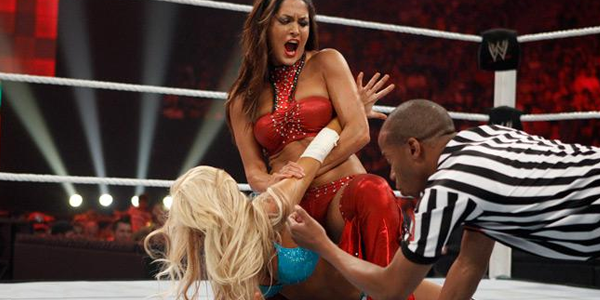 This week on Monday Night Raw, new Divas Champion, Kelly Kelly faced off against Nikki Bella in a non-title match. Thanks to a lucky spin of the Raw Roulette wheel, last night’s match went from a run of the mill singles match to a submission match. Can Kelly Kelly prove the haters wrong in her first match as champion, or will Nikki Bella gets revenge for her twin sister Brie? Check out the match below:

Kelly makes her way to the ring first, and I must admit, the belt looks good on her. The Bellas are out to the ring next and their sights are set on Kelly and her shiny new butterfly belt. We cut to the Jumbotron, where Booker T spins the roulette wheel for the Divas. The wheel lands on submission match and the official signals for the bell to kick off the match.

Nikki wastes little time going after Kelly, taking her down to the mat with a kick to the gut. Nikki follows up with a hammer lock and throws Kelly into the turnbuckle shoulder first. Nikki stays on top of Kelly, taking her down to the mat and locking in a Fujiwara armbar. After lots of torquing from Nikki and lots of screaming from Kelly, the champion fights back to her feet.

Nikki tries to keep working on the arm, but Kelly fights back with a few forearms to the face of the devious twins. With Nikki stunned, Kelly trips her up and locks in the Boston Crab to pick up the victory. Post-match, The Bellas attack Kelly Kelly, but Eve runs in and clears the ring, making the save for the champion.

I must admit, this was kind of underwhelming for Kelly’s first match as champion. This was the moment to let Kelly show what she can do, but she was undercut by those pesky “time restraints”. Having dodged the Pillow Fight bullet and lucking out by getting a submission match, this was a golden opportunity for WWE to show us something new in the Divas division, but of course they dropped the ball again.

On the plus side, we did get an announcement for Kelly vs Brie at Money in the Bank. Hopefully, Brie and Kelly can put on as good of a match together as they did last week on Raw.

All in all, a lackluster night for the Divas on Raw. With any luck, next week’s tag match will impress more than tonight’s match did.