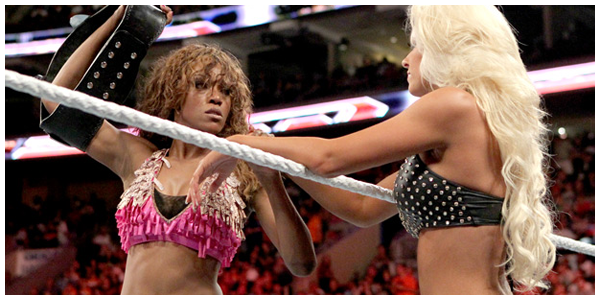 Alicia Fox‘s Divas Championship reign got off to a mostly underwhelming start, being saddled with a random mixed tag match right off the bat. This week, we see another tag team match, but thankfully it makes a bit more sense, as Alicia teams with Maryse against Eve Torres and Gail Kim. Watch the match below:

Maryse and Alicia enter together (I’m sure having to come out to Alicia’s music makes Maryse cheery), followed by Gail and Eve making a tandem entrance. Eve and Alicia start off the match, Alicia wasting no time, charging over and kicking Eve in the midsection. Two two trade blows until Eve is whipped into the ropes and takes down Alicia with a sunset flip on the return. Alicia halts her momentum, though, and sits on Eve into a pin, but Eve blocks it, and Alicia satisfies herself with a knee to the face. She sends Eve into the corner and nails her with a high knee and, after taunting the crowd a bit, hits her with a snapmare and attempts a pin, which Eve kicks out of at 2.

She brings Eve to her corner and, after an exchange of attitudes, Maryse tags in. They stare at each other warily and make it pretty clear that them teaming together doesn’t mean they’rre suddenly BFFs. I prefer that kind of heel interaction, because it just further sells their nasty attitudes if even kindred spirits can’t get along. Maryse kicks Eve and pulls her head back by the hair, tugging a bit before slamming her head first on the mat. She tries for a (extremely, extremely delayed) pin, which Eve of course kicks out of. Maryse pulls her up and rams her head into her corner’s turnbuckle, tagging Alicia back in.

Maryse holds Eve up for a kick from Alicia, and that seems to be the extent of their teamwork. She exits the ring and Alicia takes over. Alicia whips Eve into the corner and goes for another high kick, but Eve moves, causing Alicia to tangle herself in the corner while she tags in Gail. Gail comes in gangbusters, nailing Alicia with a flurry of offense punctuated by a frankensteiner. Alicia reverses an Irish whip into the ropes and seems prepped to flip Gail into a backbreaker, but Gail reverses it into a splash. She covers Alicia, who kicks out at 2.

Gail kicks Alicia and dropkicks her into the corner, Alicia looking like someone tugged an invisible string and yanked her backwards. Gail charges toward her but Alicia slips out of the ring in plenty of time. However, once she gets to the outside Eve gets right on her, attacking her. Alicia puts a stop to this when she backs her into the ring apron. She tries to take a breather, but Gail reaches through the ropes, pulling her to the ring by the hair. Maryse immediately slips in the ring, attacking Gail from behind. Gail fends her off pretty easily, but this allows Alicia to take advantage of Gail’s distraction, knocking her to the mat and waiting until the perfect moment to hit the axe kick, pinning Gail and getting the win for her team.

This match made a lot more sense than last week’s jobber fest, and made for some interesting interaction between Maryse and Alicia. It does a lot, in my opinion, to make it clear that Maryse isn’t happy playing second fiddle to Alicia. Their less-than-friendly exchanges add a bit of dimension to both of their characters, especially their face-off at the end of the match. It put them in interesting spots: Alicia, the cocky, triumphant champ, and Maryse, the bitter second stringer.

Eve showed a bit more fire in this match when she attacks Alicia outside the ring, and even though it lasted only a few seconds, it made her seem more interesting as a character. At least now she seems upset about losing the title. Last week, she kind of gave off a happy-go-lucky attitude that only served to make her seem like a lousy competitor. They need much more fire out of Eve if they want to make this feud with Alicia exciting at any level. Gail was Gail, busting out interesting moves while being the one best suited to take the fall for her team. Her time certainly hasn’t come yet, but if it were up to me, I’d be placing her in the title feud while Eve brings up the rear and takes the pins. But of course, that’s just me..

Earlier in the night, we saw more of the usual out of Natalya, Tamina, and their boys. Watch this week’s ambush below:

The Hart Dynasty comes out to the ring for a match against the Usos, but before they can even make it into the ring the Usos attack. Tamina battles Natalya next to the apron and bodyslams her onto the mat outside. That appears to be it, as the Usos retreat, but Tamina suddenly gets an idea and sprints back to ringside, tossing Natalya into the ring. She hits the Superfly splash and, satisfied, finally leaves with the Usos. The match never started, so it looks to end in a no contest ruling.

This is just another rehash of the Uso attacks we’ve seen over the past few weeks, the only interesting part being Tamina attacking Natalya and taking center stage with a Superfly splash. It puts the Divas in the spotlight, and serves to make their feud feel just as, if not more, important than the one going on between the tag teams. I have to say, though, that if they keep following this formula week in, week out, it’ll get old quick. Hell, it feels like deja-vu even now. There’s got to be more to this feud than ambushes, but I don’t think the writers have found out what that “more” entails just yet.

Both Divas feuds look to be going forward week-by-week, with no real substance being built or story being told. This could be remedied easily with some deviation from the norm, but the WWE seems to love sticking to their tried and true formulas. Unfortunately, those formulas are what got us countless meaningless tag team matches and Divas feuds that fizzled out quick and went nowhere fast. Change is good, WWE. Don’t be afraid to embrace it.