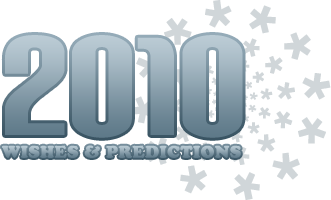 It’s hard to believe but we are already half way through 2010! The time has flown by so quickly but to celebrate the mid-year point, we are going to be looking back on the first six months of the year over the next few days. We begin by revisiting our 2010 Wishes & Predictions. Loyal readers will know that each December, we make 10 wishes and 10 predictions for the year going forward. So, let’s see how those wishes and predictions have measured up thus far…

Wishes for 2010
* Firstly, we really hope Melina has a speedy and/or miraculous recovery. If it is as serious as thought, Raw just won’t be the same without her.
Well obviously, Melina still isn’t back but we remain hopeful that July will be her month! Get well soon, Melina!

* Allow Tara to have a long and fulfilling Knockouts Championship reign. She deserves one great run with a belt!
Depending on how you look it, Tara’s January-April run with the belt was longer than her previous two runs — although it ended sourly and abruptly in the now infamous Lock Box Showdown debacle. I wouldn’t call any of Tara’s title reigns fulfilling, sadly.

* Dear WWE, that chick Gail Kim? She can wrestle rings around most of your men. Use her, push her, give her a title for chrissakes!
Well, she did make it to the finals of the Divas Title tournament back in February but I wouldn’t call that a push…

* TNA, take note: Alissa Flash. Same thing.
Err, this one was kind of a stumble out of the gate. Alissa announced her TNA departure via Diva Dirt two weeks into 2010!

* Give the proverbial ball to Alicia Fox, Daffney and Eve Torres and let them run with it. They all have a lot to offer and it isn’t just their boobs.
Two out of three ain’t bad, right? Alicia is the current Divas Champion and Eve is the former champion. Daffney did receive a nice little push against Tara going into Destination X in March but I wouldn’t call that giving her the ball and letting her run with it. Daffney still has a lot to offer and we have six more months!

* I love Saritaylor as a team but I’m kinda curious to see them in a feud. If you must break them up, give us a series of three-to-five epic matches, won’t you TNA?
These two are about to begin a feud with Sarita turning heel. Five months too late is better than never… or is it?

* SmackDown, please don’t suffer a slump. We’re counting on you!
I think we’re officially in a slump. Jump rope-gate sealed the deal for me

* Since we have just one more wish we may as well blow it on something HUGE! Title reigns for Alissa Flash, Beth Phoenix, Gail Kim, Hamada and Natalya are a must.
One out of five is decent right? No… it isn’t? :( Technically, Hamada won the Knockouts Tag Team Championship but I was thinking of singles belts when I wrote this so I won’t include that. I’m not sure if Gail or Hamada will win gold but Natalya? I’m very confident that she will and when she does, it will be extremely gratifying to watch. Hopefully in the next six months.

* It should come of no surprise that Maryse will probably hold the Divas Championship at some point in 2010.
Check!

* Something tells me Mickie may not be a Diva by year’s end. [Sidebar: Hope I’m wrong.]
Check!

* Lacey Von Erich will finally strip for Playboy, but will she be a TNA Knockout when she does?
I don’t see the Playboy thing happening given her current personal situation.

* Maria will not win The Celebrity Apprentice.
Check!

* Trish Stratus will return at some point and do a full blown storyline this time.
Well, it hasn’t happened yet and I don’t see it happening if it wasn’t done in time for ‘Mania. Maybe next year?

* A ‘Beautiful’ breakup. My guess is TBP will be no more by year’s end.
I still see this happening. We have six more months…

So that wraps my mid-year check up on Diva Dirt‘s wishes and predictions for 2010. With half a year still to go, I think I’ve done pretty well!

Did you have any wishes/predictions of your own? How did you fare?