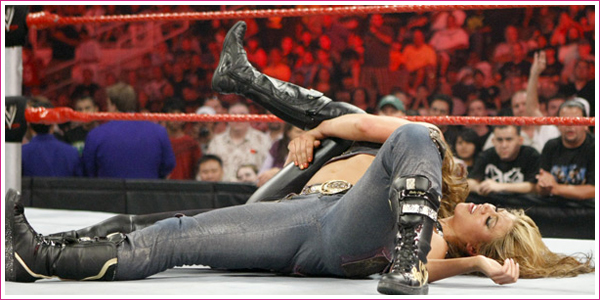 I have been less than enamored with Monday Night Raw since the Draft in April. You could blame it on lousy booking, little storyline development and average at best in-ring work. But on the night of the 15 Superstar trade, it looks as though Raw has returned to form with an excellent and enjoyable fatal four way match.

With the exception of Rosa Mendes who continues to disappoint in the ring, the other three Divas worked consistently hard and put on a really good match that has reignited my interest in the direction of the Raw brand. Mickie James finally ‘earned’ her Divas Championship match – not that she needed to earn it – overcoming Rosa, Beth Phoenix and Kelly Kelly. Also on form was the Divas Champ herself, Maryse with her sarcastic tone, I’ll talk more about that later.

This past Monday’s Raw was one of the rare occasions that the audience really got into the match, cheering and whooping for various spots, it’s a testament to the way the match was structured and the way the Divas involved pulled it off. The fatal four way concept is one rarely used in the women’s division these days, so it was definitely a nice change of pace from the standard fare of singles and tag team matches.

Surprisingly the Divas were given a decent length for their match, which much like Melina and Michelle the night before, allowed them to build up the match without having to rush to a finish at the three-minute mark. Starting out instantly after a commercial break, the four Divas go at it and it doesn’t take long for Beth to turn on her protege, Rosa. I wonder if they’ll go anywhere with that or just ignore it in the coming weeks? Though she would eventually lose, this match really helped Beth, who has been languishing in the character department for the past few months. She came across as cold & dominant.

With Rosa and Beth cleared from the ring, here came the real surprise. Friends, Mickie and Kelly went it at it too. I really like the way they’ve almost built up this friendship between these two over the past few months, they seem genuinely friendly too. When I first watched this match, I was shocked to see Kelly work so well with Mickie as they had a really good exchange of mat based moves. That was probably one of my favourite parts of the match. The girls then team up to take out Raw’s new resident jobber, Rosa with a double dropkick before being laid out by Beth.

Beth then starts to take control, while Rosa stands idly by. She’s really not a good worker, she didn’t do much to enhance this match for me, she just seemed to stay out of everyone’s way and not get involved except for the odd spot here and there.

Then came another very cool spot that got the fans riled up, a triple headlock & then Beth driving all 3 of her opponents into the corner, nicely done. Like I say, this match helped the Glamazon more than it did hurt her, she looked strong throughout. We then see a string of near falls and here’s where Rosa really shows she’s not great; she takes far too long to get Mickie into a backslide for the cover, ruining the momentum gained by Mickie and Kelly with their fast near falls. The girl just doesn’t look comfortable in the ring, she’s slow and seems to psych herself out in case she gets hurt, I guess.

As we come to the end of the match, Beth hits her Glam Slam on Kelly – I swear to God, that girl has eaten more of those than any other Diva. Mickie gives her a hurricanrana through the middle rope and here’s where things get ‘ouchy’, a baseball slide that lands Beth’s head right on the apron and you could tell that really hurt. Meanwhile in the ring, Mickie sets up her tornado DDT on Rosa for the win.

Meanwhile adding soundtrack throughout the match is Maryse at ringside and I have to be honest, I felt like I was kind of beginning to ‘get’ Maryse. Up until now her whole vapid chick gimmick was pretty textbook to me, yes she conveys her role with a lot more charisma than most, but the whole “I’m hot, you’re not” gimmick was pretty one-dimensional. But on Monday night’s commentary you could sense the layer of sarcasm that she coats onto everything she says, and it’s not something I’ve noticed before and I think it makes her gimmick more multi-dimensional. It’s not something that you can see very easily, which is why I guess I’ve never really noticed it now, but the way she was kind of riding Michael Cole and kept giggling away and kept calling Kelly ‘really pretty’, there was a backhanded nature about her that makes her character that much more multi-dimensional and complex, rather than being just another hot vapid Diva. It shows to me that Maryse is a lot smarter than her character lets on. Anyone that takes potshots at Michael Cole without him really realising deserves an A+ lol.

Really good match with fun commentary. I wonder how Gail Kim and Alicia Fox can attribute to the division when they start with the brand next week.