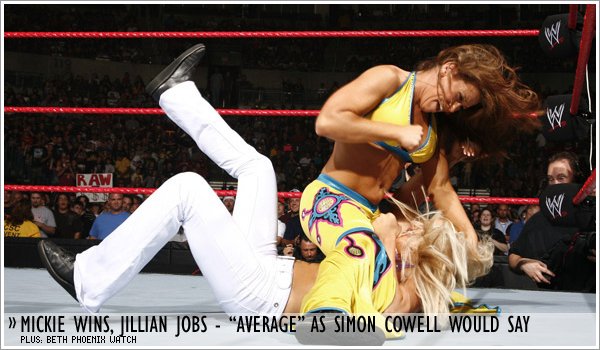 Thoughts & Reactions
With Raw more eventful and more exciting that it has ever been in the past few years, why was the women’s action so average last night?! I have been left underwhelmed for the second night in a row, after the match at Night of Champions and then the match last night on Raw. While it was nice to see Jillian get some ring time, what was the point when it’s clear what WWE thinks of her? How can the fans be interested in Jillian when WWE beats a dead horse with her gimmick and has her job 24/7? Needless to say, I don’t think there’s much point to Jillian’s career at this point in time and I don’t think WWE are at all interested in rejuvenating it. When Jillian came out, didn’t you just know Mickie was going to win this easy match? The only thing that got me through was the fact that I thought Katie might hit the ring after the match, attacking Mickie to continue to their feud. That didn’t happen either…

Later in the evening, we did get a hint that WWE will continue the Mickie-Katie feud in a backstage segment with Katie Lea and Paul Burchill, this was well done. I really like the idea of Katie being a trouble maker and Paul can’t leave her alone for five minutes without her causing more trouble! Her character is a lot of fun, I just want to see that translate into the women’s division and not in random skits putting over other Superstars. I was pretty disappointed with the lack of Layla too, I don’t think they’ve come up with anything for her, go figure.

Katie Lea: While I would’ve loved to see her attack Mickie or something, I really enjoyed their segment.

Mickie James: Not much to say here, Mickie wins, the end.