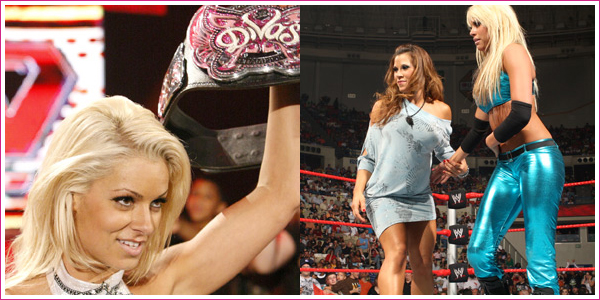 Last night (as you’ve all probably seen), I was sure that Kelly Kelly would leave Raw as the new Divas Champion. I couldn’t quite put my finger on the feeling but it just felt like it would happen. For some fans, they’ll be relieved to know that my hunch didn’t come true — as Maryse is still your Divas Champion, but for others the change was a welcome one and were left disappointed.

If I’m really honest, the feeling I got last night that we’d have a new champion actually made me realise something: I am so ready for a new Divas Champion. I think Maryse has run her course as the champion and it’s time for some new blood holding that belt. But that’s a story for another time…

This match was a rematch from two weeks ago on Raw, when Kelly picked up a DQ win over Maryse. And compared to that match, this was pretty much of the same. The in-ring work didn’t set the world alight, there weren’t too many memorable spots. In hindsight, the match itself is a blur in my mind. It’s a good thing that I always re-watch the matches a couple of times when writing the Redux, otherwise I wouldn’t be able to tell you anything about this match…

It looks as though the Raw writers have finally stopped being so bipolar and decided the feud they want to book: Maryse vs Mickie, as Mickie joined commentary for this match eyeing up the competition. This sort of stop-start booking harkens back to this time last year, with the ‘Will they? Won’t they?’ feud between Mickie and Katie Lea.

Maryse starts off showing some aggression, but instead of following up her first move with another she decides to do her usual narcissistic shtick. Things start to unravel as both Divas lock up and then for some reason, roll around the ring for a while… I don’t know what’s going on here. Kelly then takes the lead but they both get knocked out by a double clothesline, so far so slow. Maryse hits a very nice spinning backbreaker, as things begin to pick up from here. Kelly does a flip into a roll up from the corner and then takes control of the match some more. Kelly goes up top, but Maryse chops her leg and throws her off the turnbuckle in botchy fashion and hits her patented French Kiss far too close to the ropes for the win.

Post-match, we realise that poor Kelly has been just a pawn and her false push to the Divas Championship is meaningless. Maryse and Mickie staredown and dun dun dun, we’re back to pushing these two. I don’t exactly know what they’re building to considering WWE doesn’t book Divas on pay per view anymore.

A so-so edition of Raw.