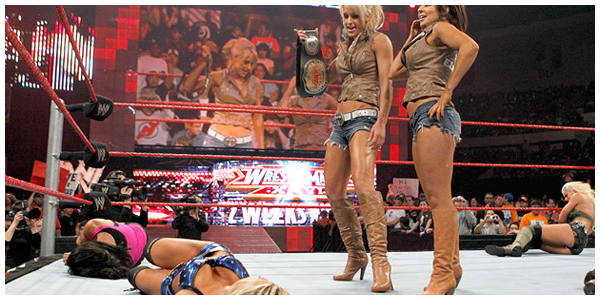 After last week’s Raw, all signs seemed to be pointing towards Eve Torres being the front runner for a title feud with Maryse, but a few inter-brand cameos may have just turned us in another direction. Is this a good direction or a bad one? Let’s watch this week’s action and judge for ourselves:

Kelly Kelly makes her way to the ring, followed by Maryse. Common sense indicates that this will be a squash match, but with how Maryse has been wrestling lately (that is, barely wrestling) it seems tough for them to pull off a real squash.

Before the match can begin, Maryse takes a moment to do her trademark pose, and Kelly climbs the turnbuckle to do one of her own. I have to say that it looked a little silly, but that’s only because Kelly’s never been the “sexpot” type, and even in her Extreme Expose days the girl seemed to lack that kind of overt sexiness. Anywho, Maryse attacks her while she has her back turned, and the match begins.

Kelly takes control rather quickly, going on an offensive streak that eventually degenerates into a catfight. The referee breaks it up and Kelly goes for a kick that Maryse blocks, flipping her backwards and back onto her feet. Kelly hits Maryse with a knee-level dropkick and then goes back to pounding Maryse’s head to the mat. This type of intensity from Kelly makes it seem like these two have had something building, even though they’ve only wrestled together a handful of times. I guess it’s just an easy way to fill up offense before Maryse eventually sneaks out the win, and that’s all there is to it.

Kelly hoists a leg onto the back of Maryse’s neck, hitting a bit of a modified version of the K2. She goes for the pin, and Maryse kicks out at 2. Both Divas get to their feet slowly, but before Kelly can grab a hold of Maryse, she gets pulled face-first into the turnbuckle. Maryse pulls Kelly up, hits the the French Kiss, and it’s all said and done. She pins Kelly for the win.

Maryse decides to beat down on Kelly a bit, but Gail Kim and Eve bust in and give Maryse a beating of her own. Gail hits a neckbreaker on Maryse and she and Eve tend to Kelly. Then, out of nowhere, Michelle McCool and Layla come running in, dressed like two Daisy Duke impersonators, and lay out Gail and Eve. They level everyone in sight and pose a bit for the crowd, heading up the ramp to meet with Vickie Guerrero, the woman who seems to have full control over Diva happenings, whether they take place on SmackDown, Raw, or Mars. Maryse joins them, looking to form a shaky alliance with Laycool and Guerrero.

The match, clocking in at exactly 1 minute, was ridiculously short, but served its purpose. It’s almost like the referee had a stopwatch and the girls were doing drills to see how fast they could go through the motions of a match. I hate to think that wrestling is secondary in importance to storyline development, but at this point it is. Maryse and Kelly likely don’t have it in them to put on a 5-star match together, so it was probably for the best that this match was limited. Still, it seems almost pointless to put on a match at all if it’s not going to break the 1 minute mark. Clearly, it was all used to introduce the Laycool/Maryse alliance, and Kelly was an easy babyface pawn to spare.

Now, this alliance (if it exists) will probably we based solely on heel status, because I’ve never pictured Maryse as someone who values teamwork. She’s always been a self-centered character, and a honest alliance with any other Diva would just seem phony. I’m sure this is all heading towards some big cross-brand match at WrestleMania, which could be quite interesting if played right. If they continue this on both shows, with the babyfaces and heels pairing up despite their brand constraints, it could make such a match feel important and worthy of a WrestleMania spot.

I feel a sense of dread when I think of how much of a clusterfuck it could be, given last year’s shenanigans, but I sincerely hope they keep the numbers relatively small. We don’t need an all-out war, just a battle. Still, I get the feeling that the WWE will shove any and as many Divas as they can into the match in order for them to get their WrestleMania payday, and they’ll take every babyface and heel they’ve got to fill up the ring apron at WrestleMania. If that’s the case, I hope they choose to keep the focus on certain Divas, making the feud at least a little compelling and not just some frantic Diva parade.

Either way, I’m just glad they seem to be taking things in a semi-interesting direction. They’ve been treading water for so long, it seems foreign for them to be planning for the future, storyline-wise. I’m not surprised in the least that the Raw writers feel that they need the SmackDown Divas to make things interesting on Monday nights–their lack of faith in the Divas of their own brand has been apparent for a while now. Let’s just see if the Raw girls get some Friday night exposure and then judge whether or not the SmackDown girls are the major leaguers and Raw are just in the minors.