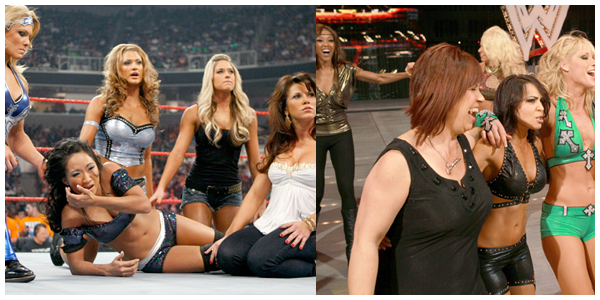 This week’s Raw brought up a lot of questions, none of which relate to anticipation towards WrestleMania or the future of the Divas division. The questions were more akin to “Why did I watch all of Raw for a 50 second match?” and “What’s on HBO? (Answer: Spider-Man)“. Needless to say, tonight’s events were a bit of a mind boggling clusterfuck, and not just because there were approximately 34 Divas at ringside for the match of varying brand loyalty. After last week’s 1-minute long match, I jokingly suggested on Twitter that this week’s match try and beat that “record”. Sadly, I believe they did, and in quite an embarrassing fashion, too. Behold:

We begin in a promising, though confusing fashion, with Gail Kim, Beth Phoenix, and Eve Torres in the ring with Mickie James (welcome back!) and Kelly Kelly at ringside. It’s pretty interesting to see Beth alongside the “good girls”, not to mention in the mix of Raw at all. Then come Maryse, Michelle McCool, and Layla, flanked by Vickie Guerrero and Alicia Fox. It’s a bit confusing, this brand crossover, especially since they haven’t even explained why it’s happening yet. This specific scenario seems like way too many “cooks in the kitchen”, in a manner of speaking, but if they were putting so many Divas at ringside at once, something interesting has to happen, right? Or so you’d think..

Gail and Michelle start off the match for their teams, Michelle kicking things off with a kick (*rimshot*), wrenching Gail’s arm. Gail twists is back and nails Michelle with the back of her elbow. She leaps up and hits a frankensteiner, nailing Michelle in the corner, trading blows with her through the ropes. She leaps over the ropes and nails Michelle with a clothesline, going for the pin and getting a 2-count. Gail preps for the Eat Defeat but Layla distracts her, allowing Michelle to go for a leg sweep. Gail counters it into a pin, but Michelle flips the pin into one of her own, but instead holding Gail and switching into a standing position, nailing the Faith Breaker in a clever reversal. She gets the pin and the win for her team.

And just like that, it’s over. Lasting a whopping 50 seconds (Beating last week’s speed record by 10 seconds; what is this, a luge race?), this is apparently what we get when we have 10 women at ringside in a cross-brand exchange on the very last Raw before WrestleMania. Was it a victim of poor time management by the WWE or just a resounding lack of effort by the bookers? It really felt like a segment with ambitions of taking up 10 minutes that was snipped down to a 1 measly minute. Either way, it’s embarrassing and makes you wonder why they even tried. It’s embarrassing and awkward for all the Divas to mosey on out to the ring, only to be worthy of a minute of screen time. I mean, what was the point of putting them all out there, besides getting some meager face time? And, by the way, why haven’t they even EXPLAINED what the SmackDown girls are fucking doing on Raw in the first place??

What message does that send when the promos building up to the John Cena/Batista “face off” lasted longer than this whole segment? Clearly, like we’ve been saying for what seems like forever, the Divas are on a whole different level of priority to the WWE’s writers. That is to say, Cena and Dave are on the top floor, and the Divas are somewhere underneath the floorboards.

Last week, with the surprise run-in by Laycool, brought up some interesting possibilites for the Divas going into WrestleMania. One could only hope that they were building towards an interesting inter-brand match. This week, it looks like they were aiming for something similar, but failed. Hell, they didn’t even get off the launching pad. But, to be fair, a space shuttle is given a 10-second count to do that, and I don’t think the WWE could spare even that for the Divas when Batista desperately needs an effectively badass, excruciatingly long slow-mo entrance. Will there even be a Divas match at WrestleMania? Who the hell knows (at the time of this writing)? At this point, I really couldn’t give a shit, because if it even partially resembles the half-assed booking seen tonight, I say just leave them off the show and save them the embarassment.

It seems like we jump from PPV to PPV, hoping that this time is when things will get better; this will be the time when the Divas get their due and get to put on a proper, impressive match, complete with appropriate buildup that makes it feel important and exciting. It’s a cycle that keeps repeating itself, and along with each turn of that cycle, our expectations get lower and lower. I’m not sure how much lower they can go, but I have a strong feeling that should we hop off this merry-go-round. At this point, anticipating anything resembling a well-planned feud or match of a decent length is clearly ludicrous. So, we may never stop getting our hopes up, but it would probably serve us well in the long run to keep in mind what the Diva status quo is at the moment: stitched together segments within the scraps of time left over by the real stars of the show, which are filled with minute-long matches and unexplained storyline twists. Hell, I’ll be honest–you might as well just go see what’s on HBO.