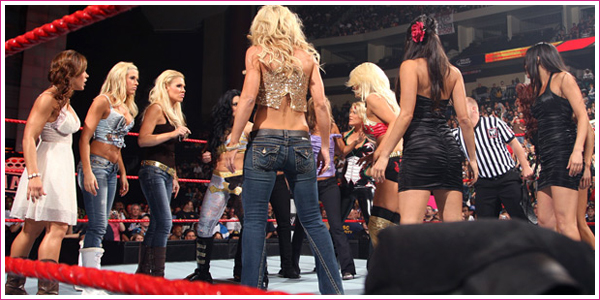 An interesting episode of Raw this week, as we saw Divas Champion, Maryse take on the Women’s Champion, Melina. Although not advertised as such, this one became a glorified lumberjack match with Divas from Raw and SmackDown present at ringside. Sorry, ECW.

It was Maryse that picked up the victory in the second champion vs champion match, we are now 1-for-1 in these types of matches with the Divas Champion coming out on top this time.

Last week, WWE seemingly set up Maryse vs Melina for WrestleMania 25. Last week, we got to experience first hand the craziness that must ensue in the creative team meetings. At the time of the Raw and SmackDown tapings, it looked like we’d see that match but somehow, by week’s end, they’d opted for a 25 Diva battle royal instead.

So coming into this week’s Raw, WWE had a misfired storyline to tie up and a battle royal to set up. So our would-be WrestleMania match becomes just another Raw match. But all things considered, it was pretty decent. Maryse and Melina have never wrestled each other one one-on-one before so we had no indication as to where this one would go. They are both talented, competent Divas but at the same time, even the most experienced of Divas can clash in the ring style-wise.

Luckily, these two shared more chemistry than the Divas involved in the first champion vs champion match, Beth Phoenix and Michelle McCool. Melina’s fiery, innovative moveset was nicely off-set by Maryse’s cocky reliance on restholds and submissions, allowing her attitude to do the work for her. The result proved to be a good mix as the pace of the match was just perfect.

Given that Maryse is still a relative newcomer to the squared circle, she really worked well with Melina and this is a match I wouldn’t mind seeing again. As for our Women’s Champion, she proved that she can be a top Diva and carry a match successfully, something that many critics don’t accredit her with often enough.

The finish to this match likely caused a very split reaction amongst fans and so it should. Both these Divas are champions, both are worthy of winning in my opinion. It’s a tough call to make but someone had to win. I’m not going to lie, I was shocked that Maryse won but I didn’t mind. There had to be a winner and it gives Maryse a nice rub for her championship reign. Melina has already toppled Beth Phoenix and is at the top of the Raw roster, meanwhile Maryse has close competition with Michelle McCool at the top of the SmackDown roster. Giving her the rub here, puts her over a little more. *There’s something else I want to point out but will do so after the cut to avoid spoilers.

The match aftermath proved far more confusing. This went from being a brand pride affair to a babyface-heel affair. O… K. The highlight of this obligatory mish-mash segment was Rosa Mendes hurtling towards the SmackDown Divas and Beth grabbing her by the leg. The whole skit reminded me of the movie Bolt, with Rosa in the spot of Bolt’s (Beth’s) number one fan, Rhino the hamster who, like Rosa, shares an eagerness to get in the mix and prove himself to Bolt.

*It should be noted that this week’s SmackDown was taped last Tuesday and features Maria & Melina beating Maryse and Michelle McCool in a tag team match. Thus, Melina losing to Maryse on Raw is counteracted with that win this Friday.