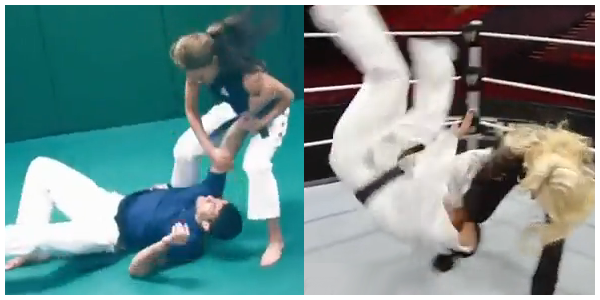 You could say that last week’s confrontation between Maryse and Eve Torres could be described as wham, bam, thank you ma’am, but in a good way. It brought a sense of unpredictability to the feud, and packed more excitement into a few seconds than we’ve seen in this entire feud (save their intense fight at ringside two weeks ago). The feud seems to be building into something more than quick little matches and petty insults, and I’m glad for that. This week’s action, while not nearly as compelling, seems to be continuing in that same direction.

We see a video package reviewing Eve’s Divas Title win from three weeks ago. We don’t often see video packages for the Divas, so that’s cool, and it probably helped to refresh the memories of fans who don’t pay as strict attention to the Diva goings-on as we do. The package continues on to tell us more about Eve. Or, rather, illustrate what they’ve been repeating in every match of hers in recent memory. You see, Eve is Smart, Sexy, and Powerful™, has brains to back up her beauty, and has a background in Jiu-Jitsu. It’s a bit ham fisted and obvious in its attempt to get fans to embrace Eve, but at least they’re making the effort. I only wish they tried to do something about it a few weeks ago when they initially decided to push her. That way, they wouldn’t have to pack it all into a video package like it’s some Miss America profile. But hey, at least they didn’t run down her turn-ons and turn-offs.

We then cut to footage from Maryse earlier in the day. She appears to be training in Jiu-Jitsu herself, but also appears to be dressed like she’s in a Britney Spears music video, so who knows what’s going on. She does pretty well at first, hitting a few take downs. Her trainer then instructs her to sweep his feet, but she can’t, and he tells her he doesn’t think she’s trying hard enough. Maryse takes the news as you would expect–she slaps him, kicks him in the knee cap, and departs, tossing out her trademark hand gesture for good measure.

The segment seemed a bit odd to me, given how rarely we see these types of segments for the Divas. Still, I like that they’re thinking outside the box. This feud seems to be developing into something more than just “Maryse thinks she is sexy and thinks [insert Diva here] is not”, and I’m so glad. It seems to be hinting at something of a “anything you can do I can do better” competition, which is definitely new territory for Maryse–she’s actually trying to be like someone else rather than being wrapped up in her own greatness. The segment could have been put together better and felt a little less awkward and forced, but I’m all for a new approach to a Divas feud. Let’s see if next week continues the trend, and if so, what part of Eve’s bio will she attempt to adopt? Rubik’s cube solving, anyone?

Earlier in the night we saw a bit of a different Diva feud developing. Alicia Fox and Gail Kim seem to have some sort of peculiar tease going on with Zach Ryder. Last week, they watched his match with Mark Henry, and when he lost, they left with the victorious Henry. This week brings up a similar set up, with Zach trying to impress Gail and Alicia by defeating Evan Bourne:

At one point, Alicia tries to interfere by knocking Evan Bourne off the top rope, but Gail stops her. Bourne wins the match, and Gail (a bit reluctantly, selling the unpredictability pretty well) hooks arms with him and leaves. Meanwhile, Ryder argues with Alicia. I think you and I can both smell a mixed tag match from a mile a way ,but will this develop into an actual feud, or just a one-off match? We’ll see, but I hope this becomes more about the physical feud between Gail and Alicia than them simply being arm candy for their respective men. The feud’s set up seemed weird, though, with Gail and Alicia being all hunky dory until Alicia tried to interfere. Its messy and sends a bit of a mixed message, but I guess I shouldn’t be complaining when there’s the possibility of a second Diva feud on Raw. Alicia and Gail work pretty well together, I think, so I’m looking forward to a match between the two. Let’s just hope this doesn’t mean that Alicia’s the “new Rosa”. That’s a legacy that doesn’t need to be followed, that’s for sure.

In a night of feuds being developed outside the ring, I think it shows that the WWE is starting to think outside the box with the Divas. Of course, they could always regress back to the 1-minute matches, but for now I’m glad to see a be of a variety in how they’re used on Monday nights. Let’s keep the streak going, shall we?