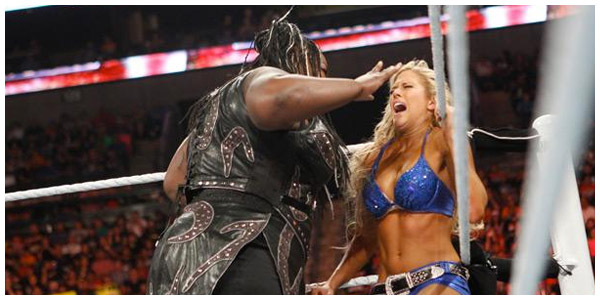 This week on Monday Night Raw, the perpetually perky Kelly Kelly found herself in a non-title match against the Divas champion, Brie Bella with Nikki Bella at ringside. As we have seen in weeks past, Kelly has made her way onto Kharma‘s list of potential victims. Will Kharma finally get her hands on Kelly this week, or will Kelly manage to slip through her fingers once more? Also, can Kelly Kelly pull out a win over the Divas Champion and move herself into title contention? Check out this week’s Divas segment below and find out:

Out first is Kelly Kelly, looking absolutely stunning in blue and not a teensy bit concerned about the fact that Kharma seems to show up in every one of her matches. I’m just saying if I was K2, I’d be looking to enlist some protection from Kharma. And by protection, I mean someone to distract Kharma while I run for my life. The Bellas are out next with the Divas title in tow. They do their usual entrance and our match is underway.

The ladies start things off with a basic lockup, but Brie gets the upperhand with a hip strike to the gut before locking in an arm wringer. Kelly fights out of the hold with a forearm to the face, followed by a backflip into a armdrag reversal. Before Brie can get back in control of the match, Kelly takes her down with a Thesz press and unleashes a flurry of mounted punches. The referee pulls Kelly off of the champ, giving Brie a chance to regroup. Brie catches Kelly off guard with a kick to the gut and throws her against the ropes. Brie begins choking Kelly, prompting the referee to interfere. While the official’s attention is drawn away, Nikki snaps Kelly’s neck against the ropes, giving her twin an opportunity to go for the pin, which Kelly kicks out of at two.

Frustrated, Brie locks in a modified abdominal stretch, looking to wear down her opponent or perhaps make her submit. Kelly fights to her feet, but Brie slams her back down to the mat headfirst. Brie tries to go for a leg drop (or was it an elbow?), but Kelly retaliates with an… ass slap? Great offense there…

An embarassed Brie charges at Kelly Kelly with a clothesline, but Kelly evades and takes her down her patented headscissors, followed by a handspring elbow. Kelly finishes off the combination with a running bulldog for a one count. Kelly pulls the champion off of the mat, but Brie breaks away and hits another hip strike to the midsection, bringing Kelly to her knees. Brie goes to hit the ropes, but Kelly trips her up and uses a unique and impressive (even though it was a bit slow to start) roll up to put the champ away.

So Kelly Kelly has a pin over the Divas Champion, but she can’t celebrat just yet, as the bitter Bellas attack her from behind. The Bellas beat Kelly down for a bit, but it all comes to an end when Kharma’s music hits; A sound that has become synonymous with
brutality in the last month.

While The Bellas made themselves scarce last week when Kharma appeared, they decided to stand their ground this week. Logically speaking, they should have a better chance since there’s two of them, right? Right? Yeah… I didn’t think so…

Kharma enters the ring and makes a beeline straight for Kelly who is laid out in the corner, completely disregarding The Bella Twins. The Bellas take their opportunity to attack the monster Diva from behind. As you probably guessed, that plan didn’t exactly work out.

After a few affecttive strikes from Brie, Kharma shoves her down to the mat full force. Nikki tries a different approach, coming off of the top rope with a crossbody. Unfortunately for her, Kharma catches her with ease. Brie sees her sister impending doom and takes off, leaving her twin to suffer a bodyslam and a brutal implant buster. And then there was one…

Kharma finally sets her sights on Kelly, who is cowering in the corner (Why didn’t you run?!). Kharma closes in on her and just when you thinks she’s about to become a permanent part of the mat, Kharma simply flicks her in the forehead and walks away laughing to end our Divas segment.

While I love me some Kharma, this squash tour is becoming a bit stagnant. I think it’s high time we get Kharma in a match, and if Kelly Kelly is going to me the one who eventually feuds with Kharma, I don’t think she should be her first opponent. She should definitely be saved for last, if that is indeed the case.

Speaking of Kelly and Kharma, I’m not suire exactly where this interaction between them is going. Kharma was on Kelly’s ass for the past few weeks, yet passed on a chance to attack her. Does she want to be allies? Does she deem Kelly unworthy of her beatdowns? Would she like to keep her as a pet, perhaps? I hope there can be some solid progression and some clarity in this Kharma/Kelly storyline next week.

As for the match, I will admit it was WAY better than last week’s affair, but there are still a few things that could be worked on. For example, Kelly and The Bellas, along with a few other Divas could stand to brush up on their fundamentals, such as basic bumps and rope running. It would really make the difference in their matches, as those are the things that stand out the most during their matches. I think Kelly needs to especially, since seems to be getting a major push against Kharma and she going to need every bit of credibility she can get if people are to believe she can go in the ring with Kharma. Besides that, I don’t have too many criticism about the match. As much as I hate to say it, it was just the standard Diva fare.

That’s it for Raw this week. Hopefully, next week we’ll get the Kharma match every one is waiting for, as well as some more direction in this budding Kelly/Kharma storyline. Until next time!