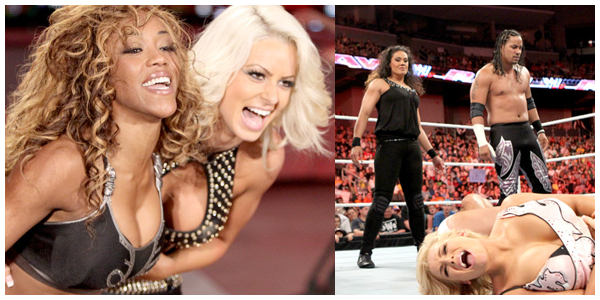 After the underwhelming Divas Championship match at Over the Limit, I was hopeful that the following Raw would pick things back up and continue the Divas Championship feud down the more unique path we’ve been enjoying these past few weeks (exhibits , B, and C. Not so, folks, because it seems that we’re back in “piss break” territory. Of course, all could turn around next week, but a week’s stay in “piss break” territory still leaves you smelling of.. well, you know. Putting it in more eloquent terms, instead of continuing with the more unique ways of building this feud between Maryse and Eve Torres, the WWE decided to book them in a tag team match, effectively packing their feud together with the one between Alicia Fox and Gail Kim. That’s one 2-for-1 sale I’m not happy about. Watch the match below:

Gail and Alicia start things off. Gail goes for a tie-up but Alicia has a better idea, booting Gail in the stomach. She blasts her wit ha forearm before irish-whipping her into the corner. When she attacks, though, she gets a face full of elbow, setting Gail up to hit a top-rope hurricanrana (How long has it been since we’ve seen one of those??). Alicia flops around, sans equilibrium, finding a corner to lean against. Gail stays on the attack, hitting her hit-and-slip move. While on the apron, Maryse tries to sneak an attack, but Gail kicks her in the stomach. Gail stops another attack from Alicia, burying her shoulder into her midsection and vaulting over the ropes into a sunset flip pin attempt. However, she can’t even roll Alicia onto her shoulders, and Fox takes the momentum, holding onto the ropes. Maryse takes this opportunity to tag in, and as Gail rolls Alicia back into a pin, Maryse slips in and kicks Gail square in the back. This of course, breaks the non-pin.

Maryse lays another boot into Gail before going for a pin of her own. Gail kicks out at 2. She hoists her up into a backbreaker and toys around with her a bit before Gail kicks her away. Gail moves to tag in Eve, and Maryse tries to stop this, but Eve ducks out of the way of her haymaker, hitting a right hand of her own before finally getting tagged in. Eve goes on a string of offense (a clothesline here, and dropkick there, and a neckbreaker for good measure) before trying for the pin. Maryse kicks out at 2, but before she can pop up to her feet Eve kicks her back down, leaping over her and hitting a standing moonsault. She goes for the pin again, but Alicia break it up.

This brings in Gail, and with the referee distracted by her, Alicia boots Eve right in the face. This allows Maryse to set up the French Kiss, hit it, and get the pin.

Familiar ending, no? It seems like every Maryse win in the past few months has had taken place in a similar sequence of events. This only serves to remind us of the months of crappy, short matches we went through earlier this year when Maryse did just that–sneak out a win in a wholly unremarkable match. The match lasted 2 minutes on the button, and felt as rushed as if the booker told them that the mat would be set on fire at the 2:05 mark. The most exciting part of the match was easily the exchange between Gail and Alicia, that top-rope hurricanrana being the high point. They busted out a few exciting moments that were more entertaining than Eve and Maryse’s work because, unlike them, Gail and Alicia were doing things that were relatively new. At least, we hadn’t seen the exact same moves performed just the night before.

Pretty much every move Eve busted out she had done at Over the Limit, and it brought a sense of deja-vu that only reaffirms that belief that Eve is more style than substance in the ring–you’ve heard that claim many times before about several Divas. They bust out flashy moves but nothing to give the match some shape. It doesn’t help that she’s hitting them in rapid succession, so that it’s all packed into a few seconds: clothesline, dropkick, neckbreaker, standing moonsault. I’m sure the condensed match time had something to do with that, but when you’re short on time, maybe you don’t need to bust out every move in your repertoire. It only serves to make them seem overused and cause them to lose their luster. I’m sure Eve is capable of more, but right now she’s coming across as being low on ammo. Maryse isn’t any different, and even though she’s got her gimmick to hide behind–she’s a heel, so she cheats!–it doesn’t make it any more satisfying.

Unfortunately, it’s as if we reached the end of the plank, and it’s nowhere to go but down. Of course, that’s a big statement when one’s only judging from two nights worth of wrestling, but I can’t help but get a bad feeling about where we’re headed. For weeks, the WWE seemed to think outside the box with this feud, advancing it through brawls and backstage segments that really sold the hate between Maryse and Eve. Now, they’ve slipped back into familiar territory–tag team matches. And, to make matters worse, they’ve combined this with another blossoming feud. Gail and Alicia, I hope, are able to branch off onto their own again, but I suppose last week’s commercial-free status was a big reason that they got a match of their own at all. I say, if you’re going to have more than one Diva feud, keep them as separate as possible. Selling them together shortchanges both feuds. Its economical from a time-saving standpoint, but the quality suffers, and tonight’s match was proof of that.

Earlier in the night Maryse has an encounter with guest GM Jon Lovitz. It was pretty much pointless, with Lovitz hitting on Maryse, speaking French to her, and then blowing her off. It’s worth watching if only for Maryse’s facial expressions:

Later in the night, in a more literal example of blink-and-you-miss-it Diva appearances, Jillian took part in guest GM Jon Lovitz’s “Superstar Search”, which was more like a drunken “The Gong Show” than anything else. Brie and Nikki Bella were along for the ride, too, more ornamental than functional. Of course, you could see Jillian’s shtick coming from a mile away–any opportunity for her to warble out a few lousy notes and the WWE will take advantage of it like it’s a chance for Santino to speak broken English and get his ass kicked. Both of those happened, by the way, but Jillian didn’t even get to open her mouth before Lovitz hit the buzzer on her:

Face time is face time, I guess, and at this point in Jillian’s career this is as much as she can probably ask for. It’s sad to see her relegated to such meager comedy bits, but it’s a paycheck, I suppose, and I don’t expect Jillian to be complaining about it any time soon. Let’s hope the next time she gets the chance to get her “I Love Lucy” on it’s for longer than 2 seconds.

But that’s not all, folks! Even later in the night, the Hart Dynasty were victorious over William Regal and Vladimir Kozlov. As they celebrated with Natalya, three people busted in and attacked them. The woman and three men took them out and each performed frog splashes on their foe of choice:

The woman, who we revealed earlier to be Sarona Snuka, took out Natalya. Her name in FCW is Tamina, so there’s a good bet that she’ll be sticking with that in the WWE. It was an unexpected debut, completely catching me unaware, and proved that the WWE still has some surprises up their sleeve, as much as I hated the predictability of the booking earlier in the night. I’m excited to see Natalya actually have some sort of feud, even though some have said that Tamina is still rather green in the ring. Fights outside of the ring and Mixed Tag Team matches could help disguise that for a while, but I hope she eventually gets up to snuff for a real one-on-one match with Nattie. After all, Natalya is such a pro she could probably get a half-decent match out of anyone. Above all, it’s great to see a new face, especially one that doesn’t look like all the rest. Here’s hoping the WWE will use her wisely. Welcome, Tamina!