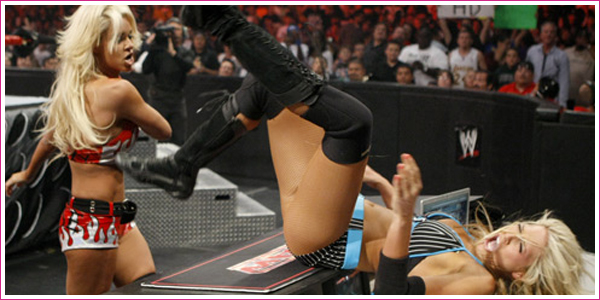 I’m going to be real frank and kick off by saying, after last night’s monstrosity of a Raw, I have no desire or motivation to waste time writing this week’s Raw Redux. So I’m going to keep it as brief as possible.

Three possible reasons last night’s Raw went the way it did:
1) In the last week, WWE fired all of the Raw writers and hired a bunch of new ones that have no idea what’s been going on in the past few weeks
2) Stephanie handed out doobies during the writing process
3) Mickie James pissed someone off and now she’s being punished

Last night’s Raw was effin’ ridiculous, nothing else to describe it. Over the past few weeks, they’ve set up a feud between Mickie James and Maryse, Mickie scored two wins over her and then when it comes to title time – Kelly gets the shot instead. Okay fine, I try to explain it away last week as a ‘swerve’ to prolong the underlying feud between Mickie and Maryse. Then there’s this week – Kelly gets her title shot, ambiguous ending open for a ‘sequel’, Mickie is nowhere to be seen. The way they left things last night definitely made it seem like they were setting up towards a feud between Kelly and Maryse.

So… what the canuck happened to Mickie? It just defies logic. There was a perfect cue in there, at the end when Maryse was retreating up the ramp for Mickie to come out and sabotage Maryse and continue their feud. But it looks like they’ve dropped that altogether and dived into a feud between Maryse and Kelly.

The match itself was poorly choreographed, the ending was so ‘WTF?’ Did Maryse make history by becoming the first person to get disqualified for pushing someone over an announce table? It was dumb. I do give them credit though, the first minute or so of in-ring action was decent. I was expecting horrible, piss-poor work but it was okay. The tilt-a-whirl backbreaker by Maryse and the handspring elbow by Kelly were good.

So instead of getting her title programme, Mickie’s head is left spinning as she is demoted to playing second fiddle to Vickie Guerrero and Santino, who by the way, have scored a pay per view match over the actual Divas.

Absolutely ridiculous and not worth wasting the time watching. I think I’ll skip watching next week’s Raw live and go on results, if I like what I read, I’ll check out the matches on YouTube.