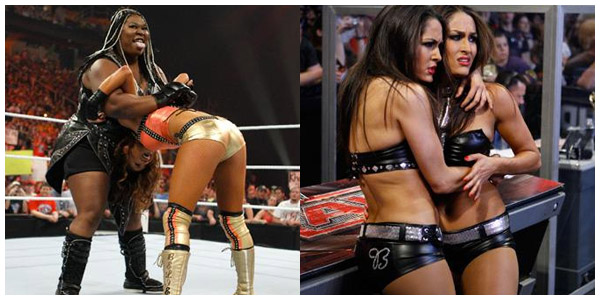 All the Divas on both Raw and SmackDown have been put on notice in the past few weeks by the force known as Kharma. Last week on Monday Night Raw, Kelly Kelly barely managed to escape the wrath of Kharma. Can she get a reprieve for a second week in a row, as she teams with Eve Torres to face The Bella Twins? Speaking of The Bellas, with the Divas Title in their camp, could they be the next targets for Kharma? Check out the match below and find out!

We kick things off with The Bellas in the ring, Divas Champion in tow. Eve Torres make her way out next to a lukewarm reaction, followed by Kelly Kelly, who gets a big pop from the crowd. (Awkward…) After a quick Maxim Hot 100 plug, the official signals for the bell (Is that Nunzio?!?!?!) and our Divas tag match is underway.

Kelly and Brie (I think… Seriously, can you ladies get some monogrammed gear please?) start off the match for their teams with a lockup, which sees Kelly getting the upperhand. However, before Kelly can capitalize, she’s distracted by Nikki on the apron. Brie takes advantage of the distraction and lays Kelly out with a double axehandle followed by a few stomps. Brie drags Kelly to her corner, tags in Nikki and goes for an awkward looking team dropkick for a near fall.

Nikki tries to ground Kelly with a clubbing blow to the back, but Kelly manages to retaliate and hit her signature headscissors. Before Brie can interfere, Kelly takes her out with a forearm and goes back to work on Nikki. Kelly come charging across with a handspring back bump, followed by a bulldog, taking down to the mat once again. Instead of going for the pin, Kelly decides to play it up to the crowd, which allows The Bella to attempt “Twin Magic”. Unfortunately for the twins, they get caught and Eve runs in and takes out Brie Bella.

In all the confusion, Nikki tries to get the jump on Kelly with a rollup, but K2 reverses it and picks up the win for her team. Eve and Kelly rejoice in their victory, but the celebration is cut short when Kharma music hits. As Kharma makes her way up the ramp, The Bellas hide behind the ring, waiting until the just the right moment to take off Roadrunner style (Smart girls!) In the meantime, Kelly is cowering in the corner much like last week, but Eve Torres decided to try and fight off Kharma. Bad move.

Kharma lays out Eve, as Kelly jumps outside the ring. Kharma gives chase, but Kelly takes off, leaving her partner, Eve, at the mercy of Kharma. Kharma gets back in the ring and finishes Eve off with an Implant Buster to end the segment.

First off, let’s get into the match. I didn’t like it at all. It started off very sloppily, especially the dropkick combo by The Bellas and Kelly’s rope running. I’m not sure why things went so awry, as I think these girls do well in the ring, but it was borderline painful to watch. Hopefully, they can redeem themselves next week.

As for the Kharma segment, I’m in two minds about it. I loved the fact that she attacked a babyface Diva this week. It shows she has no alliances and that no one is safe. That said, I’m confused as to who WWE is planning to have her feud. You would think that she would be gunning for the Divas title, but up until now Kelly Kelly and Layla have been the common denominators whenever she appears. Hopefully, next week on Raw or this week on SmackDown, we can get something a little more clear cut in terms of direction.

This week Raw was pretty mediocre, in terms of the Divas. While the segment with Kharma was really good, it was canceled out by a poor showing in the tag team match. Here’s to hoping that the SmackDown Divas can pick up the slack on Friday.