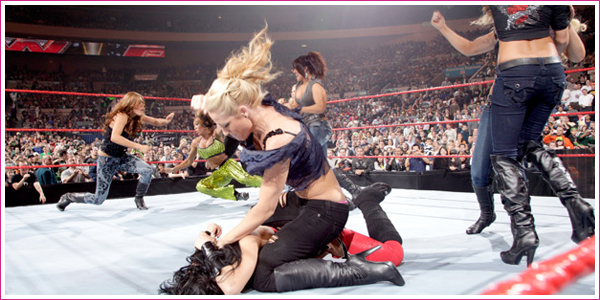 With just two weeks of buildup, we finally have our ~big~ Divas Championship match, pitting champion Melina against challenger Alicia Fox. Will this match live up to fans’ expectations, or will it–like its own build-up–be a mere shell of what it could be? Needless to say us Diva fans are used to disappointment, but we still hope for the best (against our better judgment). Let’s see if this match delivers:

Of course a big one-on-one Divas Title match in Madison Square Garden was too good to be true, because soon after Melina and Alicia’s entrances it is announced (by 30 Rock’s Judah Freedlander) that this will be a Lumberjill match. No, adding Lumberjills (as we’ve learned numerous times over) does not make a title match ~epic, it just sucks the attention away from who it should be on: the challenger and the champion. I understand that this is meant to build up Survivor Series, as the lumberjills are the participants in Sunday’s match, but surely there was a way to have this match and buildup the other match without needlessly combining them? I was actually looking forward to a good, long one-on-one Divas match for once and this move just neutered the match from the get-go.

Alicia starts the match by kicking Melina in the stomach and attempting to toss her out of the ring. Melina, however, gains control and tosses Alicia out to the wolves instead (Somehow I doubt throwing Melina out to the babyface side would’ve accomplished much of anything). Alicia dashes back into the ring before any of the lumberjills can touch her, taunting them when she’s safely back in the ring, and getting rolled up by Melina for her troubles. She kicks out, and attempts a clothesline that Melina matrixes away from. She continues on an offensive drive until Alicia tricks her, allowing her to fall out of the ring to the heel side. Melina takes a beating from the heels and the babyfaces come to her rescue, allowing her to be rolled back into the ring.

Alicia tosses Melina by her hair and goes for the pin (“Not very logical”, says Spock). She attempts to lock Melina into a hold, but Melina drives her into the turnbuckle. When Alicia charges after Melina, she’s met with a flapjack and a series of clotheslines. Alicia irish-whips Melina into the corner and gets two boots to the face, but is still able to counter a charge by Melina into a tilt-a-whirl backbreaker. She goes for the pin, but only gets a 2-count.

She again lifts Melina up, but Melina uses her momentum to swing around Alicia and position herself for the Last Call, hitting it, getting the pin, and successfully retaining her title. As Melina is handed her belt, the heels invade the ring, with Michelle going after Melina and pounding her in the back of the head so fiercely it seems as if their long feud is still going strong. A brawl ensues with the faces battling the heels until the heels retreat. The faces celebrate Melina’s win with Freedlander, who busts out some dance/karate moves.

Well, it figured that the WWE wouldn’t allow the Divas to have an actual long, well-developed match. I don’t want to sound cynical (too late!), but this one, even with the minimal hype it had, was expected to at least be a bit longer than the usual piss break-length matches we’ve had as of late. I guess with build-up that amounts to a Diva winning random #1 contendership battle royal and a few singles matches while the champion sits around backstage doesn’t really deserve a big match, but we were kind of hoping for one anyways. It’s unfortunate that it was sacrificed, in a sense, for Survivor Series buildup, because the other Divas’ presence at ringside really took the air out of the sails of the match. It didn’t feel like a big Divas Championship match anymore. Rather, it felt like a tossed-together singles match in which the WWE could easily add in the other Divas at ringside for some half-baked attempt at PPV buildup.

Those hoping for a big push for Alicia may have to wait for a while–it didn’t look like the WWE had any interest in making her look strong in this match. It’s probably too soon to say, but does this make it twice now that she’s had a one-and-done push? The match was quick, unremarkable, and barely even felt like a title match. But hey, at least there were no botches (which is a pathetic statement in itself when you think about it). Why couldn’t they schedule some other match this week for the multi-Diva infusion and save the title match for the night after Survivor Series? That PPV match itself could have served as proper build-up for a big-time Divas Championship match. Why did they rush it so quickly? Oh, yes, last night’s Raw was in Madison Square Garden. I guess they needed to hold the match in that epic venue to make it seem important, because it sure as shit didn’t feel important on its own.