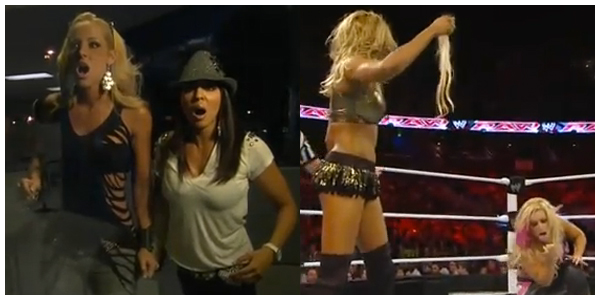 Last night’s edition of Monday Night Raw was a solid show overall, but was very good to the Divas in particular. Not only did we get a solid match, we had several entertaining segments, as well. First we got a segment featuring the new Divas Champion, Natalyaand the former champions Lay-Cool. Check out the segment below:

Pretty good stuff here in this segment. I found Lay-Cool’s diva act pretty funny and seeing them get shut down by security was also pretty funny. Hopefully, this is a sign that Lay-Cool won’t be such a strong presence in the Divas division for the time being. I like Lay-Cool as characters and competitors, but they have pretty much been running the division. It will be a nice change of pace to see some of the other Divas get into the title picture.

Immediately after the Lay-Cool segment we got another Diva segment, this time involving Tamina and Santino. Since Santino was so depressed after his loss at Survivor Series, Tamina decided to show off her mad ukelele skills and serenade the ‘Milan Miracle’.:

Wow. This has to be one of the most random things I’ve ever seen, which is the most entertaining part about it. A few months ago, I would have never thought I’d see Tamina strumming a tiny guitar and singing to Santino, but here it is. Hopefully, WWE can finally go the distance with this Tamina storyline, because I can really see it bringing the laughs in the future.

Last, but not least, Melina completes the trifecta in a segment with John Morrison, wishing him luck in his King of the Ring qualifier:

As I said on last night’s Post Raw Show, I’m not a big fan of real couples being used as on-screen couples (look how well it worked out for Lita and Matt Hardy), but Melina and Morrison have some good chemistry and I’m curious as to how this will play out in the end.

Now that we have the side dishes out of the way, it’s time for the main course. In her first match as champion, Natalya faced off against former champion, Alicia Fox in a non-title bout. Can Alicia sneak her way to a win or will Natalya come out on top? Check out the match below:

Out first is Natalya, looking great with her brand new title, followed by Alicia “Hungry Pirahna” Fox, who is as confident as ever. The Divas stare each other down for a bit, before the referee rings the bell, signaling the start of the match.

Natalya charges at Alicia, locking in a waistlock immediately, but Fox manages to get to the ropes and bump Natalya off, sending the champ rolling backward. Alicia thinks she has bested Natalya, but little does she know Natalya has neckspringed back to her feet and is waiting for her to turn around. Alicia finally turns around and is sent flying across the ring via monkey flip. Natalya rushes forward to keep the heat on Alicia, but Alicia pulls her forward sending her crashing into the turnbuckle face first.

Sensing that she has the upperhand, Alicia goes on the attack, slamming Natalya down to the mat by her hair, before stepping on her hair and pulling up on her arms. Natalya tries to get back to her feet, but Alicia keeps her down by stomping on her fingers. Alicia then grabs a handful of Nattie’s hair and… rips it out of her head?! Wow. I knew it was only a matter of time before we had a weave malfunction in a Divas match, but I never thought it would happen to Nattie.

Enraged by the forcible removal of her extensions, Natalya goes crazy on Alicia, lighting her up with several strikes and a few hair pulls of her own, followed by a slap to the face. Natalya follows up with a very impressive delayed vertical suplex for a near fall, before going for the Sharpshooter. Alicia sees the it coming and scrambles to the ropes, but gets hoisted into a bear hug by Natalya. Alicia manages to wiggle out of the hold and executes a sunset flip, but is foiled once again as Nattie rolls through and locks in the Sharpshooter for the win.

While I don’t think was the strongest showing Alicia and Natalya have had, I really liked the match. Natalya and Alicia have excellent chemistry with one another and it show every time they get in the ring together. Spots that stood out to me in particular were Nattie’s neckspring and bear hug. Natalya is always adding new moves to her repertoire, which is very refreshing considering a lot of Divas are content with using the same four or five moves in a match. Every time Natalya steps in the ring, I look forward to seeing what new move she’ll bring to the table. The weave spot is also a moment a won’t be forgetting any time soon.

All in all, a very entertaining edition of Raw. For once, we had good balance between in ring action and segments and all of them were entertaining. I can only hope that this week’s episode will set a new precedent; not only for the Divas, but for the entire roster.