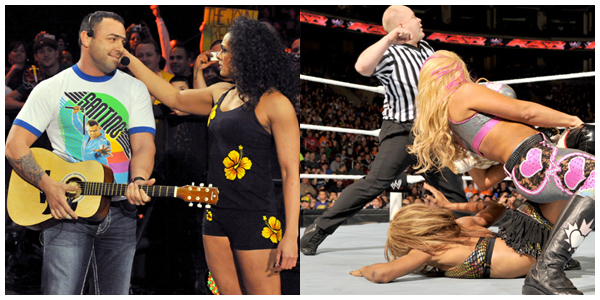 Last week, Natalya asserted her dominance over the Divas division in a unbeweavable singles match against the feisty Alicia Fox. This week she leads the team of Gail Kim and Melina against Alicia, Maryse and Tamina. Will she be able to be victorious once again? Check out the match below:\

Out first is the heel team and we are treated to a replay of the odd, yet entertaining exchange between Tamina and Santino. I should have known this was a precursor to what was to come later in this match, but I ignored it. Silly me.

Out next is the babyface team, who get a pretty good reaction from the crowd. After the obligatory posing to the crowd, the referee takes the belt from Nattie and starts the match with Melina and Maryse kicking things off for their respective teams. As we all know there’s no love lost between these two, so it was no surprise to see these two go toe to toe in the middle of the ring. In her usual cocky fashion, Maryse piefaced Melina, but gets a stiff forearm for her troubles. Melina mounts the French-Canadian beauty and they roll around for a bit, before Maryse manages to escape under the bottom rope.

Maryse runs around the ring and tries to enter on another side, but Melina grabs her by the hair, preventing her from getting away. The former champion tussle for a bit until Maryse drops down, snapping Melina’s throat across the top rope. Maryse drags a breathless Melina into the center of the ring for the pin, but only gets a two count. Before Melina can get her wits about her, Maryse drags her toward her team’s corner and tags in Alicia. This is where things get ugly, my friends.

Alicia goes on the attack, slamming Melina face into the mat and giving her a stiff kick to the midsection. Alicia chokes Melina out on the middle rope for a while before the official reprimands her. Alicia backs off shortly, but when she goes in for the kill, Melina musters up the strength to push her away. Alicia charges again and Melina evades with the matrix and scrambles to make a tag. Alicia cuts her off with a chop block (which was sold way too early by Melina) and drags her back to her team’s corner.

Frustrated, Alicia stands over Melina and shouts: “You do NOT do that to me!”, before laying in a stomp to the gut. Alicia tries to land a right hand, but Melina manages to block it (awkwardly), land a punch of her own and a very unique (and awkward) backbreaker. As the Divas struggle to their corners, the sound of awful guitar playing and even worse singing fills the arena. That’s right. You guessed it.

Santino Marella makes his way down the ramp with guitar in tow, looking to return Tamina’s serenade from last week. Maryse and Tamina jump down from the apron, leaving poor Alicia stranded in the ring. After some awkward staring between Tamina and Santino, Tamina grabs her man and essentially drags him backstage, leaving Maryse standing there open-mouthed.

In the meantime, Melina finally makes it to her corner and tags in Natalya, who goes right after the vulnerable Alicia Fox. Alicia tries to cut her off at the pass with a clothesline, but Nattie dodges and retaliates with a clothesline of her own, followed by a modified bodyslam. Seizing the opportunity, Natalya goes to lock on the Sharpshooter, but Maryse breaks it up by grabbing Nattie by the hair (without actually ripping it out). However, before any real damage can be done, Gail Kim comes to the rescue with a flying clothesline, neutralizing Maryse.

Alicia tries to get back on track with a Northern Light suplex, but Natalya sees it coming and reverses it into the Sharpshooter to pick up the win for her team.

I said it last night on the Post-Raw Show and I’ll say it again: This was not a pretty match… at all, and the biggest offenders here were Melina and Alicia. While I’ve enjoyed some of their work together, I’d be lying if I didn’t say it is very hit or miss when these two meet up. Tonight was definitely a miss. Things got better once Nattie tagged in, but even then it was a bit awkward.

Another complaint of mine is the insertion of Santino into this match. You would think in a 3-hour edition of Raw, they could spare some time to give Santino and Tamina a segment separate from the match. Hopefully this doesn’t become a frequent occurrence, like it did in the ‘Santina’ era. *shudder*

My final gripe about this match was the lack of any progression, besides the Tamina/Santino storyline. While I’m glad Natalya has finally won the title, it seems what I feared most has happened: It looks like writer don’t know what to do with her now. Now that Beth Phoenix has returned and seems to be feuding with Lay-Cool, what can Natalya do? Some are speculating that Maryse may be next in line for a shot at the belt next, I think it’s a long shot. If WWE was attempting to tease a future Natalya/Maryse feud with this match, they failed epically in my opinion.

The WWE desperately needs to established a challenger for Nattie and soon. They can only have random tag matches and squashes for so long before Natalya starts to look like a transitional champ, rather than the fighting champ she’s meant to be. Hopefully next week will be better for the Raw Divas next week.