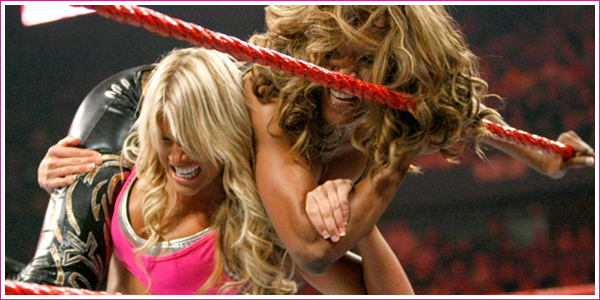 After last week’s debacle of botches and rage-inducing Hornswoggle cameos, things could only go up (I hope). Let’s take a look at how this week’s Diva action got started.

This week’s guest GMs Ozzy and Sharon Osbourne spoofed Sharon’s popular reality show “America’s Got Talent”, opening the door for any a misfit WWE toy to come out and embarrass themselves. This, of course, is right up Jillian‘s alley, so she of course showed up to croon a song for the judges, the results of which are below:

Jillian, with Chavo by her side, sang a duet of Ozzy Osbourne and Lita Ford’s “Close My Eyes Forever”. Before they could get very far the judges hit the buzzer, Ozzy saying that he was going to re-title the song “Close My Ears Forever”. Upset, Jillian told Sharon that she had always been jealous of Lita Ford. In response, Sharon told her to come to the ring (but in much more flowery a way).

As she and Chavo walked to the ring, Jillian began to sing a song by someone she deemed a “true rock icon”, belting out Britney Spears’s “Ooops, I Did it Again”. She gets in Sharon’s face, and gets a slap across the face in response. Jillian cowers in the corner as Chavo gets his due too–a chop to the head by Khali.

The segment played to Jillian’s strengths, namely making a bit of a fool of herself. But hey, no other Diva could do it quite like her, and she’s pretty funny in a shameless way. It must sting to be relegated to the goof-off spot after being in a feud for the Diva Championship just a week ago, but at least if she has to be slapped she’s getting slapped by Sharon Osbourne–it could be a helluva lot worse.

Directly following these shenanigans we have a Divas battle royal for the #1 contendership to the Divas Championship. We have Kelly Kelly, Eve Torres, the Bella Twins, Gail Kim, and Alicia Fox all in the ring. Eliminations, of course, can occur by any means, even by sliding under the bottom rope. That’s Divas battle royals for ya..

The Divas pair off, with Kelly and Alicia showing the most fire, probably left over from their match last Thursday on Superstars.

Melina watches the action on the backstage monitor (which always looks super awkward, in my opinion) as Gail takes down a Bella with a neckbreaker, only for the other to come after her. It must be exhausting for the Bellas to keep an eye on what the other is doing and avenge her if need be. Haven’t they ever heard of “every woman for herself”? I mean, they did feud together once..

Gail gets a leg choke on a Bella. I’m sorry, I can’t tell who it is from this far away, and mashing twins together is something I don’t like to do, so I apologize. Gail hangs dangerously away from the ring, and sure enough, her momentum takes her out of the ring. Kelly, who was helping the Bella hang on, apologizes to Gail, who seems to be sore about it. They exchange a look for some time before Gail finally leaves. A potential feud a-brewin’? Hm…

And you know what they say–a lady leaves, and a douche arrives (okay, so they don’t, but whatever). Jack Swagger swaggers his way to the ring, seemingly intent on saying hello to Eve. Eve, meanwhile, takes everyone in the ring down, eliminating a Bella via dropkick. God, these elimination standards are lame. It’s like they’re allowed to swim in the big boy pool, but have to wear water wingies. And, keeping with that high standard, a kick to the gut send the other Bella backwards and through the ropes, eliminating her as well.

Swagger applauds Eve, who is weirded out by it. I’m sure we’re in for weeks of stimulating tension between these two with plenty of twists and turns, so buckle your seat belts folks. Or grab a barf bag, either one. I can only hope it’s as Oscar-worthy as Maria and Dolph Ziggler’s saga.

Alicia takes advantage of Eve’s distraction, landing a double-axe handle on her head and pummeling her to the ropes before simply tossing her through them. This leaves Alicia and Kelly as the last women standing.

Kelly pounces on Alicia as soon as she turns around, picking her up in a fireman carry and carrying her over to the ropes, aiming to dump her over them. Alicia fights back, holding onto the ropes and stopping her own momentum. Alicia gets back to her feet and Kelly pummels her, sending her to the corner. She then preps for her handspring elbow, amping up the crowd. However, instead of hitting the move, Alicia grabs her in a belly-to-back hold, showing some unexpected strength in lifting Kelly over the ropes and out of the ring. Alicia wins and is your new #1 contender! Her celebration is priceless, with her dancing around with that sass that has become her signature.

The match itself was a typical battle royal–jumbled and unexciting. The eliminations were especially lame, with a kick to the stomach enough to force a fake looking tumble out of the ring. I can’t see why the WWE won’t let them have the traditional eliminations–Alicia showed that Divas can actually lift each other out of the ring, so it’s not impossible. But I guess with that, battle royals wouldn’t be done in under 5 minutes–can’t have that!

Alicia winning is a great thing. It’ll bring fresh blood to the Divas Championship feud, which even with a lifespan of 3 weeks, had been suffering. Jillian and Melina just couldn’t cut it together, so it was best to move on before it got any worse. I have to say, Alicia is a fitting replacement. However, I’m sure anyone with half a braind bould’ve sene Alicia winning this match from the outset–she was the only heel in the match. That may be evidence of Raw’s oversaturation of babyfaces, but it made it clear that Alicia would be victorious. I know that the WWE couldn’t have faith in the Divas selling a face/face feud, so face/heel is the onyl way to go, and Alicia was the only piece that would fit into that puzzle.

Stil, it’s great to see her get that kind of chance. I’m hesitant to predict a full feud with this one, because we know what happened last time Alicia won the #1 contendership for this title–she beat Gail for the title shot, and one match later, the push was over. Let’s hope her push lasts more than one match this time.

This show was miles ahead of last week’s disappointment, but we’ve still got a ways to go. At least we’re headed in a more optimistic direction–there was no Santino, Chavo, or Hornswoggle during the match! How are we so lucky? Hopefully this was an act of wiping the slate clean, so to speak, allowing for a new feud to take precedence and move on from a feud that what was only an embarrassment for all involved. Im’ kind of sad for Jillian fans because they were pushing for a push for Jillian for some time. They get it, and it’s over in the span of 3 weeks. I guess if you blow your chance, you can’t be expected to hold on to it. (Which is not to say that Melina doesn’t deserve blame in the botches, but she’s the Divas Champion. She’s not as easily dispensable in a feud as Jillian is when she can go on her merry way and croon for the guest GMs like usual.)

I’m not sure Alicia’s ready for a full-fledged title run, but we’ll see where this thing goes. I’m looking forward to what Melina and Alicia an do together (and I believe both Melanie and I predicted this in some form or fashion yesterday. *toots horn*). They wrestled a few times on Smackdown, but Alicia has grown into a much more competent worker since then, so it should be even better now. Then again, people had high hopes for Melina/Jillian, and we know how that turned out. I guess the best thing to do is keep your fingers crossed and hope good karma shines on them, warding off the botch curse. It’s real, don’t ya know?