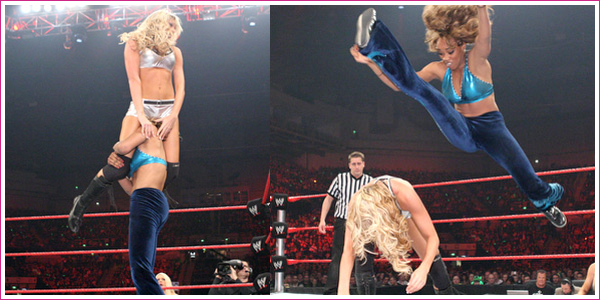 Hoping to keep her momentum going following last week’s #1 contendership win, Alicia Fox takes on the woman she beat not too long ago on WWE Superstars, Kelly Kelly. Will this match shine or pale in comparison to that bout? Let us see:

Inexplicably, Gail Kim and Jillian are at ringside, supporting their Survivor Series teammates. I’ll assume that’s the reasoning for this, because there really isn’t any other. The match starts with both girls getting in the other’s face, both looking pretty sassy. Alicia wins the sassy contest, however, because she outright pie-faces Kelly. Kelly responds with a Lous Thesz press, pounding on Alicia’s head. A bit groggy, Alicia wanders over to the corner, drawing Kelly over and sending her face-first into the turnbuckle with a drop toe hold.

She continues the facial punishment by slamming Kelly’s face to the mat and attempting a pin, which Kelly kicks out of. Kelly attempts to find some salvation in the ropes but Alicia drags her to the center of the ring as Melina (or should I say one side of Melina’s face) watches on from backstage. Melina seems impressed, but also kind of like she’s plotting murder, rubbing her hands together in evil speculation.

Alicia plants a boot into Kelly’s midsection, preening for the crowd before dragging Kelly up by her hair. Kelly fights for control though, delivering a few shots to Alicia’s stomach. Alicia puts an end to this offense, sending her to the mat with a clothesline. She again grabs Kelly by her Barbie doll locks (careful, you might pull out a few), pancaking her face to the mat. She locks Kelly into a sleeper, and Kelly fights for freedom as the crowd slowly gets behind her. She gets to her feet and drops to her backside, sending Alicia’s jaw straight onto her shoulder, breaking her free. She goes on a string of offense, ending in a Frankensteiner that she hooks into a pin for a 2-count.

Though unsuccessful in her pin attempt Kelly doesn’t let Alicia get far, hitting her finisher and latching Alicia into an overzealous pin that I assume Alicia was supposed to kick out of, but had difficulty doing so in her sandwiched position. She skirts out of it, sloppy though it may be, and sends Kelly into the top rope with a modified flapjack. Kelly crawls to the center of the ring and Alicia strikes, hitting her scissors kick (though that hit her shoulder blades more than anything), getting the pin and the win. Alicia celebrates with her sudden buddy Jillian as Kelly is consoled by the woman we wish would turn heel on her.

This match, over in about 2 bats of an eye, wasn’t half as long as their Superstars match and as a result had about half of the quality as well. The match felt far from smooth, featuring a few botches, which unfortunately have become a regular thing on Raw. Also a regular thing was the expedited feel of the match–the Divas are given a small sliver of show time and must fit their matches in the few moments DX can stand not to jump onscreen. I’m not sure the match was even long enough for the fans to take a piss break. Overall it just felt like time that could have been better spent building up to Alicia’s title shot next week. There’s not much buildup in Alicia beating a Diva she already beat a few weeks ago and Melina standing by a television monitor and smirking. Based on the buildup, I don’t hold much hope for the feud itself. Odds are, it’ll last about as long as this match did.