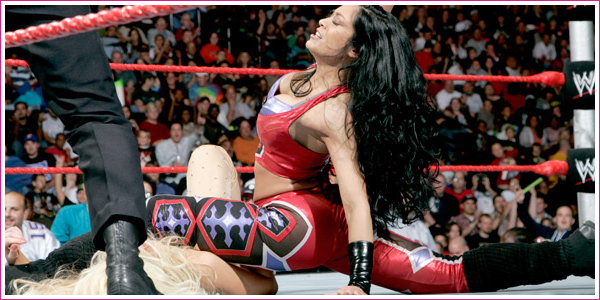 The ‘quality of life’ for Divas didn’t fare any better last night, in the first Raw following the Diva Trade. New Divas, Melina and Eve Torres were present though they didn’t exactly enhance the programme. Despite the Trade supposedly being an improvement for the women’s division, it certainly didn’t look like it. If, like me, you sat through Raw just waiting to see the Divas — you were likely bitterly disappointed when the match lasted just about as long as it did last week.

So… what was the point of the Trade? What did Eve offer that Rosa couldn’t? What did Melina accomplish in that two minute match that Mickie couldn’t do? For someone who is one day expected to be the future of the women’s division, Eve came across like the the long lost third Bella Twin. So you move the girl over to Raw just to sit and dance around with Snoop Dogg? Okay.

Fellow new Diva, Melina fared a little better — she got an actual match, just barely though. Melina defended her oh-so-prestigiously won Divas Championship against Jillian in a rematch from last week:

Why Jillian has all of a sudden been paired with Chavo Guerrero is beyond me, perhaps they are reforming the Job Squad? Meanwhile, Melina suffers an uphill battle with the stairs — but just about manages to get on the apron. Oh dear, some would consider this a foreshadowing of events.

Before the Divas can even lock up, Chavo gets up on the apron to distract the referee allowing Jillian a cheap shot on Melina followed by a nice Samoan drop. Jillian goes for a quick cover but Melina counters which brings out a nice reaction from the #1 Contender. Jillian with knees to the face and throws Melina into the corner, she charges at Melina with a handspring elbow but Melina locks in a Mickie-like headscissors [from behind however] and begins choking out Jillian. Nice, fast paced reactions there from both, I like. Melina then hits her patented toe to the head.

Melina goes up to the middle rope but once again Chavo is up on the apron which distracts Melina, in the meantime Chavo’s rival-for-life Hornswoggle comes out to the ring and pulls Chavo down. The camera seems to be all over this rather than action in the goddamn ring. Melina hits the leg-split drop on Jillian — without botches this week — for the 1, 2, 3.

What does it say when the Divas Title match is co-booked with more Chavo & Hornswoggle ‘comedy’? The funny thing is, there was something there to draw from. The work between the girls wasn’t half-bad but could’ve been so much more. Too short. Not enough attention. It just goes to show that there are sparks of excitement to be had in the women’s division but it’s quashed by WWE. If you put these two Divas in the ring and just gave them a few uninterrupted minutes, this could have been a really good match, I think.

But who wants to see girls wrestle when we can see them dance with Snoop Dogg? That little dancing skit lasted the length of the match and the Divas multiplied! This time, Gail Kim and Kelly Kelly joined the band of generic babyface Divas.

Next week: Melina & Hornswoggle vs Jillian & Chavo in the battle to end all battles. *