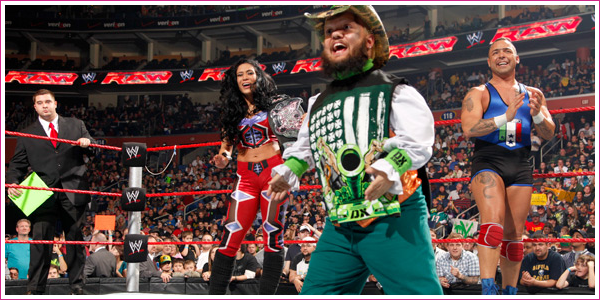 NOTE: Ladies and gentlemen, do not adjust your computer screens–this is Erin doing the Raw Redux. Melanie and I have decided to switch shows in order to better fit our schedules. From now on, I’ll be writing for the red team and she’ll be working Fridays.

After last week’s lackluster Diva Championship rematch between Melina and Jillian, it’s safe to assume that the fans were hoping some real Diva action (a little less Chavo/Hornswoggle, a little more actual wrestling) this week to let Melina grow into her position as new Divas Champion. Well, if you got your hopes up you might want to grab a ladder and go get ’em, because they’re gonna be hanging there for a while–it looks like we’ve got more unnecessary Superstar involvement this week as well, as Santino’s teaming with Melina to take on Jillian and Chavo:

I must not have been paying close enough attention to Raw, because Santino being a babyface kind of blindsided me. I guess his act is so cheesy it might as well be used to appease the fans. I wonder how long it’ll be before he’s shooting out t-shirts in between matches.

Anywho, enough with that. Santino and Melina make their way to the ring (to Melina’s music), followed by Chavo and Jillian (to Chavo’s music.. I guess it’d be too odd for Chavo to come out to the music stylings of Jillian, though it would’ve been cool for both Divas to get their full entrances, girl power~~ and all of that.) The match starts with the men, while Melina and Jillian play cheerleaders on the outside.

After Chavo takes one suckerpunch too many, Jillian eventually tags herself in. According to the ~rules Melina must now come in, but according to heel schtick (which, strangely, is followed more often), Jillian must first try to fight Santino. She slaps him in the face, and being the gentleman he is, goes and tags in Melina. The Divas get right into it, trading blows until Jillian goes for a haymaker that Melina bends back and avoids (the Melinatrix move?).

Jillian goes to pick up Melina, who seems to go for some type of hurricanrana, but can’t get a good hold on Jillian (translation: botch). She lands on her feet and turns it into an armbar, but Jillian clotheslines her before she can lock it in. God, these girls just don’t have any luck together, do they?

But before they can redeem themselves, out comes Hornswoggle to… do the DX chop? Really, what’s his reason for being out here, other than to further terrorize Chavo? I don’t get it. Does he think the fans are just dying to see him inject DX into the 95% of the show they don’t already take up? Whatever the senseless reason, he seems to have distracted Melina and Jillian a bit, as when Melina attempts the Last Call she nearly take off her own head. Was that even a Last Call? I guess you could call it a delayed roll-up.

• Melina was going into the move to do the Last Call but couldn’t get positioned right after attempting to do a 180 whilst on Jillian’s back.
• Her legs didn’t manage to get wrapped around Jillian’s midsection, as she couldn’t remain upright.
• After grabbing Jillian’s ass to try to stay up, she had to place her hands on the mat into order to actually stay on Jillian.
• Jillian’s backward momentum sent her back into a roll-up pin. Wisely, she just grabs the ropes instead of even trying to sell a pin from that clusterfuck of a move.

Was I even close? Who knows.. But back to the match, because it isn’t over yet..

Both girls get to their feet, and Melina decides to hedge her bets, grabbing Jillian into the Primal Scream and hitting it. She gets the pin and the win for her team. As they celebrate, Hornswoggle wants to soak up some of the adulation too, doing the crotch chop so much he might actually bust open a time vortex and send us back to when DX was actually relevant and people still wore Zumbas and listened to the Spice Girls. He gets handed a green envelope, but I really don’t care what’s in it, so I’ll end the review there.

It’s become pretty clear to me that the Divas division on Raw is pretty much a sideshow. I don’t mean to be melodramatic but for years now it’s seemed that while the Divas wrestled on their own at times, whenever a comedy act needed time on the show, they’d shove that in with the Divas. It sort of stopped recently, but it’s definitely back now. It’s just ridiculous and insulting that the girls can’t wrestle a simple match on their own (for two weeks running now) without a Superstar being added in to act goofy and grab attention from the actual match. Add that to the other girls acting as escorts to the weekly GM and you have a bunch of senseless Diva appearances on Monday nights.

SmackDown may have 4-minute long matches, but at least their affairs are kept separate from whatever jobber fuckery they’ve got going on with the Superstars. I’d love it if Melina and Jillian could actually have a feud without Santino, Chavo, or goddamn Hornswoggle sticking their noses in, but I don’t see that happening too soon. It seems the WWE higher-ups feel that the only sure fire way to make sure the fans get into a budding Divas feud is to put the comedy acts in. Maybe once Melina and Jillian get further into their feud they’ll be able to go off on their own, but with how botch-filled their matches have been, will they get that chance?

Of the three matches Melina and Jillian have had on Raw these past few weeks, every single one was disjointed and ugly. I don’t get it–is there a hex on Raw’s Divas? First Mickie and Gail’s epically bad encounter, then Mickie’s loss of “fire” and subsequent messy matches, and now Melina and Jillian’s toxic chemistry. We could probably get a better feel of them working together if they got more than the length of a piss break to wrestle in. Until then, we’ll probably get botches out the yin-yang. Someone reverse this curse! Call in a witch doctor or something! You can even sacrifice Hornswoggle to the gods–I wouldn’t mind!