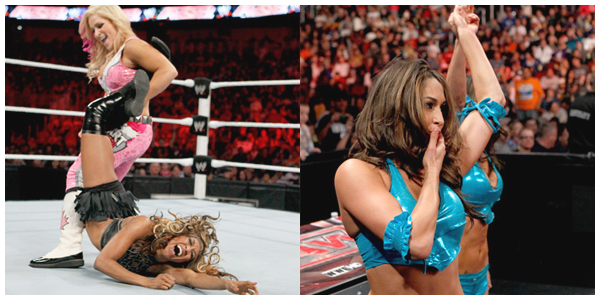 After a decent showing and a controversial finish at Hell in a Cell, Diva fans were looking for some storyline progression in this Natalya/Lay-Cool rivalry. Well that simply wasn’t the case. Instead we were treated to a couple of lightning fast matches and a heaped helping of confusion on the side. First up, Natalya faces off against Alicia Fox in a match that flew past so fast, it broke the sound barrier:

We start off with both Divas already in the ring and neither one get so much as an introduction. The referee signals for the bell and Alicia goes on the attack with a flurry strikes. Natalya reverses an Irish whip to the turnbuckle, but gets a kick to the face for her trouble.

Alicia goes to the second rope, looking to take Natalya out with a flying crossbody, but Natalya catches her in midair and charges toward the corner with Alicia in tow. Alicia manages to wiggle free, but Natalya takes her down with an elbow, followed by a discus clothesline. Before Alicia can get back to her feet, Natalya locks in the Sharpshooter for the submission win.

After last night’s match, I was sure that Natalya would have some sort of interaction with Lay-Cool. What was the point of having such an open-ended finish if you aren’t going to follow up? The only explanation I can think of is that they wanted to make Natalya look strong. Even so, a 45 second match and little to no mention of the night before? That’s not a good sign. Not to mention, the Divas match that came later on in the night made the situation that much more confusing. Speaking of which, that leads me into our second Divas match.

Although Co-Divas Champions Lay-Cool didn’t have any interaction with Natalya last night, they were booked to face The Bella Twins in tag team action and if you think you know how this ends, you’re probably wrong:

We come from commercial to see The Bella dancing in the ring as they await their opponents. Lay-Cool’s music hits and seconds later we hear the duo screech their trademark line: “FLAWLESS!!!” It’s at this where the at-home audience and fans in attendance painfully realize Lay-Cool is equipped with microphones tonight. As they come down the ramp, they inform us that will be calling commentary on their OWN match. Oh joy…

As Lay-Cool get in the ring, the live crowd seem extremely uninterested and slightly annoyed at the concept of Lay-Cool calling their own match and I can sympathize. The referee signals for the bell and the match is underway with Michelle and… um… erm… one of The Bellas starting the match off.

Michelle goes on the offense immediately with a kick to the gut and a blow to the back, sending Bella #1 to one knee. McCool whips her across the ring and sets up for a back body drop. Little does she know, Bella #2 has made a blind tag. Bella #1 manages to slow her own momentum and hits McCool with a solid kick and Bella #2 follows up with a dropkick. Bella #2 hits a spinning elbow and takes a moment to kick Layla, who has been shrieking and yelling this entire time, silencing her momentarily.

Bella #2 turns her attention back to Michelle, hits a facebuster and goes for the pin. It looks like twins have this in the bag, but Layla runs in to make the save. Bella #1 comes in and grabs Layla by the hair, but the referee forces her to leave the ring. Layla uses this distraction to kick Bella #2 in the head, before going to check on Michelle. As the referee tries to get a concerned Layla out of ring, Bella #1 cast some “Twin Magic”, rolling her sister out of the ring and taking her place on the mat. Michelle goes for the pin, but Bella #1 reverses it into a crucifix pin for the win, giving the phrase “upset victory a whole new meaning.

The outcome of this match defies logic. It makes absolutely no sense at all. Nothing against The Bellas, but why are they getting a match against Lay-Cool? Furthermore, why did they win? After defeating Melina, Beth, Kelly Kelly, etc. why have Lay-Cool lose now to The Bellas of all people. If Natalya had made a run-in and cost Lay-Cool (perhaps by throwing her shoe) I would have understood. But what is the significance of having Lay-Cool lose this match? Is the WWE pushing a Bella/Lay-Cool rivalry? Where does this leave Natalya? This Raw has left me with so many questions and not even one answer. Speaking of questions, who the hell signed off on Lay-Cool doing their own commentary? I mean, really?!

Overall, Raw was a big stinker this week, and not just for the Divas. Nothing on the card made any sense, except the Cena/Nexus storyline which I’m sure creative exhausted all their efforts on this week. Usually I would make some sort of prediction about next week, but I have no idea what may happen next week. Maybe Kelly Kelly will get a non-title win? Rosa Mendes will win the title in a jump rope contest? Or maybe, just maybe, we’ll get a match and a story that actually make sense…. No, that’s just silly.