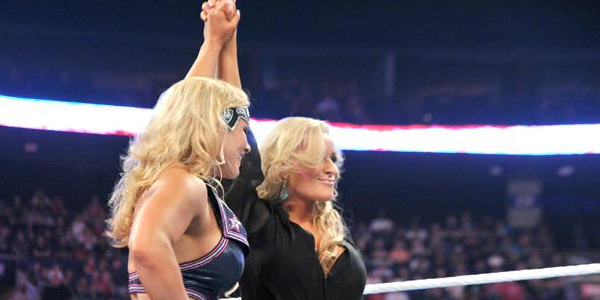 This past Sunday, all hell broke lose on Twitter as several of the Divas used the social networking site to their advantage to express their opinions over a certain controversial article posted by WWE.com. To say things got out of hand would be an understatement, but it left us fans on the edge of our seats practically begging the WWE to turn the article into a storyline. While it didn’t necessarily get turned into a storyline, the ‘E mentioned the article and the Divas’ reactions to it which is a huge step for them and the direction of the division itself. Raw continued on with the crowning of a new, yet familiar number one contender and a Night of Champions match was set. Kelly Kelly will take on Beth Phoenix in about two weeks, as Beth defeated Kelly’s BFF Eve Torres in a forgettable match. What wasn’t forgettable about the night was the fact that third-generation Diva, Natalya, absolutely took it to the champ on commentary. Lets take a look at what went down…

The match starts off pretty quickly with Eve and Beth locking up, and Eve falling victim to Beth’s strength. Nonetheless, Eve gets back and goes in for more, and the two girls begin jostling back and forth for position. Eve tries to get Beth in a side-headlock, but Beth sends Eve across the ring and when she comes back off of the ropes, Beth takes her down a hearty clothesline. She goes for a quick cover while the camera stupidly cuts away to shot a Natalya, but Eve is able to bridge out. Beth launches herself in the air, but Eve catches her with her feet while the two girls have their hands still locked together. What happens next is something I can’t really describe because I’m not sure what Eve and Beth were going for. It ends up being a clear botch, but they compensate pretty well with Eve kicking Beth in the stomach, bringing her down, and flipping over for a pretty pin. Beth powers out and both girls get back to their feet. Beth swings wildly at Eve and misses, and the booty-popping Diva takes advantage by nailing Beth with a kick and forcing her back to the ropes with a forearm.

Trying to keep her momentum going, Eve attempts to throw Beth across the ring. It doesn’t work, and Beth uses Eve’s advantage against her and slings her shoulder first into the turnbuckle. Beth gets out of the ring and begins yanking and jerking Eve’s arm, then she takes it and slams it right into the steel. Ouch. We get another shot at commentary so I can’t tell you what happens next, but we cut to the middle of another pinfall attempt. This time is Beth over Eve, but Eve is able to get her shoulder up. Again we go back to a camera shot of Natalya and Kelly, but once we return to the match, Eve gets laid out with an absolutely sick kick to the face. She goes down like a ton of bricks and Beth keeps trying to injure Eve’s already hurt arm.

Eve, bless her, somehow manages to fight back and levels Beth with a kick of her own. She goes back on offense and gets Beth down with a clothesline, then follows it up with a running somersault. She hooks the leg and nearly gets a three count, but Beth is able to kick out. Reckon the jolt of almost losing fires up Beth because she bullies Eve in the corner and starts choking her. Eve fights back and once Beth staggers back, Eve leaps on the bottom rope and tries to nail Beth with a cutesy little kick. The Glamazon ducks and is able to catch Eve in her clutches. She pulls her to the center of the ring while Eve struggles, and ends up laying Eve out with a painful, sloppy looking Glam Slam. Beth picks up the victory and celebrates her win, and Kelly leaves the broadcast area to go check on Eve.

Beth sees this going on and kicks the ropes to get 2K’s attention. Kelly isn’t amused, and the newly crowned number one contender begins to trash talk the current Diva queen. Kelly fires back with words of her own but she is quickly taken out by Natalya, who comes up behind her. The Canadian takes Kelly and slams her head off the apron, then to add insult to injury she jerks her down, causing Kelly to strike the back of her head on the mat. Eve and Kelly wither around on the mat in pain while Natalya and Beth celebrate how awesome they are in the ring.

First, can I just say that Kelly and Natalya looked amazing! I wonder if our favorite shopaholic Diva picked up her gorgeous dress while in Paris this weekend? Any comment, Nattie? Oh, and I want Kelly’s ankle boots.

Now that the superficial comment is out of the way, let me just say that normally I’m not a fan of commentary catfights. This time, I’m glad we had one because Beth and Eve do not mesh well together. I’ll admit that watching the match a second time with Kelly/Nattie on mute made me realize that it wasn’t as bad as I originally thought, but it still wasn’t great. When one girl is selling for the other, the action is great. But when they hook up to try and pull off something flashy things just don’t go well. They aren’t on the same page, timing wise, and that’s unfortunate because Eve and Beth are both great workers. They showed it in what I’m going to call their solo parts of the match. Eve grows on me the more she competes in singles matches and Beth just goes without saying. Unfortunate match with a predictable outcome but the commentary and post-match shenanigans were great.

I kind of wish it was Natalya who was going to get the chance to challenge at Night of Champions because she’s just such a phenomenal heel. The girl oozes sass and attitude, and of course I appreciate that. Either way, Beth and Kelly have already proved they can bring it at a pay-per-view and I’m looking forward to seeing part two. I loved their match at SummerSlam and I’m hoping that this one will be even better. Congratulations to Beth on her victory.

But that wasn’t all. The Bella Twins, Brie and Nikki, fresh from their Twitter controversy on Sunday, were in a backstage segment with WWE Champion Alberto Del Rio.

This one doesn’t really need any commentary, does it?

Until next week, Cryssi out.