Recapping Brooke on ‘The Amazing Race’: Episode 11, “Hooping it Up” 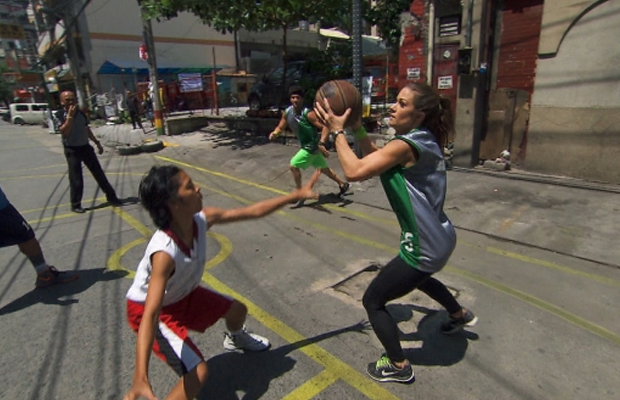 Each week, as long as Brooke and Robbie E are in The Amazing Race competition, we’ll recap the newest episode, updating fans on where #TheWrestlers stand in the race.

This week, the final four teams stay in Manila, being directed to a park to get the leg’s first clue. Brooke and Robbie depart last, having come in last on the previous leg.

They almost get on the wrong jeepney, which would have taken them in the opposite direction.

The Sweet Scientists and The Dentists end up having jeepney problems of their own, putting them far behind Brooke, Robbie and The Soul Surfers.

Brooke and Robbie run into their speed bump, which they “earned” by coming in last on the previous leg.

They must fix a cart and load cargo onto it from another cart.

They complete the speed bump quickly and move on to the leg’s detour. Meanwhile, The Scientists and The Dentists are still dealing with their jeepney issues.

They’re presented with a blind choice between detours: “This” or “That”. The “This” detour puts teams in a game of single-hoop basketball. They must play until they score 21 points. The “That” detour requires teams to compete four laps of a course on a bicycle with an attached sidecar in under 17:55 seconds.

Brooke and Robbie choose the “This” detour and complete it in good time, Brooke making great shots despite not having played basketball in ten years.

They finish before The Scientists and The Dentists get to their “That” detours. Their next clue directs them to find a marked jeepney in the Divisoria Market.

They pass The Surfers, who cannot find the area of the roadblock after they lose track of their clue. They end up wandering around the market while Brooke and Robbie head into first place.

The roadblock requires one team member to carry coconuts and brooms to three different areas. Robbie takes the challenge and takes a few moments to figure out where he needs to deliver them. He also needs to double back get the required number of brooms and coconuts.

Brooke and Robbie then are directed to the leg’s pit stop, Fort San Diego. They frantically try to stay ahead, urging their driver to go faster. Brooke jokes about having labor pains.

They arrive at the pit stop in first place, making history as one of the only teams to start a leg in last pace and finish it in first place.

In a twist, though, for the first time in Amazing Race history, they must start the next leg of the race immediately. They’re instructed to fly to their final stop: Los Angeles, California.

Brooke and Robbie live to race in the finals!

The Amazing Race‘s season finale airs next Friday at 8pm ET on CBS.

What did you think of this week’s episode?