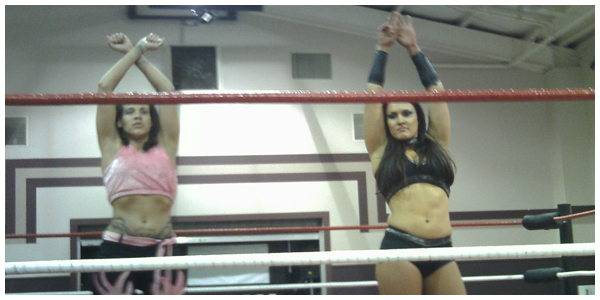 River City Wrestling held a show yesterday in Texas with Alissa Flash and Mercedes Martinez on tap. Results and pictures below courtesy of Brandon.

Last night, everyone expected some intergender action from Alissa Flash as she was suppose to take on Jax Dane and Ray Rowe for the RCW title. Frankly, that wasn’t the case. The night started off with RCW founder Brandon Oliver, and co-commissioners Jeremy Sage and Ray The Voice the ring. Ray the Voice, along with Ray Rowe, announced that Alissa Flash was removed from the title match because he want no “broads” to represent the company as champion. He had paperwork to where Flash can’t compete for the title. That enraged Sage, and he turned heel, quit his job as commissioner and stormed out. Oliver agree to make the match “No Countouts and No DQ” for Jax Dane vs. Ray Rowe. BOOOOOOOOOOOO!!!!

After the first match, Ray the Voice was in the ring, and out comes Alissa Flash, all pissed off. She said that Ray screwed her out of the title, twice now, and either demands to compete with any male talent or Ray himself. Ray responded by having a team of male wrestlers fight Flash and a partner of her choosing, but claims that there is no one in the back that wants to pair up with her. Correction, there is one – Mercedes Martinez! Her music started playing and she got the mic and told Alissa that she had some great matches with her, and it would be her pleasure to team up with her, and face two MEN in a tag match. She also stated that “women are the stronger sex” and whoever Voice picks for them will step in the ring with the best wrestlers in the world.

Fast forwarding to the match, Mercedes and Alissa (sidenote – came out to “My Chick Bad” by Ludacris. lol) wrestled the team of “Mr. Beautiful” Rudy Russo and his partner “Playboy” Andy Dalton. Lots of comedy spots in this match. Dalton struts like Ric Flair and shows his body to the crowd (insert puke). They had a “Sex Off” to see who shows more sex appeal, and obviously Alissa and Mercedes won that battle. Then they had a knip-up battle to see who kips up better. Flash did hers flawlessly, but Dalton stumbled twice, until Russo came in and assist him, but the women haters got double clotheslined by Flash. The girls then struck the boys in the back with chops, which sails them out to the floor, then come charge at them, pump the brakes, and chop them to their backs. The girls tried it again, but Alissa slides out to the floor, which scared the boys back in to the ring, where Mercedes is right behind them, and double chops them to the back, and give them a double clothesline.

The female duo continue their streak by throwing in some nice strikes to both Dalton and Russo, Alissa comes with a fury of strikes, and tags Mercedes in and Martinez throws her lethal knife edge chops to Russo. Their dominant streak was cut off by Dalton and Russo as the men got some offense for a brief period of time, till the laides got momentum back Alissa hot tags Mercedes and pulls off her signature “3 Amigos” on Russo. But the boys got their streak back and beats up Martinez. Russo puts an arm submission on her, but Mecedes manages to fight out, til Dalton, again, interferes. when Mercedes powerbombed Russo from the turnbuckle. But Dalton prevented Martinez to tag Flash and score some offense on the Latina Sensation. The Playboy the stalled and continue to insult Mercedes, until Martinez has the last words with her signature Saito Suplex on Dalton, and gets Alissa Flash in for the hot tag. Flash cleans house on Rudy Russo with a couple of clotheslines, a body slam, and Mecedes comes in to result both women delivering chops to Russo. The girls then whips Russo to the ropes, and both girls performed a double military press on Mr. Beautiful (had him in the air for a good 15-20 seconds) and drops him, which leads Mercedes to hit a necksnap, followed by Flash hitting her patenent Curb Stomp on Russo. Then the girls hit a double suplex on Russo, Flash goes for the cover, but Dalton breaks it up. He then drags Russo to make a make a tag, but met a Samoan Drop from Flash. Alissa then sets Dalton, face down near the turnbuckle, and sets for another Curb Stomp. But wait – Mercedes is on the top ropes and, with Flash holds Dalton in Curb Stomp position, pulls a Low Ki with a top rope double stomp on the Playboy’s top shoulder! This resulted in Flash getting the 1-2-3, and the victory go to the females. This girls then hugged, got their arms raised, Mercedes mocks Dalton’s Ric Flair-esque strut, and the ladies walks away in victory.

Overall, very entertaining match up between the women and the men. Lots of comedy in the match with the women being grossed out by the men’s sexism, Mercedes rolling on the floor (or ring in that case) with the guys’ manly ways, and the Sex-Off was nice. Mercedes and Alissa showed why they are two of professional wrestling’s best, even if it is facing against men. From those breath-taking chops of Martinez and Flash, to the double team Military Press, to that Awesome double team Curb Stomp. People see why these girls aren’t ones people should play around with. Take Flash’s reign as RCW Champion, for example. She had three outings with grown men to get and keep that belt around her waist. As for Mecedes, homegirl can make a chest bleed instantly with her chops (just as Kellie Skater and Mschif).

Sadly, I would’ve love to see Alissa Flash in the main event against two 6-foot 300 pounders, but RCW had to make room for Lance Hoyt (formerly know as Vance Archer in WWE), who replaced Flash from the match, and won the RCW title. But what I got out of Flash in the tag match was very acceptable, and pairing it up with Mercedes Martinez was an mega bonus!

Because of their win, they will recieve an RCW Tag Team Title match against newly crowned champions from a 4-way TLC match Joey Spector (the guy Alissa won the RCW title from) and Nemesis on January 8th.

Great night for RCW last night, and an even greater night next show as Alissa and Mercedes goes for gold!