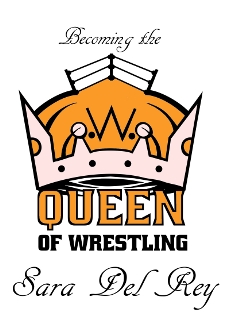 For any indy women’s wrestling fan one of the most difficult questions has to be “What matches/DVD’s should I purchase first in order to become a fan of _____ “. As you quickly scan your brain you inevitably come up with a handful matches, all of which will be on different DVD’s, something which the inquisitor often finds frustrating, especially if they don’t have deep pockets full of cash.

Thankfully, some of the wrestlers do the work for us and create compilations of some of their best matches. One such woman is the “Queen of Wrestling”, Sara Del Rey. Released earlier this year, Del Rey’s compilation “Becoming the Queen of Wrestling” picks up where her previous two compilations, Golden Memories and Death Rey Strikes Back, left off, showing how Del Rey went from top babyface and inaugral SHIMMER Champion (Memories) to dominant heel (Strikes Back) to providing us with a greatest hits of Del Rey’s favorite matches that demonstrate why she is widely considered to be the best women’s wrestler working in the United States today.

Kicking off the DVD is the match which resulted in Del Rey’s heel turn, her SHIMMER Championship match on Volume 18 against MsChif. Expected by many to be just another title defense, this is a very physical back and forth match in which the well respected yet still underdog, MsChif, shocked the world by picking up the win. The surprise is built up nicely by the commentary team of Dave Prazak and Allison Danger whom hype Sara’s strength, dominance and aggression to the point of which even someone who knows the outcome of the match may second guess whether or not they read the results correctly. The submission style of Del Rey is highlighted nicely in this match and provides a first time viewer with a good all around understanding of the in ring skills possessed by Del Rey.

Following the excellent opener, The DVD then provides two hard hitting matches against fellow veterans Hailey Hatred and her opponent in finals of the 2009 ACW Queen of Queens Joshi Tournament, Daizee Haze. The former, which took place at AIW’s Girls’ Night Out 2 event in late 2009, shows Del Rey, at this point well established heel, putting the likeable (even if her ring gear does look like a shopping mall Christmas elf with ribbons) and Japanese trained Hailey Hatred through a brutal high impact match which includes several out of the ring spots, and one Hatred comeback that even left Del Rey taking a VERY hard shot to the mouth three-quarters of the way through. Yet, despite all of this great action, this is actually the inferior of the two matches between the two included on this DVD, which shows how high quality this DVD truly is. Likewise, the latter match against Haze is an excellent and lengthy match that is consistent with other great matches between the two, which, when you take into account the frequency that they wrestle each other, is quite a feat.

Also quite a feat, and a nice addition to the DVD is a match against Alexxis, an up and comer out of New England. While it may be a little easier to put on an excellent wrestling match with an established competitor, Del Rey’s ability to utilize the ring psychology and skills necessary to carry someone relatively unknown to many wrestling fans impresses, and makes her look just as strong in spots as Cheerleader Melissa. However, while the match is certainly enjoyable, and doesn’t take away from the set, I do have to question the choice of including it on the DVD. However, I do recognize that Del Rey may not have received permission to use many of her matches, thus some of her best work may not have been included.

Succeeding the impressive match against the relatively new Alexxis, Del Rey takes on Daffney in a match from Remix Pro late last year. This match will likely be the selling point for many fans who wish to see what Daffney can do when she is unleashed from the limitations she was faced with in TNA. I can fortunately report that the match delivers. While Daffney has never been the ring technician that Del Rey has, her mastery of ring psychology more than makes up for it in an engaging back and forth submission heavy match. A very great addition to an already stacked set.

However, all of these matches are overshadowed by a battle of epic (Although the word is overused. Fierce?) proportions between Del Rey and Hailey Hatred at JAPW Wildcard 6. While these two have already faced off on this DVD compilation, this “street fight” rules match is not only the best match on the DVD, but one of the best women’s matches you will ever see. If you need proof, just know that the match heads outside of the ring, involves chairs and goes into the crowd… within the first five minutes. The backstory, which is laid out nicely by the major promotion worthy commentators, makes one really believe that the animosity felt by Hailey over Sara becoming the first JAPW Women’s Champion is legitimate, and what we end up with is a passionate and engaging hardcore street fight rather than what could have been a series of spots. This is the match on this compilation and well worth the price of the DVD alone.

While the Hailey Hated street fight could very well have been an explosive finale, Del Rey instead finished off the set with three clipped (meaning portions of) matches against Japanese wrestler Bullfight Sora, Amazing Kong (Kharma) and Nattie Neidhart (Natalya). While these matches provide a lot of interest for fans of mainstream women’s wrestling, being clipped and the fact that Del Rey was not as seasoned as she is today causes me to prefer turning off the DVD after the Hatred match. These matches aren’t bad by any means, I just prefer to look at them as special features, rather than a main event/final match (although you get to see Kong/Kharma speaking Japanese in an interview segment, which is quite fascinating).

As one could gather from this review, Sara Del Rey’s “Becoming the Queen of Wrestling” is a highly recommended compilation DVD that provides somebody new to independent women’s wrestling an insight to the individual widely considered to be the best. Del Rey developed a diverse and well planned set full of matches against veterans and up and comers alike, and even the low points of the DVD (the match against Alexxis, the clipped Japanese matches) aren’t low points when you compare them to matches on DVDs put out by major companies. If you have a little extra spending money and wish to expand your horizons and #youwantwrestling (har har), definitely pick this set up.

You can purchase “Becoming the Queen of Wrestling” here.