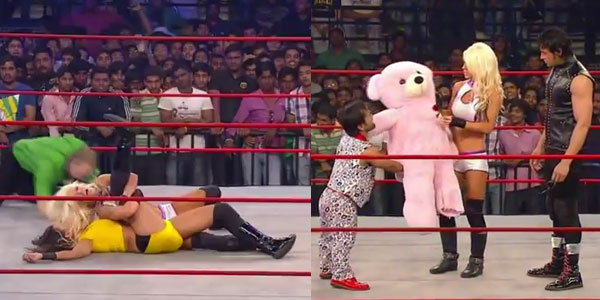 Hola all my loyal Ring Ka King-ians, and welcome to another edition of the weekly recap for India’s top wrestling promotion. Last week we saw the debut of TNA Knockout, Angelina Love, as she seemed to both enter a feud with Raisha Saeed, AND find some romance with one of her tag team partners. This week, Angelina makes her first in-ring appearance for the company, and does so by taking on a tough opponent in the Future Legend, Alyssa Flash! Let’s see how this plays out…

We head to the ring with both Jeremy Borash and the female announcer whose name escapes me at this time. Nonetheless, they introduce Alyssa Flash, and out she walks looking insanely amazing in some bright yellow gear. Flash shoos the fans away from her, as the crowd erupts in glee for the pink and silver titantron of one, Angelina Love! She walks out from the back in some sch-nazzy new gear, as she poses on the ring apron before climbing inside and ascending to the second turnbuckle for her rabid fanbase. The bell then sounds as we kick things off with a lock up.

Flash with the wrist lock early on until Love reverses into one of her own. A waist lock exchange continues until Angelina hits a side headlock takeover. Flash uses her leg strength to lock in a choke until Love fights out and reverts back to the headlock. Alyssa fights out and sends Angelina off the ropes, as the blond bombshell comes back with a shoulder tackle. She then runs off the opposing side, as Alyssa kneels down in attempts to trip her up…only Angelina actually does a neat cartwheel to avoid it, before scording with a shoulder tackle. She then follows it up with a hip toss and a spinning wheel kick for a two count!

Flash backs her into a corner and tries for a choke until the referee gets in the middle to break it up. This allows Alyssa to poke Love in the eyes and take the advantage with some kicks. She charges for a splash, but Angelina slides onto the top rope and rolls Alyssa up for a near fall. Before the momentum can shift into her favor though, Angelina is taken down with a huge boot by Flash. Some kicks follow up, before Alyssa goes for a bodyslam that Angelina escapes out the back for. She spins Flash around and begins going to town on her with an assortment of punches, following with a running move that is countered into a huge Samoan Drop.

Alyssa applies a sleeper hold, messing with Love’s hair in the midst of it to try and throw her off her game. The crowd gets behind Angelina, as she attempts to fight out and eventually does with a running clothesline! A back elbow continues on, as Flash is sent into the corner. Angelina then runs off the ropes with a sick facebuster, but only gets a two count…womp womp. Love signals that the end is near, but Alyssa disagrees as she hoists Angelina up and goes for the Emerald Fusion! Love manages to elbow her way out of it though, before DRILLING Alyssa with the Lights Out for the victory in a pretty darn amazing match between the two.

Thoughts: Let’s start off with the match, which I thought was honestly the best womens match Ring Ka King has put on, and one of the best TV ones I’ve seen in a while. Alyssa and Angelina meshed extremely well together to the point where everything was hit to perfection and there weren’t even any slow moments. If Angelina does this with Alyssa, I’m dying to see how she fares against Raisha (my personal favorite of the personas), because that could be one amazing match.

Now…First of all, Ring Ka King just won my wrestling love with this utterly tremendous after match segment. I have no words to describe what I witnessed, and that’s exactly what I love about wrestling. This honestly rivals NXT in terms of how amazed I am at it, and Indian Hornswoggle who buys oversized bears and shakes his wee chest in the ring is perhaps my new hero in life. I had no idea this was happening when I started writing the recap, which will explain why I’m on such a high from it right now…but honestly, that was so randomly amazing that I want more, and I had better get it Ring Ka King! Oh, and I’m officially announcing myself as Team Indian Hornswoggle in the love triangle debate. Don’t let me down Angelina…