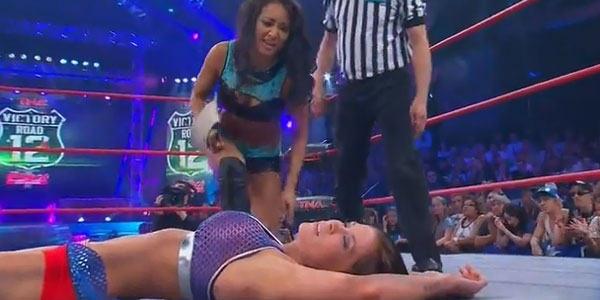 What’s up all you loyal Impact Wrestling fans? It is I, Bobby, your host with the most, and I’m here to bring you all the latest happenings with the Knockouts of TNA. Lastnight , the feud that has been brewing between Gail Kim and Madison Rayne finally imploded as the two took to the ring over Gail’s prestigious Knockouts Championship. Relive the spills, thrills, and chills from this star studded match, as well as some segments involving my TNA hero, Dixie Carter, below!

We head to a video package to promote Gail and Madison’s upcoming title match. The video highlights Madison’s self proclaimed rise to glory when she “won” the battle royal to claim top contendership for her best friend’s title. We proceed to some moments of Impact history I wish to overlook, before heading to a match graphic and running down the tale of the tape! From there, and of course following a Taz pleasing shot of Christy Hemme, our KILLLLERRRRR QUEEEENNNNNN walks out in some new gear, waving to her glorified fans at ringside. She climbs into the ring as Taz decides to cheat on his Hemme infatuation by discussing Madison’s mesh material. Someone won’t be happy about that.

Following that bit of knowledge, the STILL addicting theme song of Gail Kim plays as she steps out in black and blue gear. Taz goes at it again by talking about Gail Kim’s latex. He just can’t make up his mind, can he? Nonetheless, Kim executes her ring apron pose and then enters the squared circle to taunt some more. Gail and Madison hug each other, but Rayne then decides to bend down and tie her boot. It looks as if Gail is about to hit Madison with the belt, but she stops herself and the bell sounds.

They lock up, as both ladies go for the hair and creepy Earl Hebner gets in the middle of it to separate them. The two seem to argue a bit, until Gail takes control with some kicks to the stomach. She then forms the heart signal that Madison is oh so familiar with, before planting our Killer Queen with a running drop toe hold. Gail runs off the ropes with a huge clothesline, but only musters up a two count. Madison sends the Champ into the corner, but Gail slides in between the ropes and lands on the ring apron. Rayne takes it upon herself to shove her skull into Gail’s stomach and then spear her off the ring apron into the steel barricade. Amazing!

Gail is down on the outside, as Madison taunts her “buddy” to get up. Madison continues to prove why I like her so much with these hilarious shrieky insults, before covering for a near fall and then going for her leg thrust head smash type maneuver. Before she can blast Kim’s skull along the canvas though, Gail reverses it into a roll up but Madison kicks out as soon as possible. Rayne continues to take control with a large clothesline, then proceeding to drag the Champ into the corner and choke her with a boot to the throat. Madison runs forward, but Gail with some boots to the jaw. Kim moves ahead, and Madison hits a SICK calf kick.

The crowd seems split between the two women, with Madison busting out a Northern Lights Suplex for a near fall. Rayne continues her beatdown with a choke hold, before going for a running facebuster. Gail simply shoves her off, before hitting a dropping leg type move to send Madison down. Madison clutches her knee, as the two trade shots until Gail takes the advantage with a series of clotheslines. Kim with an elbow to the jaw, following it up with a diving reverse crossbody for a two count. Madison is sent into the corner, as Gail follows with the shoulder tackle through the ropes move and connects with a missile dropkick. Gail covers, but Rayne kicks out at two!

Kim signals for Madison to get up, as she goes for the Eat Defeat to no avail. Madison attempts a roll up, but Gail reverses for a two count as Rayne then reverses it again for a two of her own. Rayne hits a jawbreaker to the knee, followed with a lighting fast neckbreaker, but only attains a two count. Creepy Earl Hebner feels up Madison’s shoulder as she simply questioned his count, which sparks Gail to score with a European uppercut. She goes for the Happy Ending neckbreaker, but Rayne breaks it up and sends her straight down before teasing, “WE’RE NOT FRIENDS ANYMORE GAIL.”

The crowd gets behind Gail, who simply falls victim to a running dropkick by Madison. Our resilient champion kicks out, as Taz mistakes @MickieManiac for @MickieMannequin and even I can’t contain my laughter… Well played, Taz, well played. Madison goes for the Rayne Drop, but Gail quickly escapes and signals for the Eat Defeat! She loads up, but Madison shoves her back and continues this beatdown. Rayne Drop attempt again, but Gail reverses once more and this time hits the Eat Defeat to send Madison down and out for the count. Gail retains her title in a pretty awesome showing from both ladies.

Thoughts: Honestly, I really liked this match. Madison showed so many new moves that I’ve never really seen her hit before, and they all came off well. There were a few small spots that seemed to be a little miscommunication, but overall, the two put on a great match and had some fun storytelling involved as well. It seemed like Gail played the face in terms of the match, as Madison controlled for nearly all of it until Kim was able to make her comeback at the end and attain the win out of nowhere. I don’t know where we go from here, but I hope that some new blood gets a shot. Gail’s got a lengthy reign under her belt, and by Knockouts Title standards, she’s held it for an eternity compared to the fates people like Winter and Velvet Sky experienced. I don’t have a problem with her as champion because it’s finally building prestige to the title again, but I’m interested to see just where we go from here.

…AND just because I can (and because I legitimately overly admire her), I will also include a few segments from TNA President and one of my Wrestling Gods, Miss Dixie Carter! Ahem…

We head backstage to see Jeremy Borash standing by with DIXIE! Looking as elegant and stunning as always, she announces that this June marks TNA’s 10th anniversary, so they will have Slammiversary take place in Miss Dixie’s hometown of Dallas — a place they have never been before. She claims there will also be a few special announcements coming up. Then Jeremy Borash transitions into the main event between Sting and Bobby Roode. Dixie states that she trusts Sting, and if he wants to put himself as an active wrestler then she will be ringside to support him. Dixie reiterates the horrendous things that fool did to her in sheer disrespect, as Dixie claims she hopes this all ends tonight. Borash then closes the interview segment as I say goodbye to Dixie for the time being.

Following Bobby Roode’s victory over Sting, he heads outside the ring and BAH GAWD, HE GRABS A CHAIR! He then turns his attention to Dixie and lifts her into the ring. I begin to sob in fear of what may happen to my fearless TNA leader, as she crawls for her life and he forces her to stare at Sting’s lifeless self. This FOOL refers to Dixie as a female dog, as I begin packing my bags because I’m heading to the Impact Zone tomorrow to confront him for doing such a thing to Miss Dixie. Dixie moves the chair out of the way so she can back up as far as possible, but Sting comes to Dixie’s rescue. Thank God! Dixie tries to warn Sting, but Roode attacks him with a chair from behind as Dixie screams my name that I’m ashamed to share with this creature. He backs Miss Dixie into the corner and then sets his sights on Sting.

He duct tapes Sting to the ring rope while Queen Dixie tries to fight him off. Roode proceeds to climb over her and she then beats on his legs like the hero she is. Ultimately, he grabs her by the hair and lets that mouth run again. Dixie then does the human thing and uses herself as a shield to protect Sting, which sparks Roode to then smear Sting’s paint on her face. Queen Dixie tries to help Sting by removing the tape, as the PPV comes to a close to chants that aim to get me fired… I mean aim to get him fired.