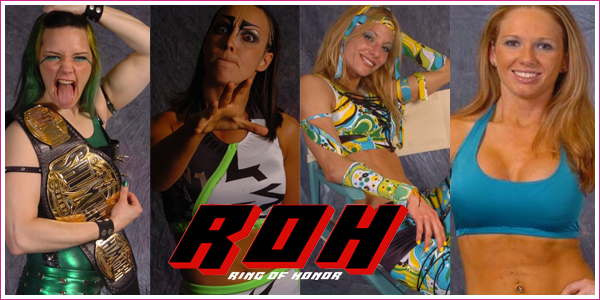 After weeks and weeks of waiting, SHIMMER fans are finally treated to some SHIMMER-lite goodness on HDNet. This week the team of Neveah and Daizee Haze take on former SHIMMER Champion Sara Del Rey and current SHIMMER Champion MsChif. Check out the match below:

The heels enter first to a cheap plug for SDR’s new Twitter page followed by Neveah and Daizee. Will someone please get Neveah some new ring gear!!! She seems to be wearing that same outfit everytimeÂ I see her. Anyway, ontoÂ the match.

NeveahÂ and MsChif start things off with a lockup. Neveah with a slam from behind into a hammerlock into a really pretty bridge. After an questionable armdrag,Â  Neveah tags in DaizeeÂ and executes a double hip toss for a near fall. Daizee goes for an arm wringer but MsChif reverses with an impressive frontflip. Sidenote:Â  I think it amazing that a woman of MsChif’s body type can pull off such graceful maneuvers. Not that she’s fat or anything, but she doesn’t strike me as the type to be so agile and flexible.

Daizee counters with a reversal of her own into a couple of armdrags. Daizee tags in her partner who hit her trademark necksnap/sliding clothesline combo. She goes for the pin, but it’ s broken up by Del Rey. Neveah goes back on the attack with a scoopslam, but her momentum is halted by Del Rey once again. MsChif takes advantage and hits a perfect standing moonsault for a two.

Sara is back in the match and takes it to Neveah with aÂ headbutt and several stomps. After one last stomp to the face (ouch), Del Rey gets Neveah back to her feet and whips her to the corner. Nevaeh attempts aÂ bottom rope crossbody (…really Neveah?), only to be planted by Del Rey’s modified suplex.

Quick tags by the heels, working over Neveah, who needs a tag desperately. After a reversal, Neveah finally manages to get to her corner and tag in Daizee, who lights a fire under this match. After a Gail Kim-esque drop kick, Daizee hits a flurry but only gets a two count. After a failed monkey flip, Neveah blind tags Daizee. Here’s where things get really cool.

Oblivious to the tag, Sara sets up Daizee for a powerbomb while MsChif goes to the top rope. Daizee counters with a hurricanrana, simultaneously avoiding MsChif Green Mist. Very nice spot, ladies.

Neveah uses the confusion to her advantage, rolling Sara Del Rel up for the near fall. Del Rey gets control of the match with a headbutt into one of the most impressive finishers in women’s wrestling today: The Royal Butterfly.

All four women involved in this match put on a great show, as always. I do, however, have one complaint. I feel like I’ve seen this match before. In fact, I did. A few weeks back we saw the same match, with Sassy Stephie taking MsChif’s place. I can’t help but feel like ROH is overusing these four women. There are plenty of girls on the SHIMMER roster that could put on awesome matches. Why not put some of them in ROH? Rumor is that a certain ‘Hardcore Knockout’ will be making her debut in Ring of Honor soon, so maybe we’ll have a new matchup on HDNet soon.

Another thing that could be injected into ROH’s women’s division is some storyline development. I realise that these girls have storylines in SHIMMER, but I don’t think a little storytelling would go amiss.

So what did you guys think? Vote and comment below.