Sandra Gray Talks Being a Wrestling Seamstress, How She Got into the Business 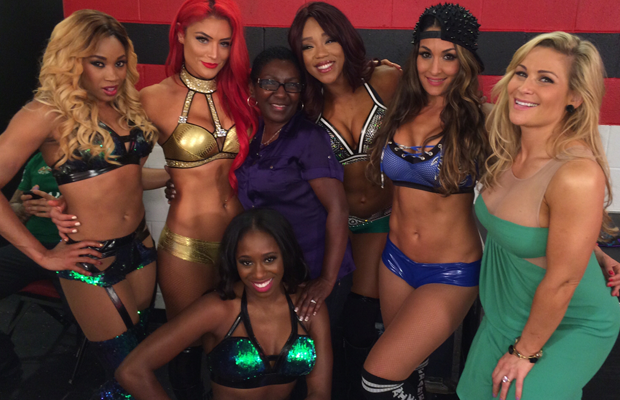 VICE recently spoke to veteran WWE seamstress and Total Divas scene stealer Sandra Gray about the unconventional way she got into wrestling, the process of creating ring gear and the atmosphere behind the scenes.

In the article, Sandra tells the story of being approached by Sable in a fabric store in 1994. Sable was looking for someone to make ring gear for her boyfriend Marc Mero, or as he was known at the time, Johnny B. Badd. She knew nothing about wrestling, she says, but her family was very familiar with it:

“They knew all about who [Johnny B. Badd] was. They were super excited. So I took on this job, never having sewn on spandex before, and I made him a pair of trunks. I didn’t know the technique, and I didn’t have anyone to ask. I just did the best I could, and I was going to get the chance to see my work on TV. My whole family was excited.”

Mero, she says, called her to thank her for the gear, and soon was spreading good word of mouth around the locker room:

“That just meant so much to me that he took the time to [call]. He did and that’s how I got my start in professional wrestling. I must have done a good job because he started telling people where he got his trunks from, and people started to call me. I basically just taught myself.”

She described the WWE as being like a family, calling was they produce a “beautiful product”:

“It’s like a family. I look at us like gypsies. We all come together and then we roll into this city and put this huge show together. Then it’s over and we move on to the next city. But we love what we do, and it takes so many people to make this thing work. It’s a beautiful product.”

Sandra also explains the process behind creating ring gear, saying that wrestlers give her an idea of what they want, and she’ll create an embellished version of what they describe:

“The costumes really take a beating, so there’s just a certain technique for stitching on spandex. It has to be tight-fitting to the body; they have to feel it. If I see them in the ring and they pull on their outfit or tug at it, then I haven’t done my job because something’s not fitting right.”

You can read the full article on VICE.com.