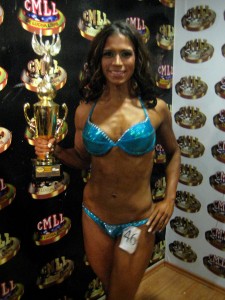 Former TNA Knockouts Tag Team Champion Sarita suffered an injury earlier this week when she fell to a hard floor during a match in Mexico’s CMLL promotion.

Sarita, who competes as “Dark Angel” Sarah Stock in CMLL, slipped on the top rope as she went for a dive to the outside, falling to the floor below. The Knockout was taken out on a stretcher and hospitalized.

Following the incident, Sarita updated fans via her Facebook page in Spanish noting that she was sore from the fall but is okay.

The next day, she took part in CMLL’s annual bodybuilding competition and won for the sixth year in a row (see left). She wrote: “Thank you to everyone who came out to support me at the contest to help me get the win!”