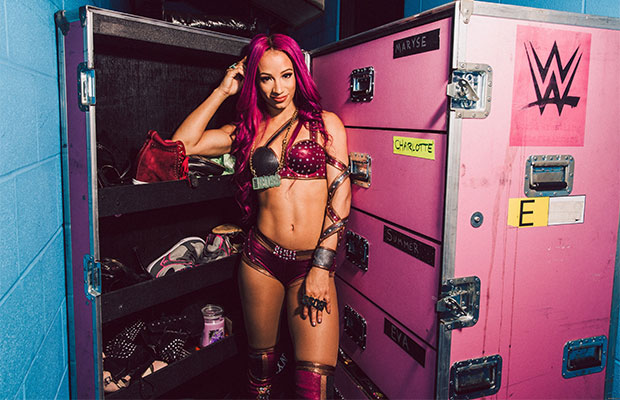 Sasha Banks may be sitting out to deal with an injury, but The Boss has remained busy by promoting the WWE! In an interview with Sports Illustrated, the former Women’s champion sat down to discuss her dreams, Eddie Guerrero and more. Here are the highlights:

On holding the Women’s championship for 27 days: “I’ve only been in WWE for three years, and this is only my first year on the main roster. But I’ve made noise from NXT Takeover last year to SummerSlam this year. Patience is key. You can’t get selfish, and that’s the number one thing I’ve learned at WWE. The world continues to go round, and I just knew–given the right opportunity and the right moment–that the world would know I was good, but now the world knows that I’m great.”

On why she got into wrestling: “Eddie Guerrero is my number one. He is the reason I am in the WWE – I wanted to be the female version of him. People are talking about women’s wrestling, and that’s all I’ve ever wanted since I was ten years old. I wanted people to talk about the women and all they could do. We’re celebrating women’s wrestling. People want to see us, and we’re just doing our best.”

On learning to wrestle: “Once I moved to Boston, that’s where everything came full circle for me. I joined a wrestling school, and it was the same wrestling school I remember emailing when I was twelve and they told me I was too young. Then, there I was at 18, walking through the doors to this fantasy camp and I was the only girl. I walked in and thought, ‘I got this,’ and I got it. They gave me three months of free training, and they helped a little Mercedes KV turn into ‘The Boss’ Sasha Banks. That’s why I love Boston so much, it’s home. I got the phone call for my tryout in Boston. Boston is home, I love it.”

On what she does after RAW: “After a pay per view, I know there is TV the next day. But after RAW, I like to eat bad. I can have some pizza, French fries, a burger, live it up, a glass of wine–red, of course.”

On her current wrestling dreams: “I’ve accomplished so many of my dreams already, but main-eventing WrestleMania is a dream. Also, I want to be on the cover of the 2K game next year – bye bye, Brock (Lesnar). The sky is the limit, and there is no limit to my dreams.”

Do you think Sasha will win the championship again? What do you think of her post-RAW treats? Let us know your views in the comments below!