Sasha Banks vs. Charlotte in an Iron Man match announced for Roadblock 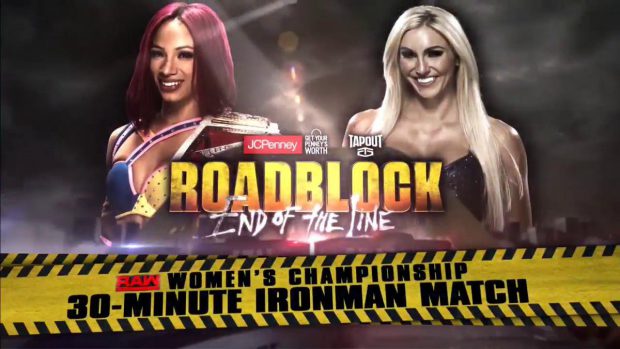 One week after their Falls Count Anywhere main event match, Sasha Banks and Charlotte will meet again at WWE’s Roadblock: End of the Line, this time competing in a 30-minute Iron Man match!

Earlier in the evening, Sasha was interviewed about how it felt to win back the Raw Women’s title from Charlotte in “Flair Country”.

Acknowledging that Charlotte is set for a title rematch and their earlier battles involving Charlotte’s father Ric Flair, Sasha says she wants to make history yet again by challenging Charlotte to an Iron Man match – which Charlotte accepted.

During Raw’s final segment, Charlotte offered her father a public apology, which dates back to when she dismissed her father on a May episode of RAW. Charlotte said she was ashamed of her actions from six months ago but said the only thing harder than losing her title was seeing Ric congratulate and raise Sasha’s arm high.

A hug for Dad? NO!!
"You SON OF A B**CH!" – @MsCharlotteWWE to @RicFlairNatrBoy pic.twitter.com/zREVs8bL1Y

She would ask her father to join her in the ring, give her apology and the father/daughter looked as though they could patch things up… until Charlotte slapped Ric across the face for for his “betrayal”.

.@SashaBanksWWE rushes to the ring to defend @RicFlairNatrBoy, but gets thrown into the barricade for her trouble! @MsCharlotteWWE #RAW pic.twitter.com/qmasv6dpnn

The dirty deed would cause Sasha to come out, leading to beatdown that ended with Charlotte throwing Sasha to the barricade as well as being tossed face first to a ring post.

This marks the first time in two women have competed in this stipulation under the WWE main roster umbrella. Sasha Banks previously competed in NXT’s first women’s Iron Man match against Bayley at NXT TakeOver: RESPECT.