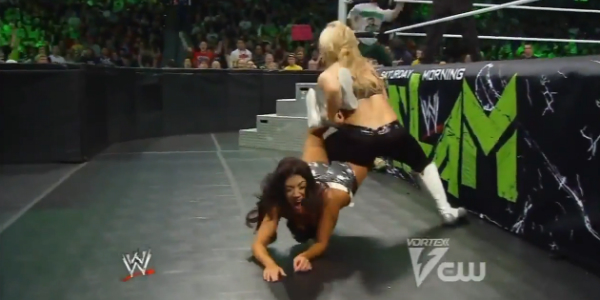 Good day everyone, and welcome to this weeks recap of all things pertaining to that show Diva fans probably aren’t too familiar with, Saturday Morning Slam. Personally, I’ve caught two full episodes before and it seemed pretty entertaining albeit the younger demographic they target, but that’s beside the point. The actual focus of why I’m writing all of this is that we’ve got ourselves a good old fashioned six person mixed tag team match to cover! Last week if you’ll recall, Natalya spoke to Primo, Epico and their sensuous valet, Rosa Mendes for reasons that I choose to believe are because I/we always welcome having more Natalya, Rosa, Primo, and Epico in my/our TV viewing life. The interview set up tonight’s festivities which pit the feisty trio against Natalya and her counterparts, The Great Khali… and Hornswoggle.

I’ve kind of grown to not dislike Hornswoggle as much as some of my other celebrity-ish feuds that build inside my own head with the other person involved having zero idea I even exist ever since I saw a tweet which had a quote from him on a radio show where he stated that he feels the Divas work even harder than the males at times, so we’re on an okay page right now. However, we’ll have to see if I still feel the same way should he choose to in any way harm or taunt Rosa Mendes in what seems like a never ending feud between them dating back to when he sprayed her with circus flowers on one random episode of Raw.

I have to admit that this theme music has grown on me A LOT and I may even love it more than their original as a trio… may being the key word as I’m still undecided but I’ll be sure to let you know since I’m sure that’s what’s on everyone’s mind who reads this. The fiery trio walk out, as I stand in awe and shock that Rosa was able to wear something this scantily clad on the WWE’s most child oriented show… not that I’m complaining. Wade Barrett is on commentary, but my focus is strictly on the five star dances taking place by Rosa in the ring. We get a recap of last weeks interview as I now grow a little sad that their theme song has been replaced by Khali’s.

…oh wow. It literally took me a good few seconds to find Hornswoggle as for a minute there I thought he vanished. Natalya and her duo dance down the ramp (okay Khali dances about as well as I do so that probably doesn’t count). Wade dubs Natalya the normal member of the group which completely makes sense, as it looks like she and Rosa will begin. A kiss is exchanged by Nattie and Khali, which none too impresses Rosa. The two lock up and Rosa backs Nattie into the ropes until she’s forced to break the hold. She hits what I’m guessing is a knee but can’t be certain due to the random camera switch to the Great Khali’s face of all things, before locking the wrist until Natalya is able to attempt flipping out.

Rosa takes her back down and hits a suplex for a two count, as we keep getting camera shots of Khali’s face. WHY? Rosa misses a splash in the corner and gets rolled up for a two count, as she’s then taken down by a clothesline. An Irish whip is exchanged and ends with Natalya kicking Rosa in the face and signaling for the sharpshooter… but my focus goes to commentary as Wade Barrett seems to be dogging our Mendes. (We poor Rosa fans don’t ask or get much, so this is like kicking a dog when it’s down Wade. You’re better than this…) Rosa manages to slide over and tag in to Primo. In comes Hornswoggle and I already want to sob, but to make matters better or worse depending on your preference, Khali makes the tag and startles Primo.

Primo tries to tag in Epico, but Epico hilariously tries to no sell it and hops off the apron. Rosa just decides to shake around the ring apron like a good Mendes should, and as we return from a commercial, we see Epico duck a kick and hit a leg DDT to take control. Natalya looks on concerned, and in comes Primo with a nice back splash as he continues to target the leg and Rosa continues to shake and dance. Epico with the tag and a legdrop for a two count, with the crowd now getting behind Khali. Epico drops a few knees and heads to the second rope, but as he leaps off he eats a boot. Primo tags in now and misses an elbow, but Rosa is now on the apron… I repeat, Rosa.. is on… the apron. Hornswoggle goes after her boot and she chases him around the ring until Natalya leaps over him and locks Rosa in the sharpshooter which is almost spot on identical to what happened on SmackDown and now makes us Mendes fans feel even worse that Rosa didn’t learn what would happen the first time. Rosa begins to tap out, but she’s not legal so it doesn’t count. Back inside the ring, Khali takes Primo out and we get these horrendous random camera shots on commentary which tell us what’s happening instead of showing us. After something we will never know, Khali hits a chokebomb on Primo for the victory as the trio dance and Rosa screams in a Spanglish fury.

Thoughts: Hmm, well I’ll comment on the Divas since that’s what you all probably focus on when reading this website. I wasn’t crazy about Rosa and Natalya’s chemistry this week, but I did like it better on the SmackDown tag which I guess makes sense since this was taped before that one despite the air date reversal. The ending was pretty much identical to SmackDown as well, but I liked the sharpshooter more than the clothesline so I kind of wish that would’ve happened on the blue brand and vice versa with the clothesline here. One thing I love about Rosa, Primo and Epico though is that they aren’t afraid to act comical in their matches against Khali, Hornswoggle, and Nattie. A lot of heels are your standard angry 24/7 scream/fear me type, but these three play into the whole “Hornswoggle’s short/Khali’s Tall” thing, most notably when Primo was all ready to go at Hornswoggle and then scared as hell to face Khali. For the most part, this was pretty much what I expected it to be, but I like that Nattie and Rosa don’t get shafted in these tags and relegated to a simple catfight. They get to take part in about 1/3 of the action like everyone else and it comes off much better than some other intergender bouts we’ve seen in the past.