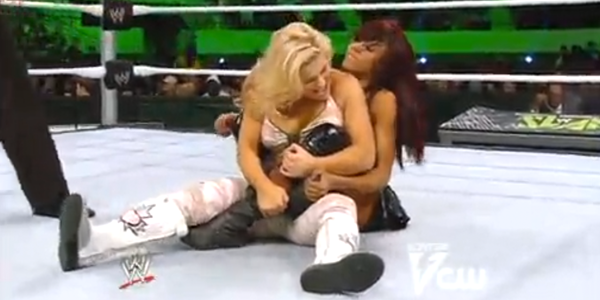 What’s up Diva fans and welcome to the inaugural edition of the Saturday Morning Slam Redux. I’m Jack and whether you’re having a fried breakfast, cereal, pancakes or tea and toast, I have the perfect thing to compliment it, a glass of the juiciest chemistry going within the Divas division. Of course, I’m talking about Alicia Fox vs. Natalya. We know how well these two mesh together and we’ve seen some marvelous matches from them in the past, so will this just be another one to add to the long list? Let’s find out!

We kick off the proceedings with an unknown over-the-top announcer talking about the Divas match over some really cool looking graphics and then we head to the ring. It may be too early to P-P-PARTY but that isn’t stopping Alicia Fox, who is strutting her way to the ring. Whilst I continue to be amazed with the fact Alicia doesn’t injure herself on her entrance with all that hyperactive hip thrusting, my attention is drawn to the commentary booth. Josh Mathews is sitting alongside Booker T! My ears have been deprived of Booker’s insane commentary for too long but the main concern is, will he enjoy the duo he dubbed “Salt and Cracked Black Pepper” facing off? OH MY GOODNESS, SHUCKY DUCKY! Next, it appears Natalya has been given the new nickname “Calgary, Alberta, Canada” as Tony Chimel forgets to say the word ‘from’ but that mistake from him isn’t going to make Nattie’s entrance any less great – she is looking pretty in pink as always!

The bell sounds and the girls tag hands as a show of respect before Natalya applies a waistlock and goes for a schoolgirl pinfall. Alicia gets up almost instantly and stares down Nattie before the Dungeon Diva applies a headlock. Alicia twists her way out of it and hits a headlock takeover. Tal wraps her legs around Foxy’s head to break the hold and Alicia nips up. Booker references his wife Sharmell *bows to the Queen* and Natalya executes a headlock takeover of her own. Alicia mirrors Nat’s movements from a few seconds before and wraps her legs around Natalya’s head, leaving Ms Neidhart no choice but to one-up A.Fox and perform an even better nip-up, which is followed by a headstand frontflip – lovely chain wrestling!

The skills continue and the girls work over one another’s wrists, both reversing the manoeuvres with flips and rolls. Nattie armdrags Alicia into the turnbuckle and goes for a monkey flip but the Foxy Floridian lands on her feet! The Florida native then goes for a dropkick but Natalya swats Alicia away like a fly. Natalya looks to go for the Sharpshooter but her foe makes it to the ropes. The girlfriend of The Great Khali then charges at Alicia, but Fox leapfrogs out of harms way and executes a stunning backward roll headscissor takeover!

A shot to the commentary means we miss the next move but Alicia is the one in control and manages to get a two count. Alicia then whips one of her lethal weapons out of it’s sheath and Natalya falls victim to a northern lights suplex. William Regal will no doubt be marking out at Alicia’s beautiful bridge as Foxy gets a two count with it before slowing the pace with a bodyscissors. Natalya shows her strength and goes to slam her opponent but Foxy uses her momentum to push Tal back down in a crossbody fashion. Alicia doesn’t pick up the win after that move so she once again applies a bodyscissors. Natalya ‘ain’t got no time for that’ and once again stands up and hoists Alicia skyward. Alicia wriggles down the back of Natalya and tries to get a pin but Nattie rolls through and grabs Alicia’s legs. Ms Fox is wriggling as best she can to avoid the Sharpshooter but it’s to no avail and Natalya locks in the submission and gets the win.

To see more of Natalya, skip 20:36 in the video to see the ‘Iron Woman of Saturday Morning Slam’ interview The Miz backstage.

Thoughts: The first Divas bout on Saturday Morning Slam was definitely a success! I believe this was the first time that Alicia and Natalya have faced off as face vs face and for me, it was just as entertaining as when they hate one another. The constant reversals at the start of the match were fantastic and I loved the athleticism that Alicia showed during the contest. Her monkey flip reversal and northern lights suplex were both excellent. This match was shown how underrated both of these two are and as always, it was a pleasure to see them compete against each other. Nattie is also a pretty cool backstage announcer, great to see yet another way that she can show off her character! And with that, stay tuned. Jack will be back!