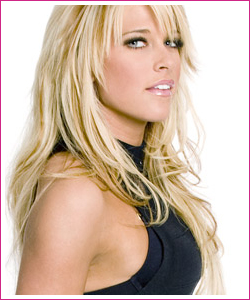 I thought it was a little strange Monday night, to see Kelly Kelly job out to Beth Phoenix given her growing momentum on Raw in the last six months. And today emerges a very serious rumour that could mean big trouble for WWE. Rumour has it that WWE is depushing Kelly for refusing to pose for Playboy.

The implications of this rumour are incredibly severe because if true, it would be classified as sexual harassment. I would certainly hope that Kelly is wise enough to stand up for herself and not just take it as par for the course in the wrestling industry. No one deserves to be treated like that and to say I’m pissed off would be an understatement.

It seems WWE just doesn’t learn and even though they continue to come against the law, they somehow manage to scrape away. It was 10 years ago that Sable sued the company for sexual harassment as she was punished for refusing to pose topless.

If this is true, this is just despicable. It’s funny how yesterday the world celebrated a new era of hope and equality and the next day, this comes out. Please Kelly, I urge you, find yourself a lawyer.