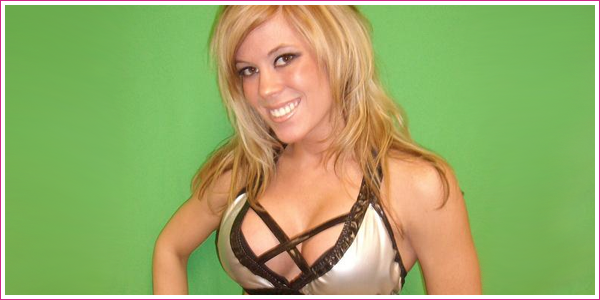 As a frequent visitor of this site I noticed something that I found strange. A lot of you guys are not familiar with SHIMMER. For shame people. SHIMMER is the cream of the crop of women’s wrestling. Anyhoo, now that I’m an intern here at Diva Dirt, I have the chance to help you see the error of your ways(Lol, just kidding). Without further ado, I present you with what I hope to be a new staple of this site, SHIMMER Spotlight.Â
Â
Name: Ashley LaneÂ
Age: 22Â
Aliases: Lexi Lane, Madison Rayne, ‘Sexi Lexi’Â
Entrance Theme: “Curse of Curves” by Cute Is What We Aim For / “Misery Business” by Paramore
Finisher: Dys-Lexi-aÂ (Reverse STO) / Curse of Curves (with Nevaeh) (STO by Nevaeh & Yakusa Kick by Ashley)
Accomplishments: 2 time Ohio Championship Wrestling Women’s ChampionÂ ; 1 time Shimmer Tag Team Champion (with Nevaeh) – first
Â
At first glance Ashley Lane may look like just another Diva Search Reject, but think again. This pint-sized dynamo is half of the SHIMMER tag champs and one of the best female wrestlers on the indy circuit today.Â
Â
Ashley has spent the last few years honing her craft on the circuit against accomplished wrestlers such as ODB. All her hard work paid off, as she managed to score a spot in SHIMMER, and eventually earn the tag team titles with her partner Nevaeh.Â
Â
If Ashley looks familiar to you its probably because she recently had her first televised match. A few weeks back she competed on Impact as Madison Rayne and was completely and utterly demolished (poor girl) by Awesome Kong.Â
Â
Simply because she has the ‘right’ look, I think she may be picked up by WWE or TNA. That being said, if she would like to actually wrestle she better sign with TNA. I think she would be a welcome addition to TNA’s babyface roster, as long as she doesn’t become all stale and boring, like Taylor Wilde. She would even be a good fit for WWE, even though they wouldn’t use her to her full potential.Â
Â
What do guys think? Ashley Lane for WWE? TNA? Keep her ass in SHIMMER? Here are some videos to help you decide. Sound off in the comments.Â