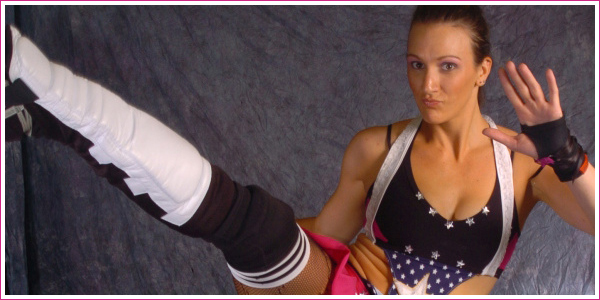 You know what time it is people! Really? You don’t? Well I’ll clue you in. It’s time for another dose of SHIMMER goodness. SHIMMER Spotlight is back, bringing you profiles on the hard hitting ladies of SHIMMER. Everyone from the major players like MsChif to the up and coming rookies like Ashley Lane and Portia Perez. This week’s Spotlight is on Australian wrestler and SHIMMER up and comer, Madison Eagles:

If you ask anyone who has been keeping up with SHIMMER lately who’s the one to watch, you’ll most likely hear this name: Madison Eagles, and for good reason.

Hailing from Sydney, Australia, this beauty from down under stands at 6′ 1″ and boasts quite an impressive move set. Madison made a name for herself in her home promotion, PWA, against the likes of Penni Lane, Sway and fellow SHIMMER rookie Kellie Skater in singles competition. A former dancer, Madison’s is known for her flexibility as well as her hard-hitting style. While Madison has never held a singles title, she has seen success as a tag team with former PWWA Women’s Champion, Jessie McKay, collectively known as ‘The Pink Ladies’.

In October 2008, The Pink Ladies caught the attention of SHIMMER, who booked them in a six team gauntlet match  on Volume 21 to determine the first ever SHIMMER Tag Team Champions. While they were the first team eliminated, The Pink Ladies made an great impression in their U.S. debut. Volume 22 saw Madison and Jessie take on SHIMMER originals and all-around veterans, The Experience (Malia Hosaka and Lexie Fyfe). Once again, Eagles picked up a loss, but got a standing ovation from the SHIMMER audience who chanted, “Please come back” as the team exited the ring.

Eagles granted the fans’ wishes at the May 2009 tapings in her first ever SHIMMER singles match against Sara Del Rey on Volume 23. On Volume 24, Madison flew solo again, this time against Mercedes Martinez, another SHIMMER original. After the match, Martinez stated that Eagles was one to watch for as a potential SHIMMER Champion in the future. Coming from someone as accomplished as Mercedes Martinez, that is quite the compliment.

From what I’ve seen of Ms. Eagles, I have to agree with the general consensus. Madison is not only the standout star of  The Pink Ladies, but in women’s wrestling overall. Her ring work is extremely impressive, but that’s to be expected of a 8 year veteran. To be honest, I don’t believe Madison has even reached her peak. I can see her moving up the ranks in future volumes a la Serena Deeb, or even netting the coveted SHIMMER Tag Titles.

As per usual, here’s a video to get you familiar with this rising star. To see more of Madison, pick up a few volumes of SHIMMER at rohwrestling.com. Enjoy!