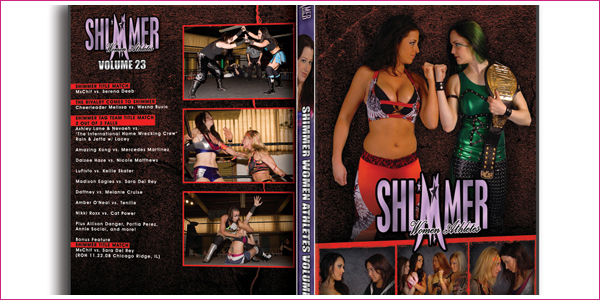 Listen up all you SHIMMER Fans! The latest installment from the all girl promotion will be available this month. Notable appearances include SHIMMER mainstays: Sara Del Rey, Daizee Haze and MsChif, as well as Â TNA Knockouts: Awesome Kong, Madison Rayne and Daffney.Â Former Knockout Roxxi,Â better known as Nikki Roxx in SHIMMER, will also be making her return to the company forÂ Volume 23. Last,Â butÂ not least,Â WWE’sÂ newest developmentalÂ Diva, Serena Deeb will be challenging MsChif for the SHIMMER Championship Title.Â This should be a good one!

In the meantime, hop on over to Shimmerwrestling.com andÂ get your collection up to date, if you haven’t done so already.Â For those of you who love a good spoiler, Volume 23 match results can be found after the cut.

2. AMBER O’NEAL defeated the debuting TENILLE (trainee of Lance Storm and the second female graduate of Storm Wrestling Academy in Calgary) via backslide with a bridge.

4. SARA DEL REY defeated MADISON EAGLES following the Royal Butterfly. The first several minutes of the match displayed both women’s chain wrestling skills, while the action got turned up several notches during the final moments as both women fought for the win. Though Madison was able to counter the first Royal Butterfly attempt into a Northern Lights Suplex, Del Rey was able to work Madison from Tilt-a-Whirl Suplex position into butterflying Madison’s arms and planting her into the canvas for the three count.

In an interview taped inside the ring and an empty Eagles Club, SHIMMER Correspondent VALERIE MALONE interviewed SHIMMER Champion MsCHIF about her defense later in the show against SERENA DEEB.

5. LUFISTO defeated “The Rate Tank” KELLIE SKATER (also making her SHIMMER debut) following a Burning Hammer. Prior to the match, Skater ran her mouth on the microphone, proclaiming herself to be “virtually indie-structible,” challenging anyone in the locker room to face her. LuFisto answered.

6. NICOLE MATTHEWS wrestled DAIZEE HAZE to a 20 minute time limit draw, in a match that earned a standing ovation from the fans in attendance. The final seconds of the bout saw both women battle for leverage in a rolling cradle as time expired. Fans chanted for five more minutes, but Matthews refused and returned to the locker room.

SHIMMER Correspondent AMBER GERTNER interviewed ALLISON DANGER in the ring. Danger discussed giving birth to her first child during the SHIMMER off season, and how she is now focused on getting revenge on PORTIA PEREZ in their upcoming Street Fight. Portia interrupted, and the two exchanged words face to face. Perez spat part of her chocolate chip cookie right in Danger’s face, prompting a brawl which required several wrestlers and referees to pull the two women apart.

8. SHIMMER Tag Team Champions ASHLEY LANE & NEVAEH defeated “The International Home Wrecking Crew” RAIN & JETTA (with LACEY) two falls to one in a Two out of Three Falls Match to retain the titles. Lacey revealed herself to be the other individual to receive a SHIMMER manager’s license when she ran to ringside toward the end of the first fall, rolling over an inside cradle behind the referee’s back to give the IHWC the victory in the first fall. The champions earned the second fall with an O’Connor Roll. The third fall saw the IHWC use a chain to score the pin, but referee P.J. DRUMMOND came to ringside and informed Senior Official BRYCE REMSBURG about it, who quickly found the chain, and ordered the match to be re-started. Ashley & Nevaeh soon after hit their STO/Yakuza Kick combo to score the pinfall and retain the titles.

9. “The Croatian Panther” WESNA BUSIC defeated CHEERLEADER MELISSA following the CB4 Driver. This match was the continuation of the rivalry which started in Europe several years ago, and caught wrestling fans’ attention in ChickFight rings. During the closing minutes of the match, ANNIE SOCIAL came to ringside once again to scout talent, which served as a distraction for Melissa, who left the ring and got right in Social’s face. This allowed Wesna time to recover inside the ring, and ultimately hit the CB4 Driver for the pin. After the match, Wesna celebrated with Social, as Annie declared on the microphone that she was taking Wesna to the top, and will make sure that Melissa never comes anywhere near a title shot.

10. SHIMMER Champion “Your Soul’s Tormentor” MsCHIF defeated SERENA DEEB following the Desecrater to retain the title (her ninth defense). Serena hit the Spear on MsChif, but the momentum sent Chif all the way to the floor, and Serena couldn’t go for a cover. When she was finally able to drag her back inside the ring and go for the win, enough time had passed that MsChif was able to kick out. As MsChif went for the Desecrater, Serena was able to roll through the attempt, but Chif held on and continued to roll all the way back to a standing position to hit the maneuver and score the pin. SARA DEL REY entered the ring and got in MsChif’s face, declaring she’s coming to get “my belt” back. AMAZING KONG then approached the ring as well, indicating that she too wants the title. Kong attacked MsChif, and Del Rey joined in. CHEERLEADER MELISSA quickly hit the ring with a steel chair in hand to run off Del Rey and Kong.