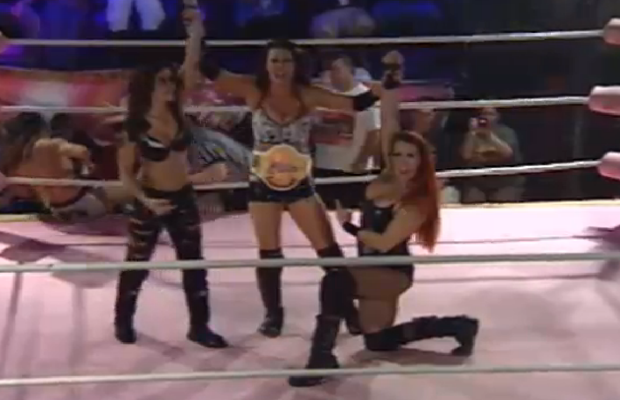 It was the night an entire year in the making, and the plan was straightforward: This was going to be the night a young, mighty heroine would rise to the challenge, valiantly seeing off all who stood in her way to be crowned the first-ever SHINE Champion. A fighting champion, a just champion, ready to benevolently lead the company into its second year and defend her title with honour, pride and courage. After all, evil never prevails in the end, right?

Au contraire. Last night at SHINE 11, not only did evil most certainly prevail, but it did so fair and square!

Okay, perhaps not entirely. But let’s look at the circumstances: Valkyrie entered the SHINE Championship tournament with huge question marks hanging over their heads. Allysin Kay‘s suspension leading to her exclusion from the tournament – with partner Taylor Made following suit in protest – meant that Valkyrie’s only representation in the tournament would be group leader Rain and the wildcard of the stable, Ivelisse, with neither having particularly easy draws.

Ivelisse’s road to the gold started off brightly in the Bracket B four-way qualifying match, defeating Amazing Kong, Kimberly and Angelina Love after blinding Kong with an eye-rake, making Kong inadvertently hit Love with the Implant Buster and allowing the Huntress to make quick work of the deranged Kimberly, taking her out with the Code Red to advance to the tournament proper. Meanwhile in Bracket A, Taylor Made’s last-minute replacement LuFisto defeated Nikki Roxx (accompanied by her new manager Daffney), Mercedes Martinez and Su Yung in a superb, frantic, blink-and-you’ll-miss-it match to complete the quarter-final draw that saw the rising star Su Yung – although unsuccessful – deliver a monumental performance, not fazed whatsoever by the presence of the three veterans in the ring with her.

The quarter-finals commenced in violent fashion, as Saraya Knight and Jessicka Havok went to war at the Orpheum, taking the match from the ring to the stage to the bar and everywhere in between, and including a frankly insane spot where Havok piledrived Saraya onto the stage floor. Finally, after fifteen minutes of chaos, the referee reached the end of his tether, resulting in a disqualification for Saraya for lamping Havok in the head with a steel chair. Saraya seemed not to care in the slightest, continuing her assault on the Havok Death Machine before being dragged to the back by SHINE officials, leaving Havok – one of the early favourites to win the whole thing – maimed and doubtful for the rest of the tournament.

In total antithesis to that match, another one of the betting favourites, Leva Bates, found herself in quarter-final action against her close friend Mia Yim. Leva – decked out in black Spiderman garb – would ultimately come up short in this fantastic match, which twisted and turned slowly before descending into its scintillating finale where Mia kicked out of Leva’s Pepsi Plunge and put her away with a high-angle German suplex from the second rope. An awesome performance – and display of sportsmanship – that saw both young stars take their games to a new level.

Valkyrie’s quarter-finals were slightly more straightforward affairs, as Rain began her tournament against a LuFisto still sore from her qualifying match earlier on. Despite a brave effort from the Super Hardcore Anime, Rain’s freshness gave her a clear advantage, and she rolled LuFisto up with the help of a distraction from April Hunter and a handful of tights to advance to the semi-finals. Meanwhile, Ivelisse’s wave of momentum continued as she defeated another of SHINE’s breakout stars in the hugely popular Santana in a back-and-forth affair, avoiding her Shining Star Press and replying with a devastating kick to the head to make it two out of two for Valkyrie and set up the very real possibility of an all-Valkyrie final.

For those wishing for that outcome, things got off to an excellent start, as Jessicka Havok limped out for her semi-final clash with Rain only for Saraya Knight to follow suit and continue her onslaught. After another intervention from SHINE officials, Havok had no choice to forfeit the match, fast-tracking Rain straight to the final. It proved, however to be a double-edged sword, as Ivelisse was forced to come back out to the ring having had only minutes to rest, for her match with Mia Yim. Despite a spirited performance from Ivelisse, it was clear that Yim had the upper hand, so Valkyrie cohorts Rain and April Hunter decided to help even the score a little. The plan backfired though, as a freak miscommunication caused Rain, with her back turned, to accidentally smack Ivelisse right in the kisser with the cast around her arm, allowing Yim to roll her up and put her one fall away from wrestling history. Ivelisse was less than impressed, and despite – it would seem – accepting Rain’s apology, there can be no doubt that Ivelisse will feel utterly robbed. Will this be the start of a Valkyrie civil war?

Before the final began, SHINE Vice-President of Talent Relations Lexie Fyfe was present with the SHINE belt and an important announcement for Valkyrie: that in the interests of fairness, April Hunter and Ivelisse were barred from ringside. Much to Rain’s chagrin the match began Valkyrielessly, with both women starting off cautiously, keeping each other grounded with submissions, before picking the pace up in the final stretch and finishing when Rain got her knees up on Yim’s moonsault and replied with a crushing Rain Drop for to get the clean pinfall and walk out with the SHINE championship firmly around her waist.

SHINE 11 can certainly be considered up there with SHINE’s best shows of the past year. Some unorthodox booking aside (although I’m sure not without good reason), the matches all ranged from above average to superb, with the weakest probably being the final (again understandable, given both women had pulled double – or in Yim’s case triple – duty last night). Rain’s victory puts Valkyrie firmly in the driver’s seat of the promotion, and the clean win – as well as Ivelisse’s magnificent showing over her three matches – only serves to cement their credibility as the badass heels they truly are.

Mia Yim deserves a huge pat on the back for her performance, especially her bout against Leva Bates – a real Match of the Night candidate along with Havok and Saraya’s carnage-fest. The show also leaves plenty of loose ends left to be tied – who will be the first in line for a shot at the title? Will Jessicka Havok get her revenge on Saraya Knight? How will Daffney’s newest clients Nikki Roxx and Solo Darling fare now the Scream Queen is in their corner? And will we see a power struggle in Valkyrie’s hierarchy over the coming months? I for one cannot wait to find out. Roll on SHINE 12!

What did you think of SHINE 11?