SHINE 16 in Review: The Era of Ivelisse Begins 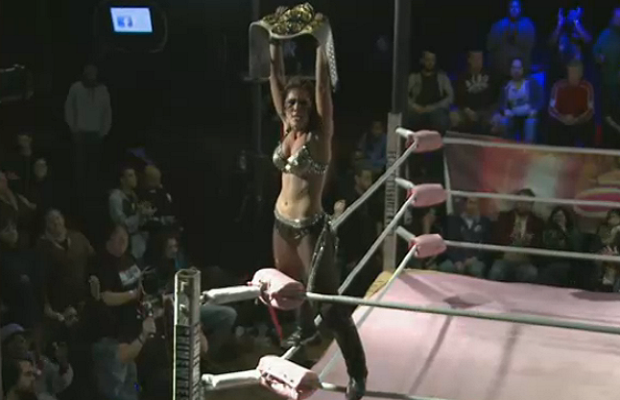 With her SHINE Championship match against Valkyrie leader Rain imminent, number one contender and fellow Valkyrie member Ivelisse found herself in an internal struggle between her own ambitions and those of her group. The biggest threat to Valkyrie’s stability had come from within – but Ivelisse seemed confident that as long as the belt remained within the group, then everything would be just fine.

In the opening seconds of the match the pair teased the possibility of collusion, as Ivelisse dropped the ground after Rain’s “fingerpoke of doom” attempt, only for Rain to break the cover and lie down in kind. However, as Ivelisse leant in to return the favour, Rain reeled her in with a small package, forcing Ivelisse to kick out and sending the match well and truly underway.

What transpired was a match every bit as exciting and high-octane as what you’d expect when there’s this much on the line, with both women bringing out a number of big moves – and kicking out of a fair few as well, much to the astonishment of the commentary team of Lenny Leonard and Rob Naylor, who did a great job of selling the moment from the announce desk. With flurries of strikes so raw you could almost feel them yourself, and near-fall after breathtaking near-fall as the pair’s Valkyrie team-mates looked on at ringside, the match came to an end as Ivelisse landed a huge Code Red to pin Rain and become the second SHINE Champion in history, cementing her position as women’s wrestling’s hottest property and sending the rapturous Orpheum audience into delirium.

It’s what happened next, though, that really sent shockwaves through the building as Rain helped Ivelise up, hugged her and affirmed that as long as title was in Valkyrie’s hands, all was okay…but that Ivelisse was no longer a member of Valkyrie! Made in Sin and April Hunter then pounced on Ivelisse like ravenous hyenas, causing the entire roster to intervene and break up the carnage. Then, as the dust began to clear, Serena Deeb – who had made her first appearance at SHINE that night – attacked Ivelisse from behind with the championship belt, before revealing a Valkyrie t-shirt. Ivelisse had been replaced.

Serena herself had been in what had arguably been the match of the night up until the main event, as she made her SHINE debut against the ever-popular and ever-improving Santana Garrett. The pair put on a wonderful exhibition of chain wrestling, with Serena eventually getting the win with a Spear and showing exactly what Valkyrie see in her. Ivelisse was known for being Valkyrie’s utility player, a versatile trump card, and Serena is most certainly an ideal person to fill in such a position in the group.

Meanwhile, Nevaeh and Leva Bates slugged each other senseless in an all-out brawl after their hostile exchanges in promos and social media took their feud over boiling point, even marring the ten-bell salute to Mae Young at the start of the show with a short confrontation. (Tasteless? You decide!) This animosity continued in the ring, with Nevaeh dominating in long stretches of the contest while Leva, stood her ground, taking some serious beatings but never backing down. Indeed, it took a combination of a superplex, Death Valley Driver and German suplex in succession for Nevaeh to finally seal her victory, but Leva came out of it having more than proven herself as a worthy competitor in the ring, gimmicks or no gimmicks.

The other plum tie of the show was the second match in as many shows between former-friends-turned-bitter-enemies Jessicka Havok and Allysin Kay. A double disqualification at SHINE 15 resulted in this match being made a No DQ contest, and the pair embraced this with relish, Havok taking out the referee by accident with a big boot then both women commencing to tear each other to pieces, using chairs, a thumb-tacked baseball bat, a rubbish bin, the referee’s belt and the entire ring as weapons, culminating in a brutal stalemate as both cancelled each other’s chair strikes out and sent each other crashing to the mat with a devastating Yakuza kick apiece, giving the referee no choice but to count Kay and Havok both out. A superb outing in a feud that is sure to be continued next month at SHINE 17.

Elsewhere, Mercedes Martinez defeated Su Yung in a solid match. Martinez got the upper hand early on, starting off with the Three Amigos and hitting a Fisherman Buster on the final one but the resilient Yung (who it was nice to see not relegated to the opening match of the card for what would have been the sixth show in a row) was able to fight back as the match went on, landing an impressive senton to Martinez on the outside and briefly locking in Yellow Fever. For a match by two women seemingly going through the motions on the SHINE midcard, this was a fine bout.

It was also a clean sweep for Daffney‘s new and improved All-Star Squad, as Amazing Kong made light work of Taylor Made, new recruit Kimberly‘s resurgence continued as she defeated Sojo Bolt in a decent opening contest, and the newly-formed tag team of Solo Darling and Heidi Lovelace defeated the S-N-S express in a great match that sends a serious message to the other duos of SHINE as we approach the SHINE Tag Team Championship tournament next month.

Leah Von Dutch can’t quite boast the same success, coming up short in her match against Angelina Love. It was a good performance by both women, with Angelina getting the win with a sunset flip. Von Dutch’s new veteran-hunter dimension to her character is great, and with any luck we’ll see her try her hand at taking on a few more women with experience at future shows. Finally, Amber O’Neal made her return to singles action in winning fashion against La Rosa Negra, getting the pinfall with a bridging backslide I could watch again and again and never get bored of.

Trite as it is to say, SHINE continues to get better with every show. Another card with no dud matches, and a few truly great ones, along with a feelgood title change and a shock turn of events to follow up. Ivelisse fully deserves her victory – she’s undoubtedly the most consistent and exciting performer on the SHINE roster right now – and with the number of people waiting on the sidelines for a shot at her title it’s safe to say we’ll be seeing our fair share of classic championship matches over the coming months. The two highly personal feuds between Leva and Nevaeh and Jessicka Havok and Allysin Kay continue to keep me transfixed on what will happen next, and the All Star Squad’s rise as a stable to challenge Valkyrie opens a lot of possibilities – starting with next month’s SHINE Championship tournament.

Meanwhile, the dynamic of Valkyrie has changed immensely, as not only did Serena join the group, but Rain announced her retirement from wrestling after the show – and this time it seems to be for real. Rain can definitely look back proudly at her career – particularly what she’s helped to create here at SHINE over the past year and a half – and we all wish her the very best in whatever she decides to do next. But for Valkyrie, the quest for dominance in SHINE continues, and without their leader. We’ve all seen what happens when a band changes its lead singer – sometimes its galvanises them into producing their finest work yet (AC/DC), while other times it leads them down the painful road to stagnation (Van Halen) – and Valkyrie find themselves at this very fork in the road. Which one will it be – Brian Johnson or Sammy Hagar?