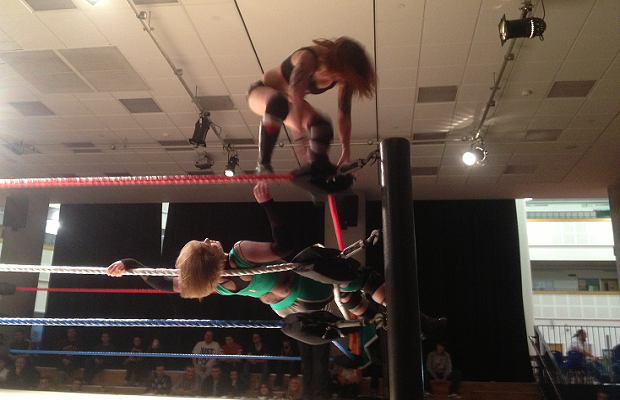 New UK promotion LCW Roses had their first show yesterday, “Roses Rumble”, at Brockington College in Leicester, and featuring an eclectic cast of established and rising stars of the British scene and beyond.

The main event of the show was the eponymous “Roses Rumble”, a fifteen-woman elimination Rumble contest, with the winner getting the chance to pick their opponent at the next LCW show on the 1st of March. It was the rest of the show, however, which planted the seeds for the events that would unfold.

The show began solidly, with Pollyanna Peppers (clad in Shaun of the Dead attire) picking up the win in a decent affair against the “Living Dead Girl”, the House of Pain trainee Felony, accompanied by her imposing boyfriend, Barricade. For someone so inexperienced, Felony has her gimmick down to an absolute tee and impressed greatly with her movements and mannerisms, exuding a confidence in her character that is unbecoming of someone so early into their career. The match itself was more than adequate, playing to the women’s strengths and hiding their weaknesses, and with plenty of comedy interspersed for good measure.

Following that was a tag team contest between the Pin-Up Princesses (Nadia Sapphire and Violet Vendetta) and the makeshift team of Viper and Jenna. The four put on a good performance, with Viper doing a great job of leading the less-experienced wrestlers throughout the match, which ended with a vicious Michinoku Driver from Viper to Violet to give her team the victory. After the match, Nadia turned heel on her partner, attacking Violet and leaving a shower of feathers from her boa on the ring mat, before aligning with Faith Lehaine.

The match of the show belonged to “The All-American Canadian” Addy Starr and “The Fighting Irish” Rhia O’Reilly, whose experience in the ring really showed as they had great, hard-hitting match that ended in disqualification when O’Reilly avoided Starr’s Sliding D and responded by choking Starr out on the ring ropes for well past the five-count. An excellent contest, with a finish that simply screams ‘rematch’.

Meanwhile, another newcomer, hometown heroine Shauna Shay, impressed in her first match to a public audience – and her first against another woman – as she took on the Glamour Gym’s Carmel Jacob. Shay was the most over face on the card with a large number of friends and family in attendance, and she dealt with the pressure impeccably, showing a great deal of potential in her performance and handling her responsibilities very well, while Jacob played her role perfectly, acting as the dominant heel for much of the match and taking a considerable amount of weight off Shauna’s shoulders, picking up the submission victory with a rear naked choke then continuing the assault after the bell for extra heat.

The two main events of the show tied into each other, as Nikki Storm, Kay Lee Ray and Erin Angel faced off in a three-way dance, with the winner getting the coveted number 15 spot in the show’s eponymous Roses Rumble immediately afterwards, and the woman who takes the fall having no choice but to enter at number 1.

The match itself was solid, as was expected considering the calibre of the three athletes involved. Nikki Storm continues to be the best heel in all of British wrestling, letting her opponents slug it out while sneaking around the ring looking for openings and riling the crowd up with her vitriolic outbursts. Kay Lee Ray and Erin Angel both put in fine performances too, with Ray taking a number of wince-worthy bumps, before ultimately taking the fall to a Perfect Storm.

Visibly selling a damaged shoulder, Kay Lee Ray entered the fifteen-woman Roses Rumble at number 1. Much of the order was kind of predictable, but necessary for getting as much out of each feud in the short time afforded to the match, with Addy Starr and Rhia O’Reilly both entering one after the other, as did Nadia Sapphire and Violet Vendetta. Shauna Shay then got the biggest face pop of the show as she got her revenge by eliminating Carmel Jacob, before falling foul to Viper, who eliminated four women in the match.

With Kay Lee Ray and Nikki Storm both in the final four, the finish we all expected to happen was looking more and more likely until Viper threw Kay Lee out of the ring, the young Scot taking a huge bump in the process. Both referees went over to check on her, with Viper eliminating Storm while their eyes were diverted. Viper was then eliminated by Polly Peppers, whose celebration was cut short as Storm re-entered the ring and eliminated Peppers to win the Rumble. However, due to her unsporting way of winning, her right to choose her next opponent was taken away, and it was announced that at the next show she’ll be facing the ‘Amazon’ Ayesha Ray in singles action.

All in all, this was a very good show for what it was. Some interesting booking, combined with an immersive approach in giving experience to the less-experienced women – which can only mean a constantly-improving product from a wrestling point of view – and the fact that the UK now has another stomping ground for its women wrestlers gives LCW Roses a surefire thumbs up from me on its first outing. The next show is on March 1st, and it will certainly be interesting to see how the promotion grows after a solid debut.