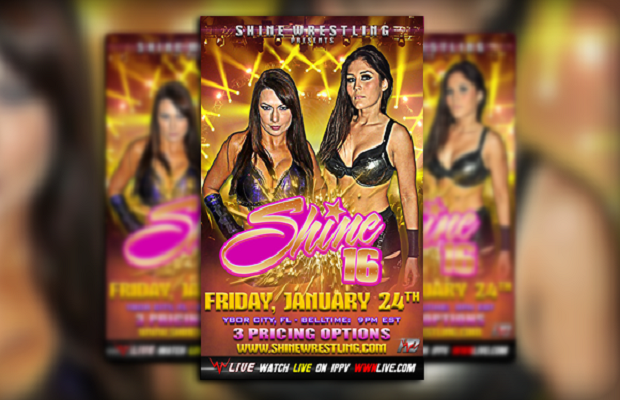 SHINE returns to the Orpheum in Ybor City and live on iPPV tomorrow night for SHINE 16, with a number of scores to be settled.

In the main event, Valkyrie face the biggest threat to their stability yet as SHINE Champion and group leader Rain finds herself defending her title against her friend and stablemate Ivelisse. The Huntress has already met Rain’s ire by accepting the title shot in the first place, and with so many possible scenarios – and with Rain and Ivelisse’s Valkyrie stablemates looking on – this will undoubtedly be one of the most anticipated contests in SHINE’s short history.

The same can be said for the No Disqualification match between former best friends Jessicka Havok and Valkyrie’s Allysin Kay. This feud went into full swing at SHINE 14 when Kay double-crossed Havok in favour of Valkyrie, and their match at SHINE 15 ended in a double disqualification, paving the way for this no-holds-barred, anything goes contest that is sure to tear the house down, probably even literally.

Meanwhile, it’s beyond personal for Leva Bates and Nevaeh, whose heated exchanges in promos and social media leading up to their match have added a new dimension to their ongoing feud. Nevaeh’s questioning of Leva’s attitudes to wrestling prompted one of the best promos Leva has ever made, and at SHINE 16 we’ll see the two of them battle it out in the centre of the ring with no gimmicks and no stipulations – just straight out wrestling.

The show will also mark the SHINE debut of Serena Deeb, who goes up against Santana Garrett in singles action, while Leah Von Dutch‘s mission against the veterans of the industry continues as she goes one-on-one against Angelina Love in a battle of the blonde Canadians.

See below for the full card so far:

SHINE 16 comes to us live from the Orpheum in Ybor City, Florida at 9pm Eastern (2am GMT). Click here to order the show.