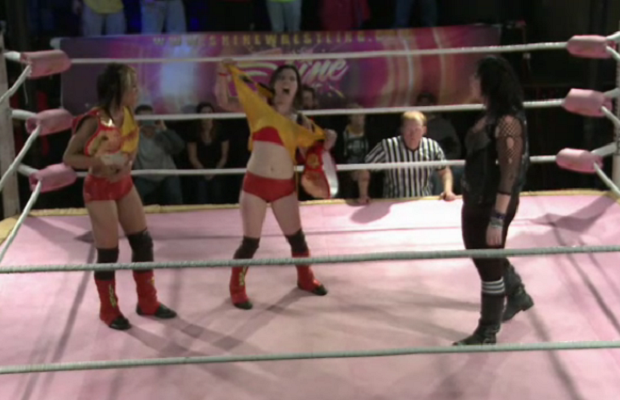 In the creation of great artistic projects, it often takes a while before the final brick is laid or the final brushstroke is applied. It is better, many would argue, to start small and add things gradually. Rome wasn’t built in a day, after all.

So now, eight months after the SHINE Championship was introduced and over a year and a half since the maiden SHINE event, the roster’s talented pairs competitors finally have a target to be competing for, in the shape of the bright pink SHINE Tag Team Championships.

Eight top-class teams threw their names in the hat – some highly experienced, some new-fangled and untested – and over the course of the night they battled it out in the ring with all guns blazing, until just two teams remained: the dastardly duo of SHINE stalwarts Made in Sin (Allysin Kay and Taylor Made, accompanied by April Hunter), and the hair-raising, lightning-speed Lucha Sisters (Mia Yim and Leva Bates), decked out this time in Hulk Hogan-style red and yellow “Luchamania” attire.

Made in Sin’s route to the finals began in fine fashion, defeating The West Coast Connection (Su Yung and Tracy Taylor) in a solid match thanks to a devastating Seven Deadlies to Yung, who worked the opening match of SHINE for the umpteenth time. Somebody give this woman a push already! Their journey then took them to a semi-final clash with The Buddy System, consisting of Heidi Lovelace and Solo Darling, accompanied by their All-Star Squad companions Daffney and the new and rejuvenated Kimberly. The Buddy System had defeated the well-travelled team of Legendary (Malia Hosaka and Brandi Wine) in a great contest that saw the younger team dominated in large spells by the seasoned veterans only to make a classic tag team comeback to pick up the win.

Their semi-final was a frenetic, all-out affair, and certainly Lovelace and Solo’s most impressive outing since forming as a tag team at the previous SHINE show. The finish came when Kay clotheslined Lovelace to the outside, preventing Solo from making the tag and leaving her stranded at the will of her wiley opponents, who hit a devastating Seven Deadlies once again to advance to the final and have the opportunity to bring glory back to Valkyrie.

As for the Lucha Sisters, they arguably had a slightly harder path to the final, getting past Kimber Bomb (Kimber Lee and Cherry Bomb) in the first round in a highly entertaining match that saw all four women raise their game in style, with a superb display of double-team action and a heart-stopping package piledriver finish by Mia Yim. Despite their defeat, Kimber Bomb gave more than their dues and with any luck will become regular fixtures in the promotion’s tag team division.

Yim and Bates’s semi-final opponents were the S-N-S Express (Sassy Stephie and Jessie Belle, accompanied by Nevaeh), who had earned their spot by defeating MsEERIE (Christina Von Eerie and MsChif) with impressive ease, keeping MsChif isolated as the legal woman of her team for most of the match, then having Nevaeh pull the referee away as Von Eerie went for a fall, incensing her and causing a slight argument with her partner, before Stephie capitalised with a Kiss My Sass for the victory.

Their match against the Lucha Sisters was probably the best match of the tournament, with both teams producing a stellar performance in the ring. However, Nevaeh’s interference was not enough this time round, as Leva gave her and Stephie their comeuppance with a beautiful flying senton to the outside, allowing Yim to land a 450 Splash on a helpless Jessie Belle, driving her knees into Belle’s chest and putting her team through to the final.

The final itself was another highly enjoyable match, and both teams showed no signs of slowing down despite pulling triple duty on the show. While the contest twisted and turned, Jessicka Havok – the erstwhile best friend of Allysin Kay – showed up at ringside, startling Kay and allowing the Lucha Sisters to wrap things up, Leva hitting Kay with a Sliced Bread and Yim following up with a Quebrada for the three-count and the gold. Though the Havok interference was a little cheap for a face victory, the performances more than made up for it, and it’s safe to say both teams can congratulate themselves on a fantastic display all night long.

Despite the tournament taking up the lion’s share of the show, the match of the night belongs to Ivelisse and Mercedes Martinez, who faced off in Ivelisse’s first defense of her SHINE Championship. A match that began with calculated, clever chain wrestling and slowly snowballed into a breathtaking exchange of strikes and power moves, it showed exactly why these two women are considered among the best on the planet at what they do. Ivelisse makes stealing the show look easy, and given that she’s done it on pretty much every SHINE event she’s wrestled at, she deserves that belt firmly around her waist for a long time to come.

One non-title or non-tournament match took place on the show, with Serena Deeb providing some consolation to her Valkyrie stablemates. With April Hunter at ringside, Deeb took on Angelina Love in a battle of two of the most highly-respected and highly-regarded wrestlers on the scene. As expected, the match didn’t disappoint, with Serena playing the heel brilliantly and Hunter doing a great job causing trouble from ringside. After accidentally spearing referee Frankie Gastineau, Serena met the ire of Love’s Botox Injection, but Love was unable to get the fall. After some more interference from Hunter, Serena hit another spear for the victory, then to rub salt in the wounds locked in the wince-worthy Sweet Serenade while the remaining Valkyrie members joined in the fray. A great match – though I was one of the few iPPV viewers who was able to see it in full, as the WWNLive stream went down for a large amount of the audience at the start of the match.

All in all, an extremely good show, with no bad matches and the last five being truly great. With the exception of the minor streaming hiccup, the feed was top-notch for the entire show, and the tournament showcased an abundance of tag team talent that hadn’t quite been seen in SHINE previously to the extent it could have. A well-liked, extremely gifted team in Mia Yim and Leva Bates now hold tag team gold in the promotion, and with so many teams suddenly on their tails, anything could happen in the coming months. Valkyrie’s reshuffle has given them a second wind, with Serena breathing new life and adding a new dimension to the stable. Meanwhile, SHINE’s pièce de résistance and MVP Ivelisse continues to produce masterpiece after masterpiece, and with the wealth of opponents standing in waiting for their chance at the championship, her magnum opus may still be yet to be written. Just think about that for a moment. SHINE 18, bring it on!