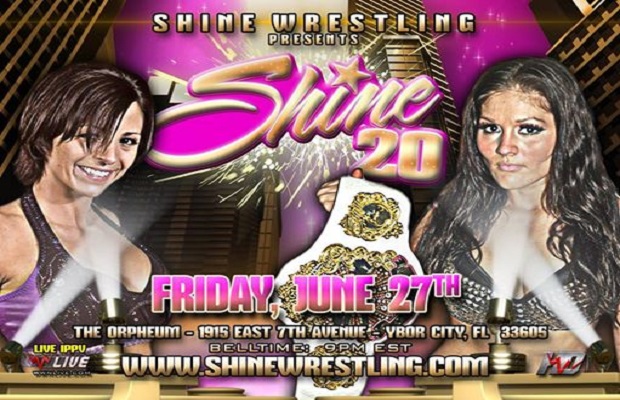 SHINE set another landmark this Friday as they return to the Orpheum in Ybor City, Florida for SHINE 20.

Topping the card is one of the most hotly-anticipated title matches in SHINE history as Ivelisse puts her SHINE Championship on the line against Valkyrie leader Serena Deeb. At SHINE 19 last month Deeb sent shockwaves through the company as she pinned the champion cleanly during the show’s epic 10-woman elimination tag main event, and with Ivelisse’s own history with Valkyrie and with both women considered among the very best in the world at their craft, this is a match that wrestling fans simply will not want to miss.

Another plum tie of the card is the Last Woman Standing match between bitter former friends Jessicka Havok and Allysin Kay. Since Kay’s initial betrayal of Havok way back at SHINE 14 in October the pair have faced off in various stipulations four times, once with a double disqualification, twice with a double countout, and once with a no-contest after Havok was run over by a (still unknown) accomplice of Kay’s in the car park outside the venue. However, with this stipulation in play, countouts and disqualifications are now meaningless. Surely on Friday we’ll see one woman emerge victorious once and for all? Rest assured, this is going to be violent.

Rounding off the headline matches of the night will be SHINE Tag Team Champions, the Lucha Sisters. Leva Bates and Mia Yim will make their fifth defense of their titles (and third on a SHINE show), finding out whom their opponents are earlier on that night as the challengers are decided in a Four Corners Survival Match. The S-N-S Express (Sassy Stephie and Jessie Belle), the Kimber Bombs (Kimber Lee and Cherry Bomb), Legendary (Malia Hosaka and Brandi Wine) and Daffney‘s Buddy System (Heidi Lovelace and Solo Darling) will be the four teams vying for a shot at the titles.

Elsewhere, the immensely popular Candice LeRae makes her long-awaited SHINE debut as she takes on Nevaeh in what is sure to be an exciting outing, while “Portugal’s Perfect Athlete” Shanna takes on La Rosa Negra in a rematch from SHINE 18. Shanna won their last contest, but with pro boxer Noemi Bosques in Negra’s corner this time, Negra may well find herself with the moral support to even the scores.

Finally, Valkyrie’s newest recruit, Su Yung gets another chance to impress following her fantastic performance in last month’s elimination tag match as she goes one-on-one with relative rookie Justine Silver, while Leah Von Dutch continues her “Dinosaur Hunter” crusade against the veterans of the industry as she takes on Amber O’Neal in singles action.

SHINE 20 takes place at 9pm Eastern (2am GMT) on Friday, June 27th, and will be broadcast live on iPPV. You can order the show at WWNLive.com.

Diva Dirt will have live coverage of the show.