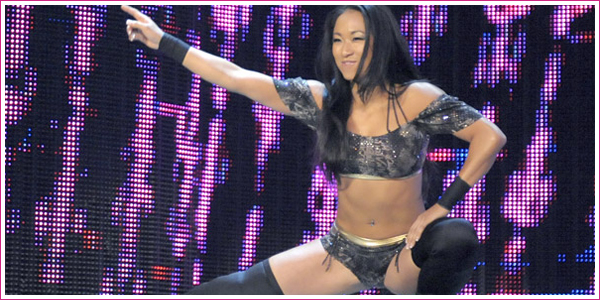 As soon as she signed with WWE, I knew I was going to write this post eventually. Reports suggest that WWE officials are considering Gail Kim‘s return a ‘flop’ and are scaling back her initial push. As some commenters rightfully pointed out yesterday, how the hell is Gail supposed to get over when she – nor any of the other Divas – are given the opportunity to cut promos and develop character?

All we’ve seen of Gail so far is her coming down to the ring, wrestling and leaving again. So far she’s been a complete mute.

Another complaint on their behalf is that she hasn’t impressed people with her wrestling skills and she can do ‘a lot better’. In comparison to her matches in TNA, you can hardly expect her to match the same quality given the watered down wrestling WWE churns out. Not to mention, she’s not exactly working with the same caliber of talent she worked with in that company. Given the fact that she’s had to accomodate ‘the WWE style’, I think all of her matches thus far have been just fine.

Mind you, all this could simply be conjecture from ‘internet newz’ sites considering she’s been on a three-week losing streak. It simply could be someone reading too much into it. As a wrestler, you win matches and you lose matches to advance storylines. Right now, with Melina as the incoming face Women’s Champion, it doesn’t make sense to push Gail as the top babyface and contender for Melina- it makes sense to push Michelle as the top heel and contender for Melina. I don’t know about you, but I certainly feel there’s some correlation between these ‘reports’ and her losing ways on TV of late.

Either way, Gail emerges the winner with her reported $400,000 salary.