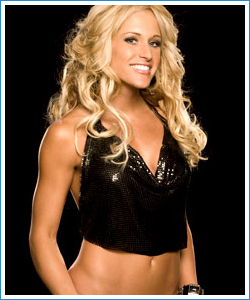 Joining SmackDown following her stint in the 2004 Diva Search, Michelle McCool had many false starts on the blue brand. And it wasn’t until 2007, that fans really stood up and took notice of the All-American Diva.

Between 2004 and 2006, Michelle went through many changes: From an early wrestling start against the likes of Melina to turning heel and feuding with Ashley. But in 2007, the Diva came out of her shell and took her turn in the spotlight. As Torrie Wilson bowed out of the scene, Michelle stepped up to become SmackDown’s all around good girl.

The Diva’s ever improving wrestling skills were on display in matches against Victoria and before long, she was named SmackDown’s top Diva. From there, it was all systems go as Michelle became the first ever Divas Champion in July ’08, marking a seminal moment for the Divas – past and present – of Friday Night SmackDown.

Since losing the title to Maryse in December, Michelle has shown a new side to her personality and is now SmackDown’s resident bad girl. Despite the moodswings, Michelle continues to fly the flag for SmackDown, a brand she has now been part of five years – longer than any other Diva in the show’s history.

Check back later for #1