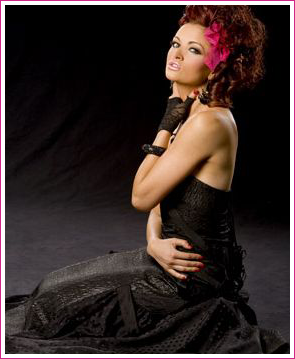 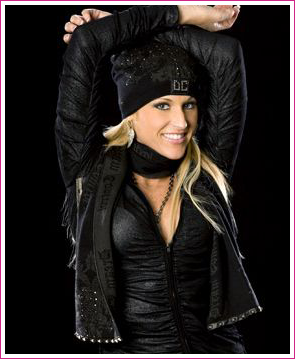 Okay not really, but with these photoshoots it wouldn’t be too tough. Maria and Michelle McCool are their own brands of ridiculous in their new photoshoots, “Touch of Color” and “Dream Control”, respectively. We’ve already seen a bit of Maria‘s look from the New Years photoshoot, and it’s as ridiculous now as it was then. The hair, the flower, the glove, and the dress.. All of it’s just over the top, and it doesn’t help to have such dramatic expressions, either. It honestly looks like a “glamour shot” out of the 80s, and I’m pretty sure she wasn’t going for that.

Michelle is a walking billboard for Dream Control, apparently. Some quick Googling of that name brought me to a designer hat company, which I can only assume is the same company that outfitted her in a black skullcap and scarf. Some people can pull off all black, but Michelle isn’t one of them, at least not in this fashion. It’s all overkill, like she kept layering stuff on and forgot to say “when”. You know the old saying attributed to Coco Chanel, “Always take off one thing before leaving the house.”? Yeah, Michelle apparently hasn’t.