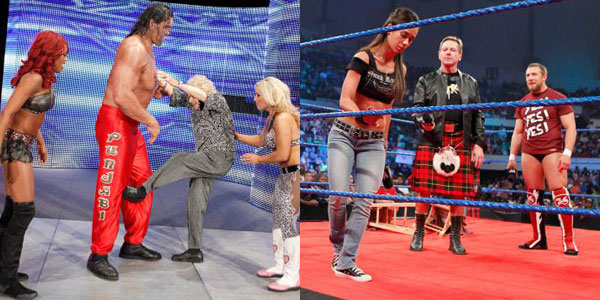 Good day everybody, and welcome to this week’s special SUPER (aka Tuesday night live Edition of) SmackDown! This was a very special night for one AJ, as she, alongside her spooning lover, Daniel Bryan, were both guests on an incredible edition of Piper’s Pit. Alongside that, we also get to see what I’m now calling the most random match to ever take place in WWE, as SmackDown’s version of Planet Funk, Natalya, Alicia Fox, and The Great Khali, took on the amazing Drew McIntyre and equally amazing Bella Twins (Brie & Nikki)! If that wasn’t random enough for you, Mae Young also appears at the end of the match, giving a big old kiss to one of the competitors (I’ll let you guess which), AND we even get a reference to former Diva, Jillian Hall (who trended worldwide because of it). There’s no way you could’ve even predicted what happened, so let’s dive right in.

We return from a break to see an image that I’m sure represents the level of crazy we are about to witness as Alicia Fox and Natalya dance and twirl around the ring with The Great Khali. I’m immediately in heaven at this beautiful odd representation of Planet Funk as we find out this will be a six person tag match against Drew McIntyre and the Bellas! The bell sounds as Khali and Drew start things out with a lock up. Khali shoves him back and beats him in the head, sparking McIntyre to tag in Nikki Bella. He then leaves the ring and claims he is better than this!

Nikki and Alicia both run into the ring with a SICK double facebuster that pretty much makes my own face hurt. She lifts Fox up for a bodyslam, but Alicia escapes out the back and counters into a beautiful Northern Lights Suplex for a miraculously(!~) quick victory. SmackDown’s Planet Funk celebrates their win with some tribal dancing up the ramp to basically make my year with this random beautiful image… but SUDDENLY out comes Mae Young! Mae walks out from the back and shakes her hips, as Khali steps down to one knee per her kicking his leg and the two proceed to make out! Natalya, Alicia, and myself share the same cackling reaction, as this segment comes to it’s random end to the sound of Booker T discussing a whole chicken making a good soup.

We head out to the arena as Rowdy Roddy Piper makes his way to the ring, sparking Michael Cole to enlighten us with the trivia that the last time Piper’s Pit was held on SmackDown, it involved a woman (named Jillian Hall) getting a big mole/growth bitten off of her face! Piper steps into the squared circle and begins to speak about how he misses the fans as a “Roddy” chant breaks out. Lylah Lodge’s World of Hurt trainer then brings the attention to Daniel Bryan, depicting how he lost the World Heavyweight Title to Sheamus at WrestleMania in 18 seconds. Piper then proceeds to instruct Mr. Footage Man to play some footage for us (WTF?!), as we are shown a clip of Daniel dumping AJ last week and breaking all of our hearts in the process.

Back to Piper, he introduces us all to the god of wrestling himself, Daniel Bryan! Bryan walks out in his new “YES! YES! YES!” shirt and climbs into the ring as we find out about a new article relating to kissing causing chaos in WWE which I will promptly read when finished with this. Daniel lets everyone know that he just had a meeting with Johnny Ace and he will be getting his rematch for the World Title at Extreme Rules. Not only that, but it will also be contested in a two out of three falls match. Daniel then adds that AJ, aka the reason he lost his title, will be nowhere near the ring for that match. Piper dismisses that bit of info. Instead, he states that they are on HIS show and HE wants to bring AJ out! Heck yeah!

“Let’s Light It Up” graces my ears with its presence, as AJ then proceeds to grace my eyes with hers. She walks into the ring, looking quite upset over last week’s actions I’m sure. Piper kisses her hand and she thanks him for inviting her to Piper’s Pit. AJ then awkwardly says “Hi, Daniel” to her now ex-boyfriend, to which Piper reprimands her. AJ says that people just don’t understand what a good guy he is deep down! Piper tells her to speak her real feelings and leave the political answers at the door, but she just cannot get over Daniel (and as well she shouldn’t, because I love them together more than life itself).

AJ claims that the drama between them is HER fault, which sparks a little smile from Daniel. She proceeds to beg for forgiveness from Daniel for her mistake at WrestleMania, and offers to make it up to him! Roddy tries to motivate AJ to stand up for herself, telling her that Bryan is just USING HER! Daniel quickly interrupts him and states that if AJ meant that she loves him, she will leave the ring right now. Piper tries to convince her to stay, as we get our own version of AJ’s Choice! She looks on unsure of what to do, as an “AJ” chant breaks out! Ultimately, she decides to do as Daniel says and leave the ring!

Bryan tries to follow behind her, but Piper screams that he isn’t finished with him! He talks about how he has three daughters because of the WWE Universe (oh my), then instructs Bryan on things you do NOT do to a lady, such as telling her to “shut up”, yell at her, or use her as a human shield. Piper dubs Daniel a coward, and states that the only bright light he sees is that, at Extreme Rules, Sheamus will plow Daniel down twice! Daniel fights that accusation by claiming that he’s going to show everyone that he’s better than Sheamus, which will be a slap in the face to the World Champion, the WWE Universe, and Roddy himself right across the face… before BAM! Daniel smacks Piper right in the mouth and heads up the ramp chanting “YES! YES! YES!” Tremendous!

Thoughts: Starting with the match, I know I’m going to be in the minority but I kind of loved it. I hated that it was all of five seconds long, don’t get me wrong, but I like seeing fresh things. This may get some hate, but I had more enjoyment watching it than I would seeing something go seven or eight minutes that we’ve seen happen ten times already and I can basically call move for move. It was random, fresh, (somewhat) fun, and harmless. I never look for these live SmackDowns to have anything worthwhile for the Divas in terms of matches (mistletoe on a pole, anyone?), so I didn’t get my hopes up for anything to blow me away. I don’t understand Nikki Bella flopping from face to heel and getting pinned, but I’m sure knowing WWE, they’ll just pretend it was Brie if they decide Nikki is a face next week. Also, it was nice to see Natalya and Alicia Fox back on TV again as I feel like it’s been ages for both ladies (not counting NXT since I don’t get it on TV).

The Piper’s Pit segment was so beyond great for me. I don’t think I need to say how much Daniel Bryan and AJ are the best thing on WWE TV in my opinion (okay, tie with Planet Funk), but they really are. I love everything about the two when they’re on screen together and I never want it to end. AJ played her role extremely well, and I was really impressed with her on the microphone. I never thought she was bad or anything before, but this was probably one of her standout moments in WWE (promo wise) alongside the one where she told off Michael Cole. I love seeing her get to appear on such high profile segments with Daniel, especially due to her past and how hard she worked to get to where she is. It really couldn’t happen to a better Diva and I want it to continue for my entire life. Yes, I want 90 year old Daniel and 80 year old AJ on TV fighting about whether or not he should take her back!