SmackDown Redux (April 15th, 2011): Michelle Has Frankenstein Feet While Rosa and Edge Audition for a Telenovela 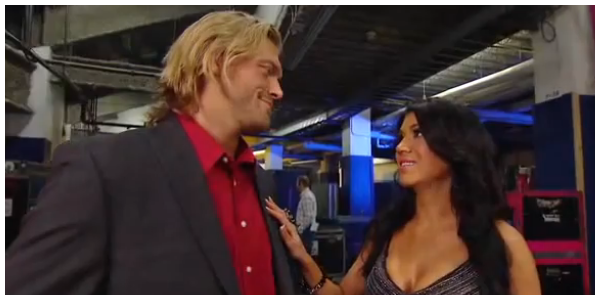 It’s poor form to jack my intro simply to gush about Edge but since this is my Redux and my platform, I’m going to do exactly that. Besides if you want to be technical he has starred in a couple of these Reduxes and he’s had more than his fair share of Diva storylines. Edge is a brilliant performer and someone who I’ve adored ever since I first got into wrestling. He has it all; looks, talent, charisma, and the ability to make you feel what he feels. On Monday night, when he shockingly retired, I felt numb. I felt like I had just lost a little piece of my wrestling heart. I kind of did, if you want to be fair. No heel has ever made me cheer for them louder and I swear it has nothing to do with the fact Edge is gorgeous or that we share the same birthday. Edge is just that talented. And he is going to be sorely missed. I truly hope everyone can recognize the brilliance that Edge brought to the table. Love him or hate him, he got you talking about him. And I respect the hell out of him.

Okay, now on to tonight’s show! My mascara is fixed. I’m not going to drown in my tears any longer. Last week, Beth Phoenix and Kelly Kelly returned to action with a victory over Michelle McCool and Layla. This week, Kelly steps back inside the ring to try and prove that her victory in the tag team match was no fluke. She takes on Layla, who’s desperate to try and repair her relationship with her former BFF.

Toss in a therapy session and Rosa Mendes auditioning for Telemundo’s hottest telenovela, Los Herederos del Monte, and you have this week’s amazing edition of the SD Redux!

The doctor welcomes both girls to their first session and immediately Michelle questions why they’re there. They’re not Brangelina, Beyonce and Jay-Z, or any other “couple” in the world for that matter. She also wants to know why Layla is holding her hand and promptly jerks it away. A tissue holding Layla tells Michelle that they’re a team, kind of like Burt and Ernie or “Thelmer” and Louise. Michelle rolls her eyes and corrects Layla’s pronunciation of “Thelma” and says it’s great that Layla wants to compare them to puppets and two characters who drove off a cliff together. Layla says they were best friends like she and Michelle used to be. Michelle places emphasis on the “used to be” part and both girls go silent for a moment.

Layla asks Michelle how her back is doing and Michelle snaps that it hurts because she’s been caring Lay since day one. Layla responds with “ouch” and that she was wondering about their match last week. The doctor tries to chime in but both girls simoltaneously cut him off and then scream stop. Michelle demands that Layla stop talking like her and stop trying to steal her spotlight, and her shoes. Layla finally fights back and says she carried Lay-Cool while Michelle was injured with her big, fat Frankenstien foot and Michelle just yawns. She points out how well that worked out for them seeing as how Layla always lost. Layla lets go with another “ouch” and admits that those words hurt. Michelle says that it needs to hurt because Layla goes out there every week and gets her butt kicked in the ring. Michelle goes on to say that Lay-Cool became “Un-Cool” the minute she got hurt and Layla attempted to take the lead.

Layla can’t believe what Michelle is saying to her. She says that she never went out there to try and take the lead. All she’s ever wanted is for them to be equals. Michelle scoffs and says that if Layla grows three feet, gets blond hair, and gets better in the ring, then they can talk about being equals. Okay so I’ll say it for Layla this time, ouch! Michelle gets up and leaves the session, and Layla remains parked on the couch. After a moment, she screams at Michelle “I’m keeping your shoes, Miss Thang!” and she forces a big smile as she turns to the doctor. Layla goes “soooo, same time next week?” and the scene comes to a close.

Miss Layla El needs to walk up to Michelle and be like “excuse me, but who got pinned at ‘Mania by Snooki?! Who is the real loser?!” I mean seriously. Don’t be so nice, Lay. If you’re going to go into battle with Michelle, you need to man up and fight fire with fire. This all started because Big Fat Frankenstein Foot got pinned by a reality show star. You may have lost 2309472304789234 matches, but you didn’t get pinned at WrestleMania, guuuuuuuuurl!

Now that I’ve gotten that out of my system, lets continue on!

Rosa and Edge are backstage once SmackDown returns to it’s regularly scheduled broadcast. The lovely Latina has a sad look on her face as she gazes up at the Rated R Superstar. The following is a word for word translation of the entire segment.

Rosa Mendes: “Oh pretty man, why are you leaving us? Please don’t say you are leaving the WWE because you want to spend more time with the amazing Diva Dirt SmackDown Redux writer, Cryssi! That’s not fair to the rest of the women who watch this show every Friday night just to see how amazingly gorgeous you are!”

Edge: “I have no idea what you just said but Cryssi is the most wonderful woman in the world.”

Rosa Mendes: “We’re going to miss you so much. No one has better street style than you do, except maybe Christian. I can’t imagine not oooohing and ahhhhhing over your fashion choices every week. Who else can be that fierce? Better yet, what other main event SmackDown star is going to share the main event with the Divas? I haven’t had my chance yet!”

Alberto Del Rio enters from stage left and walks up behind Edge and Rosa.

He extends his hand and the battle for my affections is on.

Edge knows that he has already won my heart and he intensely stares down Del Rio. After a few seconds and one creepy wink, Edge walks off. Perhaps Del Rio can go find Rosa and give her a storyline now. Hey Rosa! There’s your ticket into the main event. Work it, sistah!

And speaking of working it, Kelly Kelly did all that and then some. Lets take a look.

The smiley blond from Jacksonville, Florida makes her way to the ring first. She’s still sporting bad hair but what Diva isn’t these days? She plays to the crowd like usual once she gets in the ring and then it’s time for Lay-Cool’s entrance. Michelle and Layla walk out and while tries to do their ring entrance, a jolly green giant-esque Michelle denies her. Layla can’t believe it and the announcers hype the tension between the two former best friends. They show a video package highlighting last week’s drama and Michelle takes a seat at the commentary booth.

The bell rings and the match gets underway.

Layla gets things started with a kick to Kelly’s mid-section followed by a takedown. She drops down to the mat and begins to take her frustrations out on Kelly. She slams the back of the blond’s head into the mat a few times, then forces her to eat a face full of the sweaty, gross canvas. Layla tries to keep the attack going but once she brings Kelly to her feet, the former main-eventer mounts a mini-comeback. She Thesz presses Layla down and begins pounding away. She keeps the momentum despite Layla’s efforts and does her cool corner choke hold. After flipping to the outside and bringing Layla out of the ring, Kelly slams Layla’s face into the protective floor padding. She wants to continue her roll but Layla is able to muscle her off and send her crashing against the ring. Kelly hits her lower back pretty hard and Layla lunges for her.

Kelly moves out of the way and it’s Layla who crashes. The referee is counting and urging the girls to get back inside the ring. They’re not having it. Layla ends up shoved into Michael Cole’s Plexiglas box and she finds herself locked into a stare-down with Michelle. Kelly seizes the moment to turn Layla around, kick her in the stomach, and plant her with her finishing-like Facebuster. The referee forces Kelly into the ring and Michelle jumps off commentary and throws Layla in after Kelly. Well she tries to throw her in. The first attempt fails and just looks painful. The second try succeeds and Layla stares at her former partner like she’s crazy. Kelly comes up behind Layla and rolls her up, and like de ja vu… Kelly gets a win!

Layla is in shock. Michelle rolls into the ring and of course she begins to give it to Layla. Layla has no explanation, really. Michelle’s seemingly fed up with Layla’s losing ways and as she goes to leave, Layla stops her. Michelle roughly shoves Layla across the ring and storms off, leaving her ex-bestie confused and hurt. Michelle can be heard saying “good luck without me” as the scene fades.

Drama! I wonder if Michelle will show at couples therapy next week?

I loved this week’s episode of SmackDown. Couples therapy wasn’t as wonderful as I hoped, but I loved Layla deciding that she was going to keep Michelle’s shoes even though she made fun of her feet. I have my thoughts about where this feud is going to go but I’m going to keep them on hold for now. I want to keep a happy, positive attitude and ranting about my fears of Layla getting buried won’t maintain that rainbow of positivity.

The segment between Rosa and Edge was a nice touch. It just seemed fitting that the one man who’s had plenty of Diva storylines in his career go out with one more segment. I loved it. And I’m truly going to miss Edge more than most. From the bottom of my cold little heart, thank you Edge.

And thank you SmackDown writers for giving us a lot of fun things to talk about tonight. Kelly and Layla had a great match. The battle between Lay and Cool is on. Who’s side are you on?